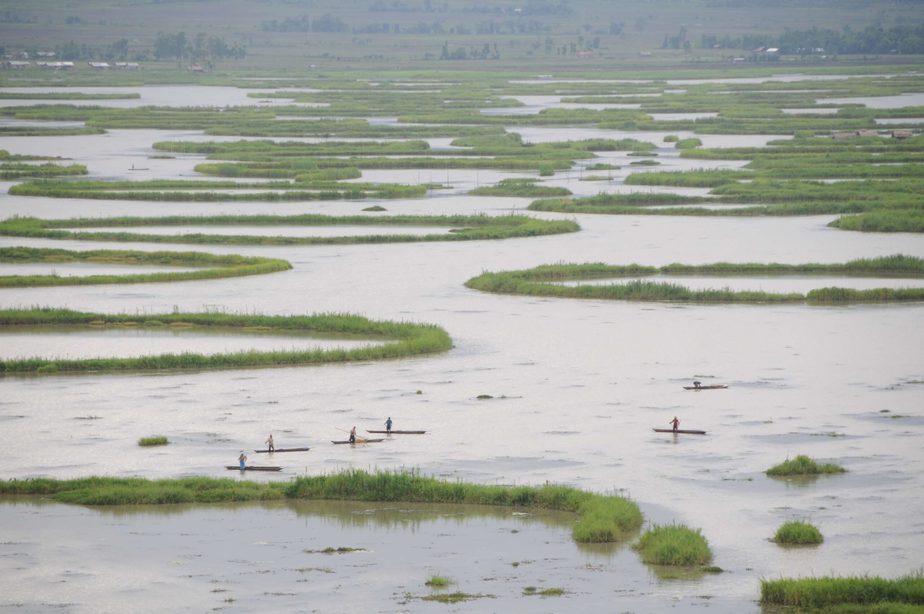 About 45 kilometres from Manipur’s capital city Imphal lies an ecological marvel. A string of wetlands and round floating biomass — locally called phumdis — take form in Loktak, which is north-east India’s largest freshwater lake. Loktak lives up to its name, which in Meitei translates to “where streams end”: close to 30 rivers and streams feed into the lake, creating a 287 square kilometre water body, which is roughly the size of 53,000 football fields. Besides being a sight to behold, the lake absorbs floodwater during the monsoon and supports the livelihoods of over three lakh people in Manipur throughout the year.

Slightly elevated landforms protrude around the southern part of Loktak Lake, which look like islands. One of these is called Sendra Island.

A quick Google search will tell you that Sendra Island is ‘the place to be’ if you are visiting Manipur, what with its sprawling resort, complete with a café and views on end. But the locals don’t always share the same sentiments about Sendra Island. “As with the lake and the other elevated areas, Sendra too was treated and used as commons by people here. They used to go there for recreation or some kind of social and cultural gathering. Now, since it’s a resort, locals who were once owners of the island have to pay to get on it,” says Ram Wangkheirakpam, who is the convenor of Ngamee Lup, a federation of small-scale fishing unions in Manipur.

It all comes down to one question — who can own and use this lake? Is it the fishers and agriculturalists, or private corporations and government bodies?

This question of access and ownership that Ram asks about Sendra Island is in focus once again with a new Mega Ecotourism Project that has been proposed in Loktak. 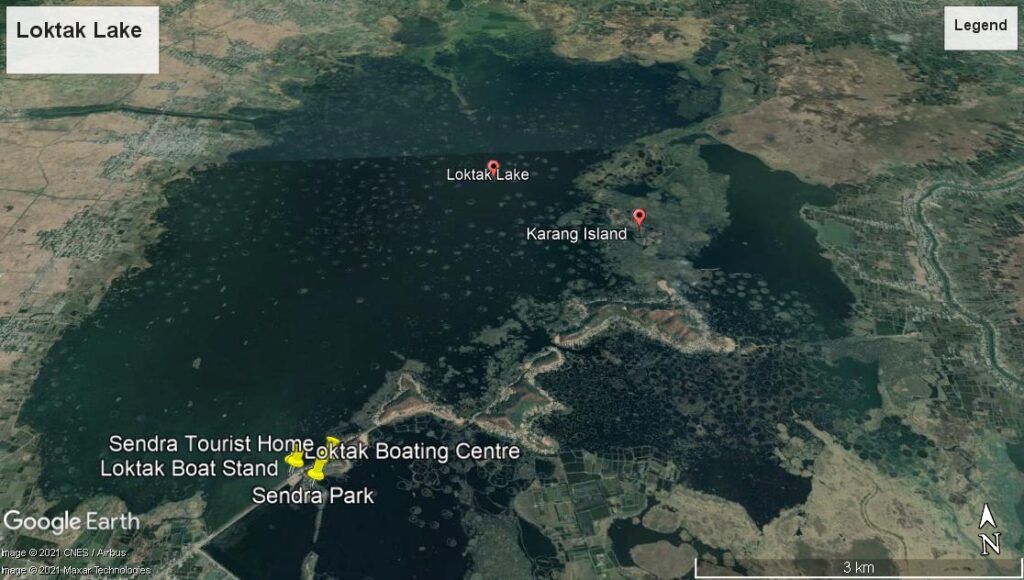 A-B-Cs of the Mega Ecotourism Project

In November 2020, the Government of Manipur invited tenders for a Mega Ecotourism project which will span over 82 hectares of the Loktak lake. Neighbouring the Keibul Lamjao National Park, the mega eco-tourism project proposes to build jetties, a resort, and a golf course. This “world-class tourist destination” will share its space with about 200 aquatic plant species and 400 faunal species, including the endemic and endangered brow-antlered Sangai deer and over 60 species of birds, most of which are migratory.

Despite the ecological diversity of this region, the state government sees this project’s implementation in Loktak as a gamechanger. After all, as they suggest, it will “change the socio-economic status of the State…” by providing alternate livelihood to the local population. They justify the ‘eco’ in the “eco-tourism” proposal by carrying out filtration and conservation in the lake.

The wetlands are also a Ramsar site, which are wetlands designated to be of international importance. But, as of January this year, “No-objection Certificates [NOCs] for the project have been received from Water Resources Department, Fisheries Department, Loktak Development Authority [the body under Manipur Government’s Forest and Environment which governs and administers Loktak], and the Forest Clearance is currently in process,” Avli Verma from Manthan Adhyayan Kendra, tells The Bastion. Manthan received this information through RTI applications.

In fact, the documents, as accessed by The Bastion, show that the Ministry of Environment, Forest, and Climate Change supported the proposal as well, albeit with suggestions. “It should be ensured that proposed activities do not contribute to the deterioration of the lake,” it said, in an office memorandum of January 2021.

This is not the first time that large-scale tourism is being promoted in the Loktak. In 2019, a revised Loktak Inland Waterways Improvement Project was introduced, which hoped to expand motorised inland transport into the lake and also attract tourists. As per the proposal, this would be efficient only by removing the phumdis, which were a hindrance to earlier inland efforts.

Loktak Lake sees few motorboats, that too in localized areas, used for connecting the islands of Thanga and Karang. But, most of the people living around the lake use dug-out canoes that tread slowly and lightly on the lake, allowing them to navigate through the myriad of floating biomass.

“These canoes are friendly to the fish, the aquatic flora, and the birds. Also, migratory birds spend a season here feeding and nesting, all of which need acute silence. Motorised boats will not be able to provide that, it is not a suitable technology,” says Ram.

Apart from bird and wildlife, phumdis are also homes to fisherfolk who mostly fish Phabounga (Pethia bizonatus), Mukanga or Mola carpet (Amblypharyngodon mola) and endemic, rare species of Pengba. They fish for subsistence, and also to sell in local markets. The livelihood security that this string of wetlands provide was reiterated amidst last year’s pandemic. “When the lockdown was imposed, many families who had migrated to cities came back to the Loktak lake and resorted to fishing, says Ram.

Owing to its hydrological and ecological network, Loktak forms over 50% of Manipur’s fish producing area. Moreover, layers of soil, plant and organic matter create these floating biomass, which makes it conducive to grow not just paddy but also other crops like water chestnuts and fox nuts, making agriculture another livelihood option here.

Removing phumdis then, would be a loss which the communities are raising red flags around. “These floating grasslands cannot be removed entirely; they are nature’s filtration system and habitat for many species. So essentially, the planners would have to do a balancing act for future management,” says Jayalakshmi Paonam, a research scholar with TERI School of Advanced Studies.

A large-scale project for tourism—whether through inland waterways or a mega tourism project—would not only impact the biodiversity of the region, but also privatise this commonly used wetland, limiting access to those who have been using these for generations.

This contention has also been voiced within meetings of the Manipur State Wetlands Authority (MSWA). “For both the projects, there are divided opinions within the Authority,” says a member who requested to remain anonymous. “Some members have urged for the need to have longer discussions to understand the impacts of these projects on the ecosystem of the lake, traditional fishery, and livelihoods of local fishers. Some even suggested revisions with inputs from wetlands experts, since the Authority rarely has any.”

So, can a different tourism model work better for Loktak?

“This is being called an eco-tourism project, but at the core of any such project should be the involvement of local communities in the decision making. That has not happened at all with the mega tourism project,” Ram points out. This is despite the suggestions made by the MSWA in the September 2020 meeting, as the RTI documents reveal. The members had suggested a “people-oriented approach” and commented that “willingness, support and cooperation of local people” would play an “important role” in the project’s successful implementation.

Instead, a community-based ecotourism initiative could gain popularity. “Some aspects of the mega-tourism project may be relevant, such as the case of homestays. In some parts of Loktak, homestays run by locals are already functioning,” remarks Jayalakshmi. “However, one would also need to ensure a system of waste management [if more such homestays get encouraged by the project].”

The question of waste disposal is an important one, especially for a lake that is slowly turning more toxic. Municipal waste and fertilizers from paddy fields flow into the lake via the several rivers that feed it, turning parts of the lake acidic.

What adds to the lake’s woes are the increasing anthropogenic activities on the phumdis. A 2018 study assessed the change in Loktak’s land use pattern of the last 38 years. They found that phumdis had decreased; that too, more than the increase in agricultural and settlement areas. These changes, the study had claimed, were affecting the fragile ecosystem of the lake and its aquatic ecosystem.

In order to keep this pollution in check and conserve, protect, and administer the lake, the Manipur Government implemented the Manipur Loktak Protection Act in 2006. To protect the phumdis, the Act prohibited people from building any dwelling on it. This did not end well. Five years later, the Loktak Development Authority burnt down over 700 floating huts.

Instead of such a blanket ban to minimise human activities, the lake could be mapped into different zones. “With that, each zone’s possible activities can be identified,” says the member of the MSWA. “Further, the Government needs to take up sustainable fishery plans so that local fishers can earn their livelihoods while engaging in non-destructive use of the lake’s resources.”

The Loktak lake is currently at the crossroads of development, where any hurried step could be a step back. Sendra Islands’ shift from being a free and commonly accessed landform, to its current avatar of privatized resorts is difficult to look past. While tourism might provide livelihood alternatives, the more important question at hand is what type of tourism. For those living in and around Loktak, the tourism model they are advocating for is one that involves them in making decisions that are truly beneficial for the ecology.

Loktak Development Authority was contacted for this story. The piece will be updated if and when they reply. | Featured image courtesy of Sharada Prasad (CC BY 2.0).

Creating Marine Scientists Out of Divers