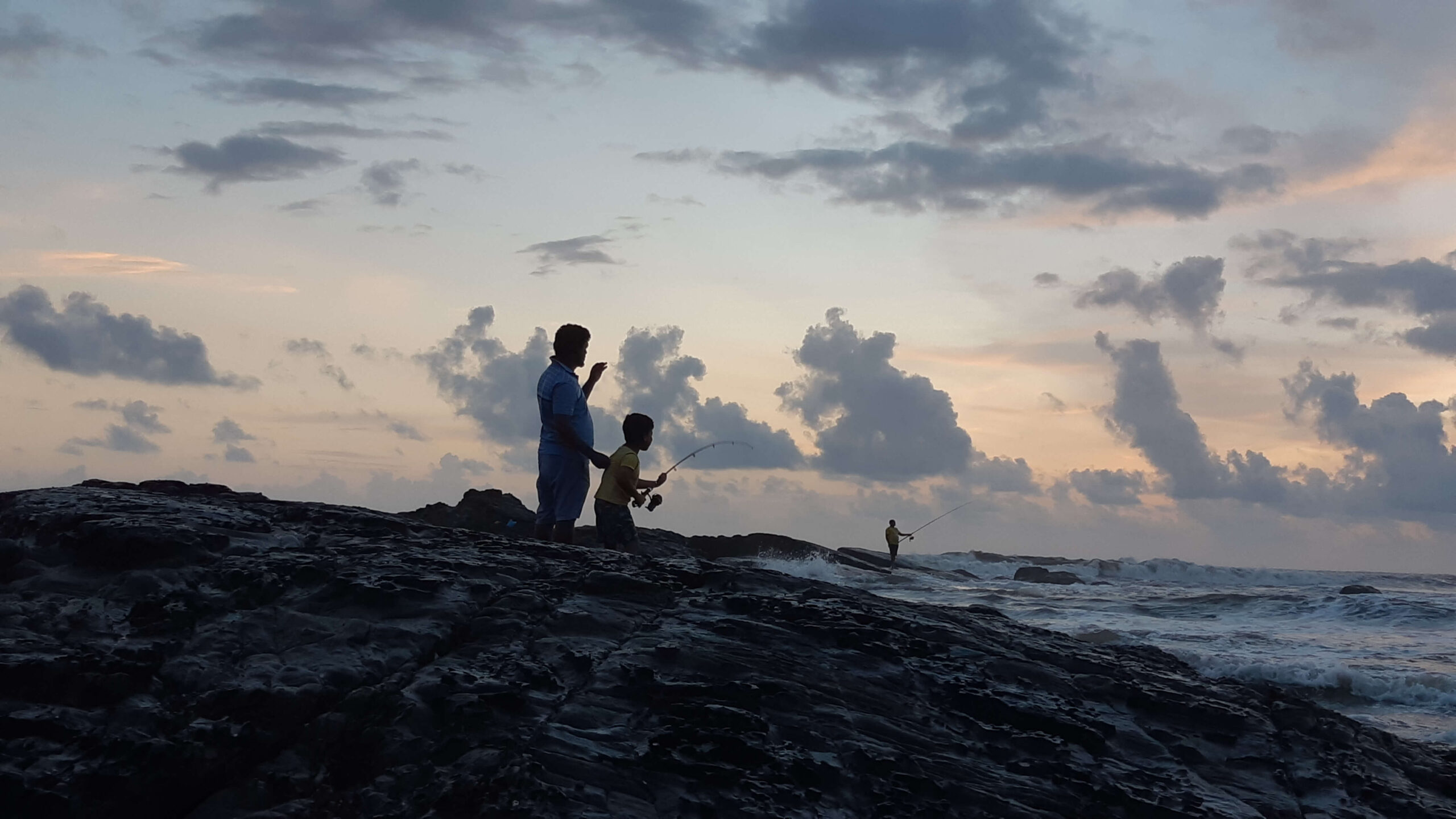 The biggest habitat of our planet has a new spotlight in India, driven by the possibility of enormous economic benefit and easy-to-adopt restoration solutions. What stands in its path are deteriorating ecosystems and a rapidly-changing climate. Ten coastal states and several offshore islands within its territorial waters make up India’s ~7500 km long coastline; it plays host to globally recognised biodiversity hotspots and marine habitats, as well as over 12,000 documented species of migratory and endemic marine wildlife. This rich bounty of wild coastal and marine habitats offer ecosystem services and mitigation solutions to at-risk communities living off India’s coasts.

Yet, at the same time, India’s ascendancy as a geopolitical power in the Indo-Pacific region is growing, with a significant influence in mercantile trade, ports, fishing and maritime security. Today, as transnational dialogues move towards creating a universal framework of development goals according to what each nation ought to do with the unfence-able marine boundaries of their blue habitat, a pressing question that is often asked by dissenting coastal communities and our eroding coastlines still lies unaddressed:

How, or in what ways, does India envision Her oceans?

After gaining independence in 1947, ocean-based development in India prioritised meeting the structural requirements of maritime security and trade. The country’s gradual descent into other ocean-based sectors like tourism, fisheries, and the notification of marine protected areas and national parks, signalled a shift in this perception; these sectors displayed the scale and might of an ocean based-economy for India. These sectoral changes were adopted differently across coastal states and islands. Tamil Nadu, for example, focused on fisheries-related development – including structural requisites like the use of technological tools and subsidies to increase the quantity and extent of yield to a higher catch. On the other hand, Goa quickly adopted tourism in the 1960s, primarily marketing beach-front ocean recreational services. Leaders that followed have taken great pains to protect and sustain Goa’s tourism industry. Around the same period, Andhra Pradesh witnessed a port-development boom and emerged as an important mercantile trading port in the Indian Ocean.

Our idea of “sustainably” using our oceans, say for example by equipping traditional fishers with new skills like seaweed farming or mangrove forestry, is premised upon a shiny-new gold standard that is known as the “blue economy”. Touted by many nations to be the future of ocean-based ecosystem development, such an economy claims to strike two targets — one, of realising the economic potential of a nation’s oceans, and two, of sustaining its biodiversity and health — with one arrow.

Whether India has visualised Her ocean to be an inexhaustible resource, a boundary to showcase brawl and might, or a catalyst to steer towards maritime-trade prosperity, the impacts of ocean development and legislation in the midst of climate change has brought to light the delicate unfolding of the ocean’s health, services, and economic sustenance. This undoing poses myriad challenges to India’s “blue” projects and the outcomes of this vision.

The Looming Storm of Unknowns

“We would witness severe storm warnings, but [Cyclone Tauktae] was one of the worst storms we’ve seen on this (West) coast,” a merchant navy captain says, recalling his difficulty with safe anchoring and port parking in the Mumbai Port. The captain’s assessment is a fair one: Cyclone Tauktae was one of the five worst cyclones ever to be recorded over the Arabian Sea.

The impacts of climate change have manifested into many “unknowns” — severe storms with oft-negligent forecasting, expanding dead zones, increasing instances of jellyfish and harmful algal blooms — let alone what mitigating and adapting to these changes entails. Transnational anxieties surrounding rising sea levels have created black holes in understanding the future of littoral nation-states.

India’s coastal inhabitants are well-acquainted with the ‘unknown’ nature of climate change. “If we cannot protect our boats and nets from the storm, the younger boys from the village will not take up fishing… they may end up indulging in vices like drug and alcohol addiction,” a fisherman in North Goa rues, as he explains his anxieties in the aftermath of Cyclone Tauktae. This is where the “blue economy” finds its support, as an ecological-economic theory of developing ocean sectors on the premise of protecting and maintaining a blue ocean. In this regard, India has leant towards ‘holistic’ tourism and port development to create economic opportunities, as Niti-Aayog’s report on ‘sustainable tourism development’ in the Lakshadweep and Andaman and Nicobar Islands indicates.

This approach has created ambiguity in understanding the ‘blue’ in India’s blue economy. Is developing infrastructure upon previously undisturbed, protected, or indigenous “blue” marine habitats a prerequisite for certain economic outputs?

India’s coasts and islands are experiencing the jet-speed implementation of an ambiguous theory that is still being tested within academic corridors and dialogue. This “blue v/s economy” impact can be seen in protected areas like the Galathea Bay National Park in the Nicobar Islands, which was denotified in January 2021 to accommodate a port-terminal development project. Just a month later, in February 2021, “the MoEFCC released a National Marine Turtle Action plan [which listed] Galathea Bay as one of India’s most important turtle nesting sites”, Pankaj Seksharia points out.

India’s blue economy model also suggests “necessary explorations” for small-island developing states (SIDS), with options like deep-seabed mining. All this, while data on the ocean is still nascent, with only about 2-5% of the ocean having been studied globally. This approach of situating and planning economic structures upon all-too-many looming unknowns is a grim feature of India’s ‘blue’ strategy of ocean-based services. Research on coastal disaster resilience and innovation in technology for predicting, adapting to, and mitigating the impacts of our ever-changing oceans is a critical need.

Sector-Silos in the Maritime Domain

‘Silos’ were a business concept that first garnered attention when impaired outputs were produced because of inefficient data-sharing, the withholding of information, or access restrictions on data. Sector-silos are a common occurrence within various, often competing sectors and departments of the bureaucracy in India.

Similarly, India’s maritime domain has several established as well as under-represented and unrecognised sectors. Some sectors, like Ports, (under the Ministry of Shipping and Port Trusts) are set to implement the visions of the ‘Sagarmala’ port development project which aims to increase India’s maritime trade, port expansion and port-storage efficiency. Simultaneously, the Ministry of Environment, Forests and Climate Change has launched “Project Dolphin” and “Project Turtle” to safeguard critical beaches and coastal habitats for the conservation of the species.

Sector-silo objectives drive weak and often unsuccessful economic outcomes in the maritime domain. Sectors are bound to overlap and conflict with each other, like port development and marine wildlife management; lengthy top-down governance models, rushed environment impact assessments and poor data sharing between government departments makes outcomes mucky. Cross-sectoral activities could be undertaken to bridge the gap, but this would require greater clarity and consensus on a few common objectives and vision for India’s oceans.

The Common Objective of Ocean Economics

The coastal regulation zone (CRZ) notification was released in 1991 to regulate and distribute the use of the coastal and marine commons between several sectors. Fast-forward to 2021, and we have seen this policy amended about forty times in the last three decades. It has changed thrice, with the current CRZ 2019 being the latest addition.

The Notification imposes legal safeguards for natural beach and marine morphology, especially in the sensitive intertidal zone and critical wildlife areas; however, there have been instances across the coastline wherein operations of industries in a sector like mining are prioritised over the sustainability and economic capacities of other ocean-dependent sectors, like the livelihoods of traditional fishers and tourism.

In fact, most projects and state policies measure a ‘permissible-flexibility’ when the extent of economic capacity feasible within a certain part of the ocean is concerned. Deep-sea mining activities, for example, are economic explorations to the bottom of the ocean floor that have been budgeted for in the interest of dredging minerals, all without a prior coherent environment-ocean impact assessment.  In the words of Madhavan Nair Rajeevan, the secretary of the Ministry of Earth Sciences, India’s “Deep Sea Ocean Mission” is an ambitious ₹4000 crores project launched in 2021 that aims to “to map and exploit…the ocean’s living and non-living resources — for minerals, for energy, for drinking water”.

India’s recent ocean-based economic endeavours struggle with two fundamental issues: that promoting sustainable livelihoods and economic dependence is bound to be a difficult and risky goal when the ocean in concern looms with “unknowns”.

Taking A Re-Look at India’s Oceans

The COVID-19 pandemic has altered the deliverables and consequently, the objectives of several sectors in the Indian economy. The ocean-maritime sector is no different, with a larger focus on a ‘brown’ to ‘blue’ economy transition. As Richard Matthews explains, a “brown economy” is one that runs on environmentally destructive practices, dependent on fossil fuels, coal, oil and gas. Over the past six months, India’s port-infrastructure development and ocean-mining policies make one question whether such a blue economy can ever be achieved via what seems to be a structurally and strategically “brown” lens to economic activity.

The pandemic-induced economic constraints on the national economy call for sustainable ecosystem services, if India’s coasts are to ever be able to economically sustain and adapt to the ever-changing ocean. Irrespective of how much we understand of what we have discovered, India is in a critical stage of directing ocean policy domestically, and in the high seas. Cautious, calculated steps to expand this vision must account for economic growth alongside a future of sustenance and adaptability around Her oceans.