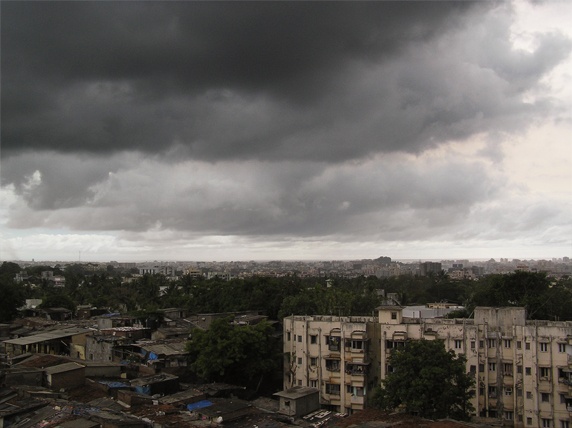 On June 5 at 4:27 pm, Navdeep Dahiya tweeted: “Strong thunder clouds in South Haryana expanding northeastward…hails are possible over Gurgaon, Rohtak… and in parts of Delhi in the next 30-120 mins.” By 5:05 pm, rain and light hail shattered against my balcony in South Delhi. “These types of hourly forecasts are called nowcasts,” explains Rohtak-based Dahiya, aged 20, and the founder of Live Weather of India. On this Facebook page, Dahiya has been posting analysed short-term weather forecasts since 2016. “Even though nowcasts have error margins, they are far less than those of seasonal forecasts [which predict the monsoon 2-3 months in advance].”

India releases seasonal forecasts 2-3 months before the southwest monsoons, in April of every year. These forecasts give a probabilistic prediction of the monsoon’s performance between June to September.

The rain-bearing clouds hit Kerala first, before moving along India’s west coast and towards central and northeast India. An accurate forecast of their arrival and performance is critical for the roughly 54% of the country’s population that is engaged in agriculture in one way or the other. It is also crucial information for India’s crores of fishers, as most communities do not venture out to sea in the monsoon months. Accurate forecasting also helps disaster management authorities prepare better for untoward weather events.

But, as Dahiya pointed out, these forecasts come with a warning: a margin of error of +/- 5%. This explains why between 2013 and 2018, both the Indian Meteorological Department (IMD), India’s nodal public forecasting agency, and the privately-owned SkyMet had missed the monsoon forecast’s target for 5 out of 6 years as a 2019 Reserve Bank of India analysis shows. Compared to these forecasts, in reality, the monsoon over-performed in 2013, and underperformed in the remaining years.

So, why is accurate monsoon forecasting hard to achieve?

A Science Open to Interpretation

A simple answer is this: weather depends upon ever-changing atmospheric conditions, making it a “non-deterministic” phenomenon, as Dr. D.S. Pai, the Head of Climate Research and Services at the IMD calls it. “Whatever predictions we do for seasonal forecasting [2-3 months in advance] will have to deal with the uncertainties of atmospheric patterns, which allows us to predict only a large range of rainfall with an error margin,” he adds.

This year, the IMD has updated its predictions by adopting a high resolution Multi-Model Ensemble forecasting system. As the name suggests, it couples various global climate models used by climate prediction and research centres across the globe. The Ensemble allows for multiple combinations of predictors like sea and land surface temperatures. With five such predictors, for instance, 31 different models could be possibly generated. Out of these, the best few would be chosen, reducing the overall forecast errors. The Ensemble will be used by the IMD in addition to the Global Climate Forecasting System—a dynamic model in use at the department since 2017. It analyses the global interaction between the Earth’s oceans, lands, and atmosphere and provides hourly data updates on them. India’s current use of these global state-of-the-art models has been able to reduce forecasting error margins in the last few decades—from 7.94% between 1995 and 2006, they have dropped to 5.95% between 2007 and 2018.

Much of weather-related data is available in the public domain, which makes it possible for non-governmental agencies like Dahiya to also forecast the weather accurately. But multiple data sources and possible interpretations also create a problem: different agencies end up with different forecasts. Since 2012, the privately-owned SkyMet and the publicly-owned IMD have provided varied information about the monsoon’s arrival and performance. On May 30th of this year, SkyMet announced that the monsoon had hit Kerala, while the IMD insisted it will arrive only over the next three days. It ultimately arrived on June 4th.

“Models give us some indication [of monsoon dates and performance], but these cannot be taken at face value. Models depend on different outputs and estimates like oceanic and surface temperatures. So, we take stock of all information available, study and analyse it, and then arrive at a forecast. This is why different agencies arrive at different dates—different people operate in different agencies, they might be using different models, and so their findings and interpretation will be different,” shares Air Vice Marshal (AVM) JP Sharma [Retd], President of Meteorology at SkyMet.

AVM Sharma’s comment leans gently into a fascinating conclusion—monsoon forecasting is as much an art of interpretation, as it is a complex science.

Forecasting in Times of Extreme Weather

The multi-model ensemble is a step in the correct direction for the IMD, which had been using an IMD-developed Statistical Ensemble Forecasting system since 2003 until recently. It was well established that the singular statistical model might not be able to keep up with rapidly changing global and regional climates. This older model assumed that the correlations—like those between land surface temperature and monsoons — would remain constant in the future. But, as extreme weather conditions would suggest, these correlations do change.

We did a preliminary study looking at Delhi’s data for the last 10 months. We were surprised to see that each month had broken one or the other previous year’s records. There are variations in the weather now from previous historical trends, and it is becoming increasingly difficult to forecast depending on previous records and correlations.

75% of India’s districts have experienced extreme weather events since 2005, reflecting India’s rapidly changing weather patterns that don’t align with its past climatic records.

But, Dr Arthy Menon, a Research Scientist at the UK-based University of Reading, makes an important distinction here. “Extreme weather events are more challenging to forecast in long term seasonal forecasting,” says Dr Menon. “But for short-term forecasting, current models have been quite precise in predicting when and where cyclones are about to make landfall about 3-4 days in advance. This has resulted in quick evacuations along [India’s] coasts.”

While accuracy in weather forecasting is important, Dr Menon raises a parallel concern: how can this information be communicated to governments and people efficiently?

Forecasting for the People

Around 2016, Dahiya realised that his co-residents in Rohtak mostly chose to receive weather forecasts from the local newspapers, which were not always credible. To bridge this gap, he created Live Weather of India. With over 32,000 followers on Facebook—mostly farmers from Rajasthan, Uttar Pradesh, Punjab, and Haryana—the engagement on the page remains high. ‘When is it going to rain in my village?’ is the most popular comment these days, most of which are diligently replied to by Dahiya.

“For sowing their seeds or while applying fertilizers, whether it will rain or not in the next 5 days is key information for farmers. This is why I usually do short-term weekly, daily or hourly forecasts, since most of their questions are for short periods of time,” says Dahiya.

IMD’s Dr Pai points towards another set of information that people ask for these days. “People now also want to know the impact of the monsoons, such as how different areas in the same city would be impacted by the rain,” Dr Pai comments. IMD began impact-based weather forecasts in north-eastern India in 2020, and for Mumbai in 2019. These colour-coded forecasts tag regions based on their risk levels due to the rains.

“For such forecasting, the department is now encouraging more interdisciplinary approaches, like with health experts” shares Dr Pai. He is referring to the department’s initiative to forecast vector-borne diseases like Malaria by studying the relationship between rainfall and temperatures conducive for mosquito breeding. The same is also being done to issue advisories for summers by announcing weeks particularly favourable to dehydration or heat strokes, all in a bid to provide people with more impact information. “Sometimes health-related data, like the number of deaths caused due to heatstroke, is not always available. This makes such forecasting challenging.”

But, this health-related data is not the only type of data that is difficult to get.

“Our ability to do accurate analyses is dependent upon the availability of data,” shares Dahiya, speaking on behalf of independent forecasters. “But, many of India’s automatic weather stations are dysfunctional at present.” This monsoon season, only 16 of the IMD’s 21 automatic weather stations are functional in Kerala. The rugged geographies of some mountain regions like the Himalayas or the Western Ghats make it challenging to construct and maintain weather stations, leading to minimal local data being recorded.

For tropical regions like ours, there is an additional challenge. “As compared to mid-latitudes, the hotter conditions of tropics can cause quick clouds to form and turn into rain clouds very soon. These [nuances] often cannot be captured in the models India currently uses, because current models capture developments occurring at larger resolutions [around 12 kilometres of scale], while these quick changes occur at smaller scales [between 1-2 kilometres]. “But again, this is not a problem unique to India.” shares Dr Menon.

To make more data available locally, Menon shares an innovative solution. “Some countries like the United Kingdom encourage weather enthusiasts to set up small meteorological observatories in their gardens, the data of which is uploaded to a database. The Meteorological Department also tracks these updates,” she says.

Indian schools and colleges can similarly set up observatories which will not only lead to [the pumping of] more local-level weather data into the system, but it will also be an educational opportunity for the students.

As The Bastion has previously reported, such a citizen science project has been experimented with by a government school in Sikkim. The lab, inaugurated in 2019, makes real-time, everyday weather data available — all of which is operated by students.

Another alternative is to have a public-private partnership for weather forecasting.  “If we [SkyMet and IMD] pool in our assets for this common cause, we will have better operations and better results. But currently, we are working in silos,” shares AVM Sharma.

IMD’s Dr Pai also agrees on the need for collaboration, albeit of a different kind. “Being a nodal agency, IMD has to make these short-term and long-term forecasts, but where we lack today is in communicating this information to the very last mile. Here, private players should step in, as some already have, and IMD is happy to support them. But the repetition of the same function [of forecasting] by both [public and private agencies] is not of much benefit.”

While India’s monsoon forecasting—particularly long-range forecasting—might be fraught with inaccuracies, it is as good as what is available globally. Moving closer to accuracy is a constant process of updating forecasting technology, but it also requires stepping out of the scientific ambit, and into correlated disciplines of communication and data sharing. After all, as technical as this science may be, its accuracy—or the lack thereof—directly impacts Indians, many of whom take important livelihood decisions based on this data.