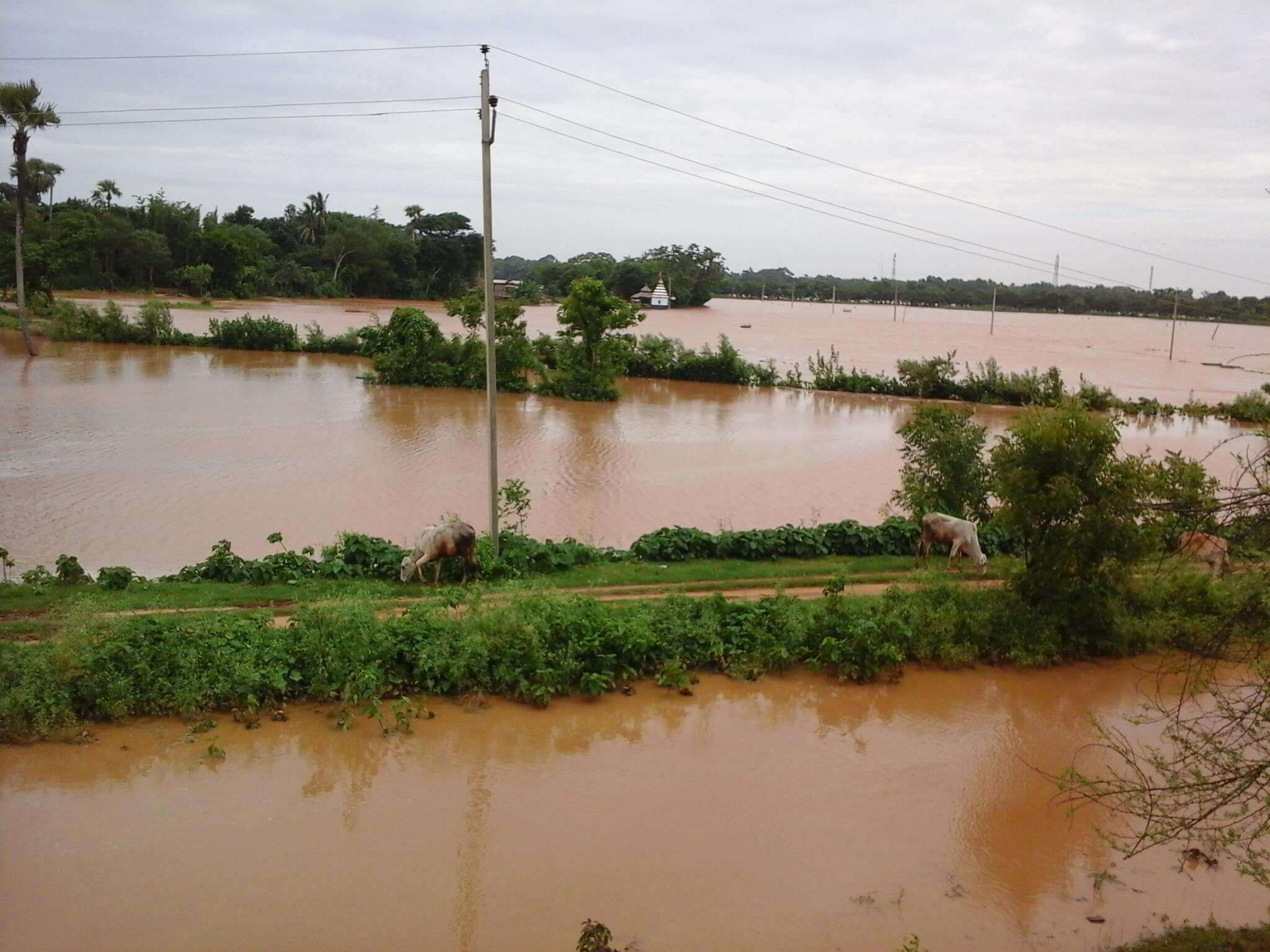 As soon the Indian Meteorological Department issued warnings of Cyclone Nivar approaching off the Southwest Bay of Bengal, state governments kicked into damage control mode. Tamil Nadu’s agricultural department issued a statement asking farmers to rush towards registering themselves for crop insurance. Simultaneously, in the districts of coastal Andhra Pradesh, paddy farmers have been asked to hurry with harvesting their fields.

The frequency of flooding and its associated damage has increased over the past two decades in eastern and northeastern India, with Cyclone Amphan’s severity a case in point. The toll of flooding and high wind-speeds is grave on vulnerable livelihoods; the Indian farmer is no stranger to this lived reality. However, reducing the socio-economic impact of floods and cyclones requires mechanisms to be identified which can build resilience amongst vulnerable communities, while simultaneously reducing the fiscal burden that such resilience places on the exchequer.

One such mechanism was established at the COP19 in 2013 in the form of the Warsaw International Mechanism (WIM). It is a comprehensive risk-management approach that accounts for climate change-related losses and damages in developing countries, including slow-onset events such as rising temperatures, land degradation, and rising sea levels. The WIM roughly classifies losses and damages into economic and non-economic losses; of note, it dubbed insurance as an effective measure against extreme climate events.

In the case of the WIM, insurance represents a risk-management mechanism that promises the “victim” of an extreme climatic event an ex-post monetary compensation — where ‘ex-post’ means they receive their claim after the disaster has taken place. In India, the main aim of crop insurance schemes has been to compensate for a farmer’s losses by covering their cost of cultivating the said crop.

However, agriculturists are affected by climatic, systemic, and economic risks, all of which differ from one another. Present crop insurance mechanisms focus only on the first — climatic risks — of the three. Albeit important, this risk transfer is insufficient for India’s farmers, who need to be resilient before a natural disaster may strike them. An “insurance plus” product may do just this.

But what is the need to move beyond traditional crop insurance policies in the first place?

The mainstream use of flood insurance in India can be traced back to 1972 with the introduction of the First Individual Approach Scheme as an experiment by the General Insurance Corporation (GIC). The Scheme was piloted at an individual level and covered only a handful of crops such as groundnut, wheat and potato. Since then, India has come a long way, culminating in what we have as the Unified Package Insurance Scheme (UPIS). Piloted in 2016, it offers multiple insurances — including crop, home, life, health, etc. — together.

Under the UPIS’ crop insurance system (which includes the Fasal Bima Yojana and R-WBCIS), 70% on compensation is offered on crops lost due to a disaster such as flooding. Simply put, this means that 30% of the total risk is borne by the farmers themselves. This is an amount that most small and marginal farmers are incapable of bearing.

While crop insurance is mandatory for farmers with seasonal and agricultural loans, data shows that the sums being insured are declining, as are the number of non-loanee farmers taking cover. This is primarily due to implementation issues such as delays in settlements, meagre compensation amounts, and problems with data entry. It has been observed that there are persistent delays in settling farmers’ claims, and that insurance companies (both public and private) largely profiteer by receiving higher premium amounts than the claims settled. This burdens the Government’s treasury.

Insurance products ought to incorporate the social realities of the village communities and farming households whose woes they intend on alleviating. These include the debt burden on a household, the decision-making dynamics within it, and the awareness and access to financial literacy required to properly reap the benefits of an insurance policy. This is far from the current case.

For example, the distribution of gender and labour is ignored when it comes to identifying beneficiaries for an insurance policy. Farmers covered under insurance schemes are generally men, even though women’s labour participation in agriculture is greater than their male counterparts. Male members of the household have access to documents, land, and the wherewithal to control their finances either through debt or migration. On the other hand, the women of the household, being primary caregivers, are required to take care of the flooded homes, farms, and children — all the while suffering disproportionately from the disasters’ effect.

Yet, despite all these shortcomings, insurance is still touted as one of the most effective non-structural tools to reduce a farmer’s risk of loss due to climatic disasters. The current milieu of insurance products cannot reduce the multifold risks that are expected to be managed in the face of natural disasters such as floods or cyclones. This is where there is a need for a mechanism that does more, and builds resilience — an “insurance plus”, of sorts. As a tool for climate change adaptation, such an insurance mechanism can address the persistent challenges plaguing current insurance products.

“Insurance plus” as a possible adaptation strategy to flood risks

Even if we consider insurance as the bedrock for risk management, the reduction of the risk to farmers requires both ex-ante measures — which are taken before the climate disaster — and ex-post measures — which are taken after it occurs. An “Insurance Plus” mechanism fits the bill; it is a package of services and products that focus on building resilience rather than focusing solely on compensation mechanisms or risk management. These products are not just limited to insurance policies themselves.

For example, ex-ante measures under insurance plus policies could include the incorporation of technology into risk assessments, by providing agriculture advisories and enabling access to Early Warning Systems (EWS) to avoid crop damage and losses. Development interventions like skilling and livelihood diversification are key to building the resilience of a farm-dependent household as well.

In terms of ex-post measures, the emphasis has to be laid on correcting the already-existing lacuna of delivering timely and sufficient compensation to farmers who have suffered damages. This can be achieved through the coordinated efforts of private and public actors, such as private insurance companies and the State and National Disaster Management Agencies. In addition, measures must also be made to forge and strengthen the agricultural value chains ensuring better pricing of agricultural inputs as well as production.

The physical, social and human capital losses can be effectively reduced by utilising an “insurance plus” mechanism as a tool to enhance community resilience, flood preparedness and efficient responses. In the short run, insurance would reduce the default risks for farmers and thereby increase their creditworthiness. With this environment, the farmers will be able to invest in productive assets, which may become more adaptive to climate risks. In the long run, the reduced risk profiles would reduce the burden of compensations and disaster relief from the Government as well as from insurance agencies.

However, to make such a tool holistic, it must consider the gendered impacts of natural calamities, regardless of whether it is ex-post or ex-ante. The labour participation of women, their access to documents and finances, as well as their stake in a household’s decision-making are non-negotiable realities that have associated risks. Thus, skilling and gender mainstreaming of “insurance plus” services and products is an important factor that needs to be considered.

One can draw parallels on the scalability of such initiatives from the R4 Rural Resilience Initiative (R4). It is a risk-management initiative piloted in Ethiopia by the World Food Programme and Oxfam America in 2011. It encompasses four tools: risk reduction (through asset creation); risk transfer (insurance); prudent risk-taking (livelihoods diversification and microcredit); and risk reserves (savings).

The R4 approach helped communities become more climate-resilient by building their own skill-based capacities while also providing access to insurance. It resulted in farmers saving more, investing in productive assets, and maintaining food security, all of which reduced their exposure to climate risks such as the loss of livelihood and property. As of 2019, R4 has benefited 87,000 farming households (about 450,000 people) in Ethiopia, Kenya, Malawi, Senegal, Zambia, and Zimbabwe and has distributed USD 2.4 million in insurance payouts since its inception.

Maharashtra government will ask the Centre to provide some compensation to farmers who have suffered crop damage and lost their source of livelihood due to heavy rains and subsequent floods in parts of the state: Relief and Rehabilitation Minister Vijay Wadettiwar

The logic of using private capital to enhance resilience is also compatible with CSR rules that focus on helping local communities. The investment of private capital could induce the uptake of innovative technological and agricultural practices which will build farmer resilience in the long run.

Skilling and livelihood-diversification interventions could also reduce the debt burdens on village communities, enabling them to take up more profitable agricultural investments and focus on crafting secure futures for themselves. This may also make it possible for households to spend on education and healthcare, leading to an increase in the economic status of the communities, all of which goes a long way in enhancing their disaster resilience.

Given the shortcomings of the current roster of insurance products on the shelves, and the increasing rate of natural disasters, a combination of private capital in insurance and a holistic consideration of the risks associated with agriculture could be the impetus that adaptation finance has been looking for.