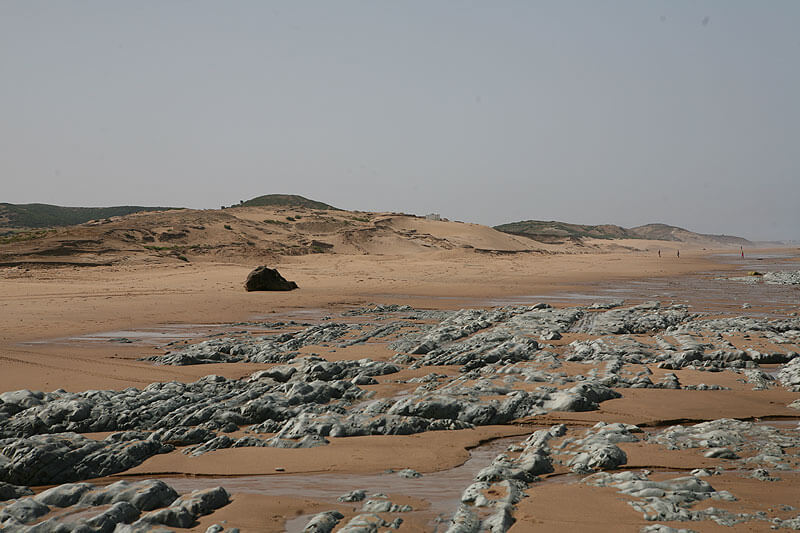 India uses an estimated 450 million cubic meters of concrete annually. On average, one tonne of concrete is used per Indian; this demand is only rising. As covered in Part I of this series, sand ─ a crucial ingredient in the production of concrete ─ is being mined to an unsustainable level to match this demand. A large portion of sand mining is done illegally; although the government has in the recent past clamped down hard on such illegal mining, there are some pressing structural solutions that need to be addressed.

At the most fundamental level, the Ministry of Mines prefers to use a narrow definition of the overall concept of illegal mining; ‘mining on land [which] a mine operator has no legal right to exploit and failure to pay required tax and royalty on extracted minerals’. Other illegal acts are dismissed by the Ministry as ‘violations’ or ‘irregularities’.

For instance, the extraction of minerals in more than permissible amounts would constitute a violation, but it will not count as illegal mining in itself. In 2011, Karnataka’s state Lokayukta (anti-corruption ombudsman) used the following definition: any illegal action by a mining company (not adhering to the methods of mining, agreed upon amounts, violations in transportation, etc.) during the course of the mining period would amount to illegal mining. Using the latter as a standardized definition for the concept of illegal mining will build the necessary foundation to comprehensively battle against it.

Next, India needs to fix the broken system by which Environmental Impact Assessments (EIAs) are conducted. An EIA is a study which attempts to estimate the impact of a proposed activity on its surrounding environment. Ideally, this estimation process is supposed to be a rigorous one; unfortunately, it has rarely ever been so. Speaking at the Green Landscape Summit in 2011, Jairam Ramesh described the poor implementation of EIAs, saying that “The EIA in its current form is a bit of a joke”.

EIAs are submitted to the Ministry of Environment. They are usually the only available source of empirical data available to regulators who assess the validity of a project. On closer inspection, the massive flaws in the nature of these EIA reports become clear.

Companies are required to hire consultants to produce these reports; there is no independent institution or third party that performs these assessments. Since the companies pay the consultants, the latter are more often than not obliged to do what the companies ask of them.

In this case, even though the government reduces the burden on itself by not performing EIAs, it creates a massive conflict of interest. Therefore, the authority performing the EIAs must change; there must be an independent institution or a third party to assess the validity of potentially damaging projects.

After reaching the Ministry of Environment, EIAs are forwarded to Environmental Appraisal Committees (constituted of experts for the respective sectors such as mining, industrial, thermal power, etc.) for further scrutiny and assessment. It is usually based on these committees’ recommendations that projects are approved or denied. Further, they have the authority to conduct site visits to verify the authenticity of the EIAs. However, Committees hardly ever make these site visits due to a lack of time and resources.

Therefore, little is ever done to confirm the EIAs, which is sadly a well-known fact. This is where an increase in the mapping and surveillance of mining sites will play a big role. Government vigilance creates a basic understanding of an area and how a project will affect it. Based on this, there can be some reference for regulators to approve or dismiss a particular project on environmental grounds.

The third problem is one of monitoring, an area wherein the government has faced a lot of trouble. Here, an increase in mapping and surveillance of EIAs kills two birds with one stone. This method has already seen some success; it was used in Tamil Nadu to uncover 29 sites of extensive illegal sand mining. The Ministry of Mines collaborated with several other parties to create the Mining Surveillance System (MSS), which is a satellite-based monitoring system which aims to “establish a regime of responsive mineral administration, through public participation, by facilitating State Governments in curbing instances of illegal mining”.

In a Rajya Sabha session, Mr Piyush Goyal (Minister of Mines, Power, Coal and New & Renewable Energy) said, “The wider use of Satellite Remote Sensing Technology will offer quick, transparent and periodic monitoring of mining leases including easy access to remote areas.” He also said that the MSS includes a user-friendly mobile app “for the use of mining officials, who will receive alerts, do field verification and submit inspection reports. This mobile app also aims to establish a participative monitoring system where the citizens also can use this app and report unusual mining activity which will be generated as a trigger”.

Ideally, this system should be spread primarily to those states which experience the most illegal sand mining and eventually throughout the country. Another method of efficient monitoring would be the use of drones; they can be used for exploration, mapping, fixing land boundaries and tracking vehicle movements. In areas where mining has been declared illegal, drones can make regular fly-by checks to ensure that the law is upheld.

Numbers from the Environmental Impact Assessment Resource and Response Centre (ERC) show that from 2006 to 2008, the ministry approved 587 new mining projects (including sand mining), and rejected only 10! This trend is evident across other sectors as well; A Human Rights Watch report found that out of 2,515 mining, power, industrial and construction projects, only 20 were rejected. The almost blind approval (especially when one takes into account inefficiencies with EIAs) given to these projects has fostered and nurtured a booming illegal market in these areas. This holds special relevance in the case of sand mining.

Alternatives to sand can prove to be a great asset in this battle. Studies from all over the world show that societies have been sitting idly on these substitutes for a long time. Some substitutes are:

With the increasing impetus for research, this list goes on to include options such as foundry sand, mixtures of copper slag and ferrous slag, bottom ash and more. While Indian standards have expanded in order to allow alternate options to be used, few parties, if any, have actually developed or used these. Using alternative options for sand and concrete will undoubtedly reduce the demand for sand and promote building environmentally sustainable societies to meet rapid urbanization.

The next solution is a complicated one. As Part I of this series had mentioned, illegal sand mining is a dangerously deep-rooted nexus comprising of government officials, politicians, corporates and the local populace. Local miners, who are usually aware of the illegality of their actions, find better pay in this line of work. This facet of the sand mining problem requires localized solutions which aim to de-incentivize this collusion while providing other opportunities that pay as much. This, coupled with active community awareness programmes is a sound recipe for a grass-roots solution to stem illegal sand mining.

The last identifiable structural problem is, unsurprisingly, the massive presence of corruption which allows such activities to exist and grow. At the lowest levels, local sand miners pay off inspectors at checkpoints; at an institutional level, industry officials claim it is impossible to get basic clearances without bribery. Corruption has only been heightening, owing to increases in the prices of sand which have increased the potential spoils as well. There is no easy answer to the battle against corruption; despite anti-corruption crackdowns and the presence of structures to fight corruption (like Lokayuktas), illegal mining still persists amidst governance structures which seem to have made their peace with it.

The fight against illegal sand mining and ‘the sand mafia’ starts with a fundamental revision of the government’s understanding of illegal mining. Thereon, the aforementioned solutions must be acted upon hand-in-hand. In dealing with corruption, we can only try and tighten the noose around its participants by encouraging community members to disclose information on corrupt officials while severely reprimanding those guilty of the charges. India is at a crossroad amidst rapid urbanization which must be met with environmentally sustainable ways. Relentless sand mining has already severely affected water bodies, the surrounding environment, agriculture and more. The battle against India’s illegal sand mining must be braver, bolder and must pick up pace now, more than ever.

This article is the second in a two-part feature on sand mining. Featured image from Coastal Care.