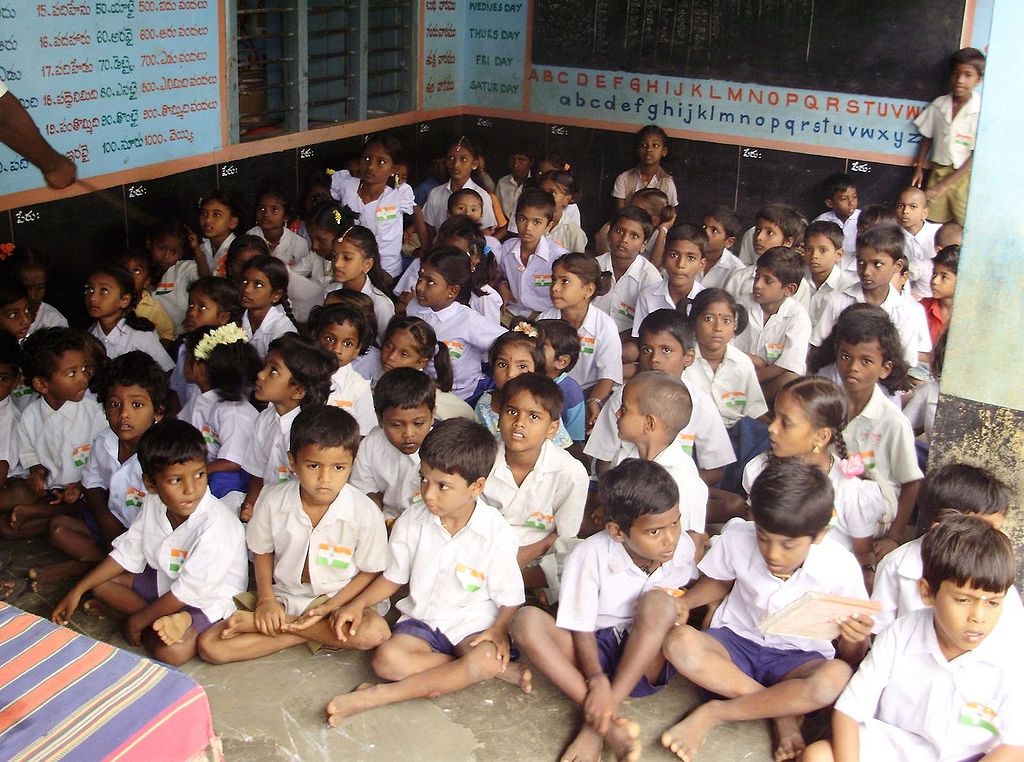 The idea of school consolidations are fairly simple in theory; for a particular region, in schools where there are too few students, pool them together into either one big school or a ‘cluster’ of schools. The argument here is that resource allocation towards these newly consolidated schools can improve, thereby improving the quality of education.

Part one of this two-part series studied the context, background and factors that led to school consolidation finding its way into the public education system. And make its way, it did. Rajasthan was the first state to take up school consolidation and was soon followed by other states like Gujarat, Bihar, Andhra Pradesh, Telangana and Odisha. However, this move was also reversed in some locations, after immense criticism about its efficacy.

Read Part One Here: In Search of a Vaccine for Public Education: What’s With Consolidating School?

Were there any positives?

Different states recorded different experiences in terms of ease of operations and allocation of resources.

For instance, in Rajasthan, the teacher-grade ratio (TGR) — the number of teachers for each grade — was low before consolidations, at about 3 teachers for 5 grades. This meant that one teacher was not only teaching multiple subjects, but multiple subjects across different grades. Mridusmita Bordoloi and Ritwik Shukla of the Centre for Policy Research found that after consolidation, secondary schools had more teachers for every grade. Elementary schools also saw an improvement, albeit not as much as secondary schools.

On other aspects of the RTE, such as the infrastructural requirements — playgrounds, electricity or boundary walls — consolidated schools did much better. 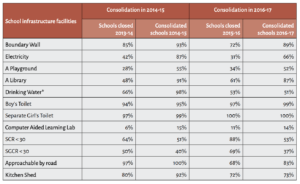 So on the count that governments could provide better quality of education if the number of schools were reduced, the experience of Rajasthan does seem to be positive. But as we dive deeper into these numbers, huge issues come to the fore.

It’s important to remember that the fundamental issue that the Sarva Shiksha Abhiyaan (SSA) and the Right to Education Act, 2009 (RTE) tried to solve was the lack of access to schools. While advocates for school consolidation argued that there were simply too many inefficient schools, sometimes too close to each other as well, others argued that consolidation made schools virtually out of reach for numerous citizens. This was especially the case for students from socially and economically vulnerable communities like SC and ST communities.

“The conversations with the community and parents revealed that the distance between the habitation and the newly merged school in rural habitations is significant for children in the primary age group and parents are apprehensive of the risks involved in sending small children to schools located far away. For example, these habitations are surrounded by hills, canals, ponds, isolated stretches of farmland and so on. Therefore in the aftermath of closure, while economically better off parents move to private schools, the poor parents are left with limited schooling options. It is a choice between a government school located at a distance of more than 2 KMs or a private fee charging school that can put additional burden on poor families”

The enrolment of children with disabilities also dropped considerably. Mridusmita Bordoloi and Ritwik Shukla’s study of Rajasthan reflected this too:

The closure of schools also has a huge impact on another vulnerable group — girls. As has been documented time and time again, girls bear the brunt of reduced educational opportunities. From parents being unsure and uncomfortable with allowing girls to travel too far to school, to child marriages, girl children are especially vulnerable if schools close by are closed.

The impact of the lack of access is only accentuated by implementation issues. For one, there were several questions about the basis of closing schools itself. The Save the Children study notes:

“In Telangana, for example, some officials and activists were of the opinion that teachers may sometimes fudge the enrolment data keeping his/her own interest in mind to get a school closed and move to a school of his/her own choice”

This is interesting because the basis of identifying schools is the DISE data. And who provides data about the schools? The teachers. And given the sheer number of schools, it is also unclear whether government representatives actually verify this input data.

In a lot of instances, it was also found that several schools were closed under the policy without the prior consultation or assessment of the community’s needs. Parents were especially kept in the dark. The Save the Children study pointed out that there was little effort on the part of either government representation or the teachers to help parents through the consolidation process. They note, “it was left to the parents to find the nearest school for their child.”

“During our interactions with parents across Maharashtra, they say that if there were buses running from the schools to the villages; atleast this way there is some accountability for the safety of the children”, says Siddesh Sarma, co-founder of Leadership for Equity. But this request never came to fruition.

Admittedly, the problem is far more complex; while at the outset, it seems like a simple quality versus quantity argument, there are several other factors that must be taken into account.

To the extent that more teachers are available, consolidation can set the stage for improvements in learning. But the fact that school consolidation reduces access is also a bitter reality. “When it comes to an essential service that has to be provided, to your citizens, then you have to ensure that instead of focusing on what is convenient to administer, you focus on what is convenient for your people to access”, says Siddesh. “Just because it is ‘easier’ for governments to build and manage a big school, doesn’t mean that the service should be provided that way. In the case of education, you have to ensure that every citizen receives excellent education in an equitable manner.”

Either way, it is too soon to say that consolidation improves teaching and learning practices. Implementing the policy in a rash manner, without the cooperation of the citizens at the centre of it (as has been observed across different states), will ensure that this policy stays in political limbo for some time to come.