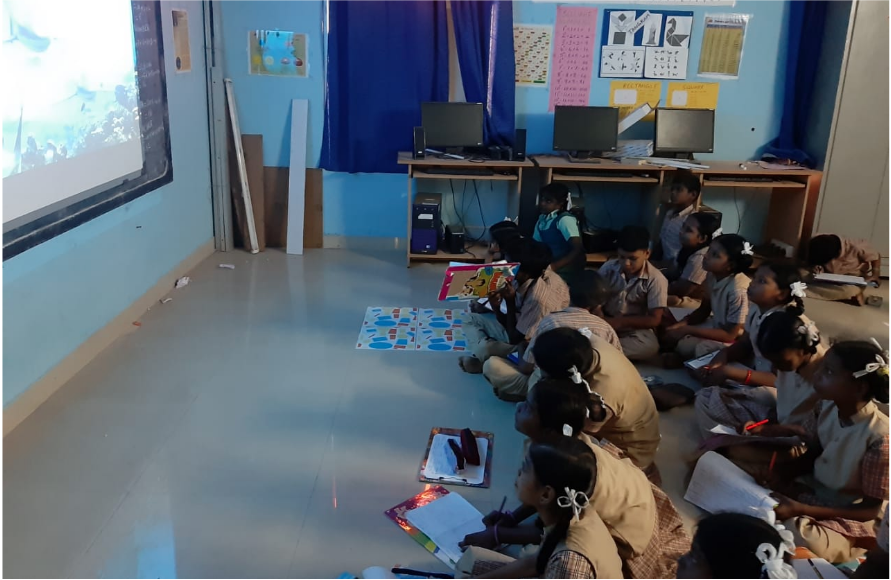 It’s a blistering afternoon in Tamil Nadu, in July 2019. Inside a school in central Chennai, students run amok-the heat is not helping their razor-thin attention spans. Amidst the chaos, however, one classroom stands out. Thirty Grade 2 students are intently watching a screen as it plays an English song with an upbeat melody. Occasionally, the teacher pauses the video and asks a student the meaning of a particular word in Tamil. Upon answering the question, the video is resumed. Inside this classroom, attention is rapt.

On September 5, 2017, the Ministry of Human Resource and Development (MHRD) launched a digital education portal to connect teachers across the country. Digital Infrastructure for Knowledge Sharing, or DIKSHA for short, was formed to “enable, accelerate and amplify solutions in the realm of teacher education”. Teachers can create, upload, and view digital content relevant to their syllabus, and use it to enhance student learning (and attention) inside the classroom.

DIKSHA is one of the MHRD’s most ambitious projects. It has lofty goals to match its mission: to connect teachers across India, and to enable teachers to create, share, and verify educational content. It also provides teachers with training modules, serving as a one-stop-shop for all teacher-related services. Although the platform was initially geared towards teachers, access to DIKSHA is not limited to them; any Indian citizen with an email address can view the platform’s content. DIKSHA has the potential to close India’s educational achievement gap, and it attempts to do so using nothing more than a smartphone.

DIKSHA first launched in five states across India, including Maharashtra, Andhra Pradesh, Gujarat, and Tamil Nadu. EkStep, the non-profit headed by Infosys co-founder Nandan Nilekani, initially offered to host DIKSHA on their open-source platform Sunbird. All five participating states were requested to upload content relevant to their respective curricula, while EkStep brought content vendors like Khan Academy and the Azim Premji Foundation on board to assist each State with content curation.

Tamil Nadu, however, decided to go one step further: instead of using someone else’s content, they decided to create their own. From videos narrating “A Tragic Story” by William Makepeace Thackeray for the state’s English syllabus, to ones explaining how to calculate area for its mathematics component, Tamil Nadu has covered it all.

In June of 2018, Tamil Nadu rolled out another DIKSHA upgrade by embedding QR codes in textbooks for Grades 1, 6, and 9. Each QR code was linked to a DIKSHA-hosted content module–an animation, video or a quiz–to help students learn specific concepts. These QR code-enabled textbooks, called Energised Textbooks or ETBs, have allowed students in each of the 45,000+ government schools across the state to access digital content, as long as they have access to basic internet and a smartphone.

Within ten days of launching ETBs, DIKSHA recorded nearly 3.8 lakh unique users who accessed digital content hosted on its platform. In June 2019, the state rolled out ETBs for the remaining grades in both Tamil and English. As of today, the Tamil Nadu DIKSHA department claims to have released 313 ETBs, 9,064 QR codes embedded across these ETBs, and 10,948 unique digital resources.

In 2019 alone, the platform has recorded 2.86 crore QR Code scans and 2.79 crore content plays (which does not necessarily mean full viewing of a video) across all 32 districts in Tamil Nadu. These numbers paint a picture of DIKSHA as a well-rounded success for the government, but there is more to this story.

According to the survey results, only 40% of secondary school students reported that they had heard of DIKSHA, and just under 35% of them stated that they used DIKSHA to scan QR codes in their textbooks.

Even in an urban environment like Chennai, awareness of and access to DIKSHA amongst students appears to be quite low, which begs the question: how are there so many downloads of QR code content, if the survey results indicate that so few students are using it?

One possibility could be that Tamil Nadu’s rural constituents are bigger consumers of DIKSHA’s digital content than its urban populace. According to a current employee at the Tamil Nadu Sarva Shiksha Abhiyan, although DIKSHA training was provided to nearly every teacher stakeholder in the process–from district heads to subject teachers– the training has been general across districts. If this is true, then why aren’t we observing targeted, DIKSHA-specific teacher training programs for both urban and rural districts? Perhaps this is so because this information is not something that the Tamil Nadu State Department of Education is privy to.

A large part of DIKSHA’s potential lies in the data that it can provide each state, for example, districts with the highest content consumption, dates and times when content is viewed the most, amongst other indicators. Having access to this data could open up new vistas for the government. For instance, new content could be promoted on the platform during peak user engagement times, to ensure that all users–teachers and students alike–receive relevant information at times when they are most likely to see it.

You May Also Like: Data Data Everywhere, Whose is it to Give?

Nevertheless, since DIKSHA is not hosted on its own platform, it is possible that EkStep (the company upon whose platform DIKSHA is built) controls access to that information, which might result in State governments receiving insufficient information about their constituent districts. Lack of access to critical information about state consumption could severely cripple the state’s ability to design appropriate measures for educational intervention. Without the full picture of the problem, creating adequate educational interventions becomes a challenge.

In recent developments, it appears that an updated version of the portal–DIKSHA 2.0–is in the pipeline, with aims to create and share augmented-reality and 3D academic content. DIKSHA 1.0 has its concerns, but it has managed to achieve a portion of its grand goals with some degree of success. With more State control, technological updates and targeted training programs to improve access and awareness, it may be possible for the MHRD to realize its grand vision. Perhaps then, a classroom with rapt attention won’t be a rarity.

Aparna Ramanujam is currently a Teach For India Fellow in Chennai, who is passionate about bridging the gap between science and education policy.