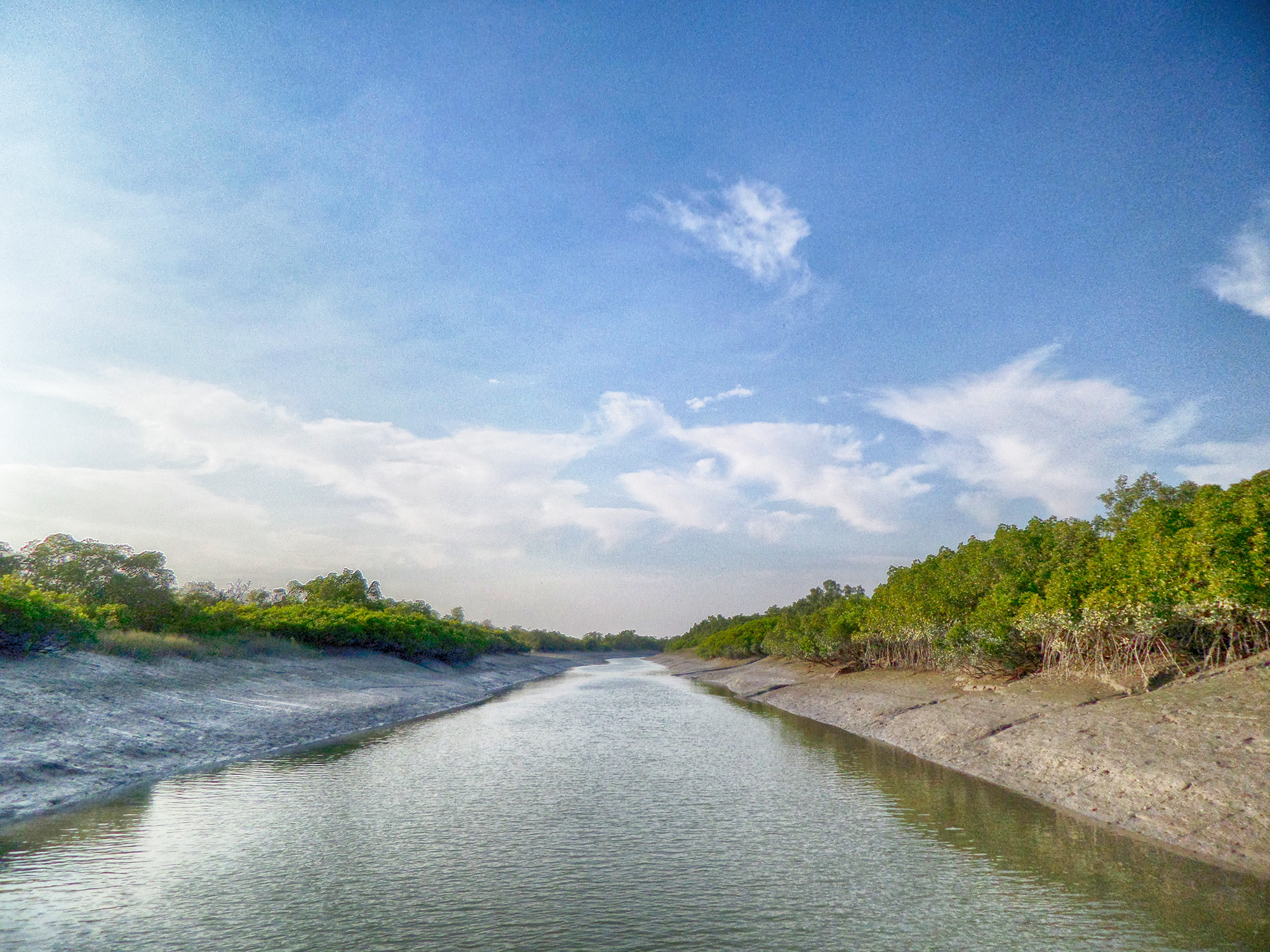 It was the 1790s. Tillman Henkel, a magistrate appointed by the newly-arrived British, was a busy man. He had the task of developing an administrative block in the Sundarbans, in today’s West Bengal. Henkel was supervising the processes of clearing mangrove forests and transporting soil to ‘create’ land.

Henkel’s work came after the East India Company’s survey which identified the boundaries of the 1.7 million acres of this ever-changing delta region of the Ganga-Brahmaputra and Meghna river systems. The Sundarbans were, and still remain the world’s largest mangrove ecosystem.

The vision in Henkel and the British administration’s eyes was simple: to make these mostly uninhabited lands a centre for paddy cultivation. And so, they continued to reclaim land in the Sundarbans, a process that carried on all the way into the 1870s. To make agriculture profitable in this delta that is frequented by saline waters, the British had a solution—they built embankments that would keep the saline water of the Sundarbans from inundating the agricultural land. These embankments made freshwater agro-ecosystems possible here, which then help sustained human settlements in the process. So extensive was the land and forest clearing process here, that by 1947, the forests in the Sundarbans were only 50% of their pre-colonial size.

Jump to 2020. 4.5 million people reside in the Sundarbans. The embankment network now extends to about 3,122 kilometres. The block which Henkel supervised is now called Hingalganj—derived from Henkel’s name. It falls under the North 24 Parganas district of West Bengal, one of the districts worst affected by cyclone Amphan, that made landfall on the 20th May. The state has reportedly incurred a financial loss of ₹1 lakh crore, which also includes the breaching of the river embankments in the South and North 24 Parganas. Several houses were inundated with water as a result.

These cyclones are not new, and neither are the damages to embankments. Cyclone Aila, which hit the state in May 2009, damaged over 700 kilometres of embankments. For several years post the cyclone, farmers could not cultivate their crops as usual.

As multiple climate scientists have warned, with the warming global climate, cyclones will be frequent visitors in this region. This then means that embankments would breach, agriculture would suffer, and the government would incur huge expenditures to repair and reconstruct them.

In this context, can livelihoods in the Sundarbans be more resilient? At the very outset, resilience will have to be built by acknowledging the unique geography of the region, which the embankments, relics of a colonial policy, fail to do.

Due to the pandemic & followed lockdown, many returned to Sunderbans. But it was to another crisis, Cyclone Amphan has devastated the region. With destruction of embankments, a surge in the movement of saltwater from sea to land is feared.#AmphanAftermathhttps://t.co/uM8ZP5KCLk

“The British just picked up societies in rural Bengal and transposed them to the Sunderbans, but, the geography is not conducive for that kind of living,” says Anamitra Danda, a senior Visiting Fellow with ORF who has worked extensively on the Sundarbans. “Instead, they should have only allowed movement according to the movement of Nature in the Sunderbans itself.”

In the Sundarbans, Nature does inevitably move you around. Every few hours, “the forest cover swells and shrivels with the ebbs and flows of tides that shift twice a day,” writes Megnaa Mehtta, an environmental anthropologist and postdoctoral fellow at the Sheffield Institute for International Development, in Monsoon[+Other] Waters. “The forest is a river.”

“In such a shifting landscape,” Megnaa suggests, “life and livelihoods might also have been nomadic. Fixity was a colonial project necessary for taxes and tolls.”

So, the unique ecology here originally only allowed for a specific type of paddy farming called the broadcasting method. Farmers from further north of the delta used to sail here, sow the paddy seeds, and return to their native places, only to come back during the harvest period.

Even today, the geography of the Sundarbans only allows 54 of its 102 islands to be inhabited by people. The rest are homes of the Royal Bengal Tiger.

In fact, sources during the colonial period give evidence to an ecosystem without concrete embankments. While it is unclear if other types of embankments existed, it is well established that no fixed, permanent embankments existed in the delta before the British. Colonial records instead describe the Sundarbans as extremely fertile, with a flourishing rice crop. Rainey (1891: 271), as Megnaa writes, talks about buffalo and wild boar as the main threats to ripening rice, not saltwater. Concrete embankments were never a part of his description of the local geography, raising questions on their construction in the first place.

When the British administration began attempting to tame this unique and fast-changing geography with concrete, they faced devastating results. In the 19th century, an attempt was made to construct a large port—Pot Canning—despite many warnings against it from Henry Piddington, the foremost expert on cyclones at the time. But, the Matla river surged and ruined its construction, much like the fate the embankments met post the cyclones.

It seems that a life without concrete embankments existed, wherein agriculture wasn’t conditional on them. As the British constructed embankments to secure as much revenue from the paddy production process as possible, the objective to continue building these very expensive concrete structures also points to something familiar: self-interested profit.

Who benefits from Embankments?

In response to the 2009 cyclone, the Aila Task Force proposed a colossal ₹5,032 crore  ‘Embankments Reconstruction Project’ to repair over 700km of damaged and breached embankments. Critiques of this project soon rolled in. It was argued that this embankment reconstruction was based on an expensive, but previously untested technology. That this concretisation would impact the habitats of local flora and fauna was also brought to notice, apart from the flouting of environmental norms that covering the riverside slope with polypropylene sheets would incur.

This is a photo I took in 2017 when the concrete embankments post #CycloneAila had just been constructed. The #Embankment Reconstruction Project was allocated a whopping Rs 5,032 crore/ GBP 562 million funded by @WorldBank to build cement and block walls @sayantanbera pic.twitter.com/aGk9flYBjh

Amites Mukopadhyay’s book, Living with Disasters brings out another critique. It documents the voices of locals in the Sundarbans who lost their lands when rings of embankments were built on their land. They were not given any compensation.

In this context,  it is important to note the socio-economic architecture of each of the islands in the Sundarbans. Those who live closer to the edge of the rivers, and thereby closer to the embankments, are often those who belong to the lowest caste groups. As one goes inwards and away from the rivers, economically better-off people, with higher and bigger landholdings live. A breach in embankments impacts the already vulnerable and marginalised even more. So, again, who benefits from these embankments?

Reports have suggested that for every kilometre of an embankment built in the Sundarbans, the contractor receives ₹5-18 crores, massive amounts of which are shared with local village officials too.

So, these embankments only seem to be a part of a large viciously expensive cycle of construction, destruction by cyclones, and reconstruction. In between this, it’s the agriculture that suffers. Making livelihoods resilient here, then, would require a reimagining of the overall ecology of the Sundarbans.

“There is no doubt that for many who live near them, the embankments are what makes their lives possible,” says Anamitra Danda. “But this is because looking at their immediate past, they think that paddy cultivation in the region with embankments is the normal thing to do. In this geography, it is the most abnormal thing to do!”

A “normal” thing to do perhaps, would be to shift back to salt-tolerant varieties of rice. Historically, salt-tolerant paddy varieties like Talmugur, Lal Getu, and Malta were cultivated on raised sections of lands in the Sundarbans. But more recently, the National Bureau of Plant Genetic Resources noted the availability of only two of the six locally recalled salt-tolerant paddy varieties. Others had disappeared with the onslaught of the Green Revolution which introduced high-yielding varieties of rice. A paper by Bheema et al. reinforces the low-yielding nature of such salt-tolerant crops, leading to their gradual dip in popularity. “High salt deposition in soils makes plants increasingly difficult to acquire water and nutrients (..) High salt reduces pollen viability of the flowering stage, which in turn determines grain yield,” it states. The creation of embankments also furthered this shift; with freshwater now available, there seemed to be no need to cultivate salt-resistant varieties at all.

Since Aila, WWF-India has been re-introducing the salt-tolerant Hamilton and Malta varieties of paddy in the Sundarbans. The NGO Society of Environment and Development has also been attempting the same. Now, the preliminary assessment of Amphan has estimated that over four lakh farmers were affected by the cyclone in the South and North Parganas alone. In response, Chief Minister Mamta Banerjee informed that a new paddy variant that can grow in saltwater has been developed. But, such announcements need to move beyond short-term relief measures. In fact, higher-yielding varieties of salt-tolerant crops which can now withstand saline water that is about half as saline as seawater, without affecting normal growth are also available.  Such a move back to salt-tolerant rice would not need fresh water— and hence, embankments—at all.

Another way to ensure resilient livelihoods here can be a move from agriculture towards sustainable fishing. Interestingly, the initial shift to paddy cultivation during colonial times was an opportunity for those who engaged in fishing to climb up the social ladder, as agriculture was considered a “higher” status occupation compared to fishing. But now, a shift to fishing might actually be more resilient for the future.

You May Also Like: The Shore Scene: PM-MSY’s Fisheries Development Promises Anything But Sabka Vikas

In the Sundarbans, towards Bangladesh’s side of the mangroves, such efforts towards generating income through alternative activities have already begun under a collaboration between GIZ and the Bangladesh government. So far, more than 3,000 small-scale farmers have been trained to produce certified organic shrimps. “If people are engaged in fishing, and their land gets inundated, it would no longer matter,” says Anamitra Danda. The breaching of embankments would no longer ruin a livelihood. In fact, for fisheries, reconstruction would also not be necessary.

The natural, ever-changing ecology of the Sundarbans needs to be acknowledged in such a reimagination. Not only would that reduce the economic pressure on the government, but also ensure more resilient livelihoods for those who live here, and whose future is marked by the storms of climatic changes.

The Making of Increasing Tiger Attacks in the Sundarbans: Common Forest Dependencies, No Compensation, A Changing Ecology