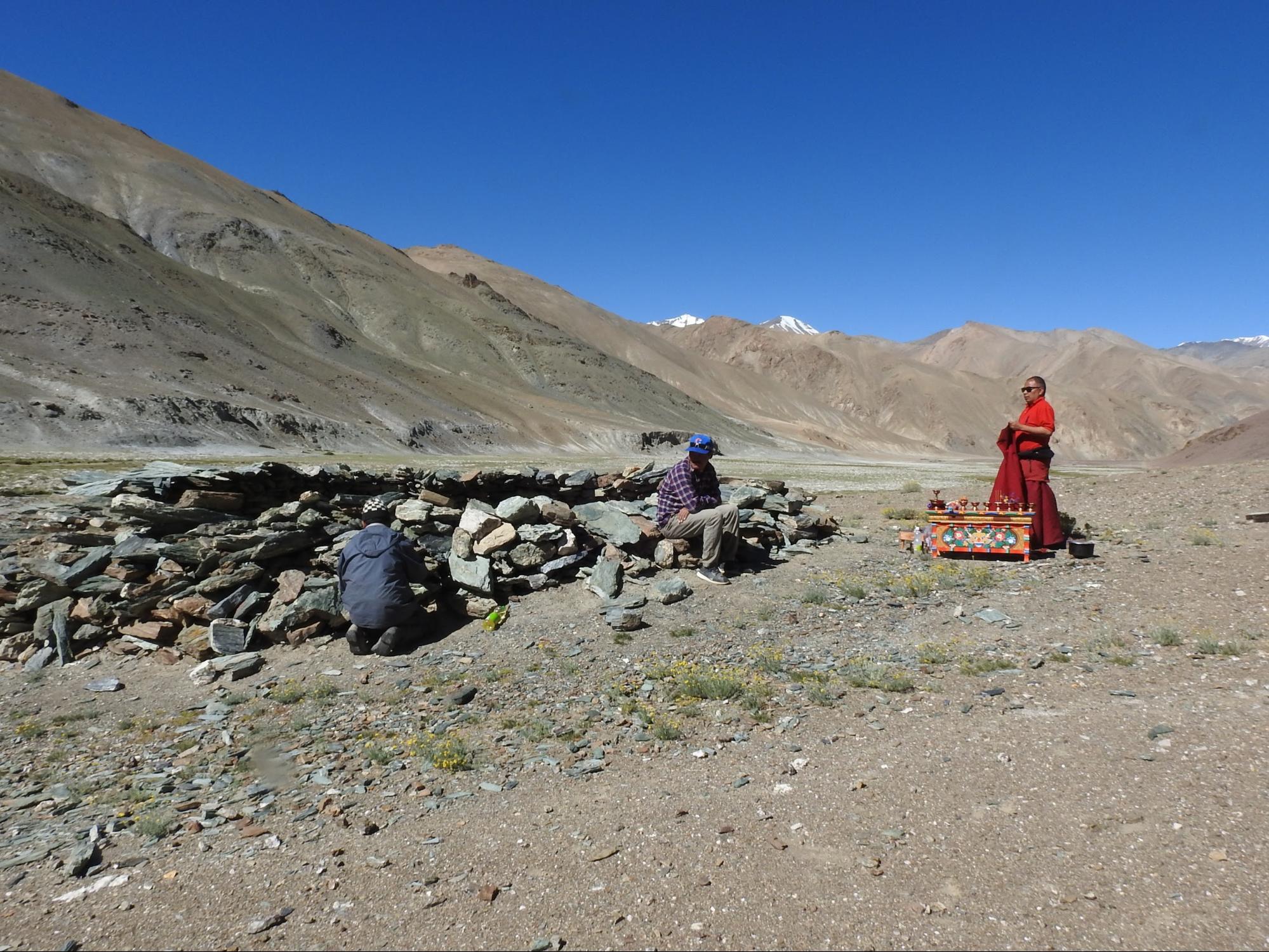 It was the late 1980s. Karma Sonam was riding horseback with his father in Ladakh’s Gya. They were to collect manure from the Dogpas, the semi-nomadic pastoralists herding their pashmina (or cashmere) goats. Suddenly, Karma’s father pointed towards an inverted conical structure made of stones, built a few metres below the ground. Locally called a Shangdong, this was a human-made wolf trap. On that day, Karma’s father heard a commotion within it—a Himalayan Wolf had been caught.

Karma and his father demounted their horse, and rushed to the rest of the herders killing the trapped wolf with stones. A predator of pashmina goats—an easy target in Ladakh’s cold desert—the Himalayan Wolf poses a big threat to pastoralists’ livelihoods, making Shangdongs seem like necessary interventions. Pastoralists usually allure the wolf into the Shangdong with live bait; the structure of the trap is such that once the wolf enters, it cannot get out.

“We were young back then and that was the usual practice to stop the wolves. So even I helped the herders throw stones at the wolf until it died,” says Karma, almost 35 years later. Now, in place of the village Shangdong he was speaking of, a stupa—a Buddhist religious structure—stands today. This is among the six Shangdongs which have been converted into stupas in Ladakh’s Chushul and Gya villages since 2018. Initiated by the Nature Conservation Foundation (NCF), this was a community-led initiative in the interest of conserving the Himalayan Wolf, who often fell prey to the local Shangdongs.

The Importance of Himalayan Wolves

Once a common method of killing wolves to protect livestock, Shangdongs across the Union Territory have mostly been inoperational since the last decade. When Karma—who now works as a Field Manager at NCF—and his team conducted a preliminary observation from Changthang to Kargil (a distance of over 300 km), they saw almost 100 Shangdongs; but of them, about 80% are not in use anymore. “For some reason, even though Snow Leopards in the region also prey upon the livestock, people here have a more negative perception for the wolves,” says Ajay Bijoor, the Assistant Program Head at NCF.  “So, the idea behind converting Shangdongs to stupas was to see if people’s negative sentiments towards the Himalayan Wolves could be converted to slightly more positive ones.”

Such negative perceptions can be detrimental to the survival of the Himalayan Wolf. The only study on the species by Fox et al. in 1995 estimated their total population to be a thin 350. They were mostly found in India in the rugged trans-Himalayan landscapes of Himachal Pradesh, Jammu and Kashmir, and Sikkim.

However, a more recent study from 2020 has pointed towards these wolves being more unique than previously understood. It suggests that they possess a genetic adaptation to cope with the lack of oxygen at high altitudes—a trait that is not found in other wolves. This could help recognise the Himalayan Wolf as a formally different subspecies with its own scientific name, as opposed to a subspecies of the Grey Wolf, which is how they are currently classified and understood. Currently, the Wolf in India is protected under Schedule 1 of the Wildlife Protection Act, 1972, making it illegal to hunt them. However, this taxonomic recognition will bestow the Himalayan Wolf with a conservation status by the International Union for Conservation of Nature, which could help protect the vulnerable animal more.

Apart from human threats, studies also indicate the challenges faced by Himalayan Wolves in terms of the species’ hybridisation with feral dogs, as well as disease transmission from the dogs. In this light, specific conservation steps, along with repurposed Shangdongs, are necessary to protect this critical species.

But, if the Himalayan Wolf needs to be protected, the economic costs that the communities may have to suffer as a result of its attacks also need to be acknowledged. “The wolves and other predators usually attack the younger lambs which cannot be taken further up the mountains to graze, and are left behind in the lower altitudes,” explains Lundup, a former village head of Gya. “In a nearby village sometime back, a lynx killed 43 lambs in one night,” adds Karma. “That is a huge loss to the people.”

For the Dogpas and villagers then, killing the Himalayan Wolf is primarily done to protect their livelihoods. With that, after a few rounds of meetings with the NCF, they became the first group of consultants for this initiative to reimagine the Shangdong.

Creating stupas where the Shangdongs were located was not a popular idea immediately. It took about a year for the Shangdong in Gya to be neutralised; but, the Rinpoche—or the Buddhist religious head—played a very important role in bringing this about. “The idea to not harm another being, after all, aligns well with the beliefs of Buddhism [one of the major religions practiced in Ladakh],” says Bijoor. The Rinpoche also attended meetings, motivating people with religious sentiments. Then, traditional stupa makers, a skill remaining only in the hands of a few today, were brought on board. In some cases, the same stones that created the deadly Shangdong were used to create the revered monuments.

Now, in the final structures dotting the landscape here, the Shangdongs still exist. But, they are altered to ensure that if a predator does get trapped inside, it can escape. In Gya, the locals have built one stupa, and one Mane, a different kind of religious relic marked by stones engraved with Buddhist mantras. “Our village’s women’s alliance and youth groups came together to organise people to help in whichever way they could,” says Lundup. In Chushul, where the first such stupa in Ladakh was created, the Rinpoche himself arrived during the construction and gave his blessings.

However, “it will be foolish to believe that by converting the Shangdongs to stupas, the wolf attacks have ended,” says Bijoor. Attacks by wolves and predators naturally continue in the absence of the Shangdongs, albeit, no studies are currently available to measure whether this trend of human-wildlife conflict has increased or decreased. But for the local communities to lead these new conservation efforts of predators, alternatives to offset the economic damages that occur when the predators hunt their livestock are also required.

One way of addressing this is by creating predator-proof corrals, which is where the livestock are kept. Various NGOs in Ladakh, including NCF, are facilitating this transition. The proofing process involves adding an iron mesh on the otherwise roof-free stone corrals, as well as binding the stones with mortar, which then deny any entry to the predator. “All these initiatives are community-led,” explains Karma. “NCF helps in providing the raw materials, while the communities themselves build the structure.”

Another popular method has been a community-based livestock insurance scheme. Here, herders who choose to participate contribute some money to insure the animal of their choice. Upon a loss of the said animal, they can then claim their money. All the processes of managing these funds and reimbursements are conducted by a local representative. “As of now, this livestock insurance scheme is only for larger livestock, like horses,” Lundup mentions. This has been done at the behest of local communities due to their higher economic value compared to sheep.

The District Magistrate under Ladakh’s Autonomous Hill Development Council (LAHDC) has also appreciated NCF’s work in the past, indicating the need to run these programs in “close coordination with government agencies like the Wildlife Department,” to increase the impact, scope, and benefits of such conservation efforts.

In a recently released short film by Nomadic Brothers on the same initiative, Karma says that villagers have come together to stop using Shangdongs “to atone their sins of the past.” Here, religious and spiritual beliefs and wildlife protection seem to have come together to slowly change the negative perceptions surrounding Himalayan Wolves–a small piece of the larger conservation picture in Ladakh.

Featured image: a Lama at a repurposed Shangdong, courtesy of Karma Sonam.