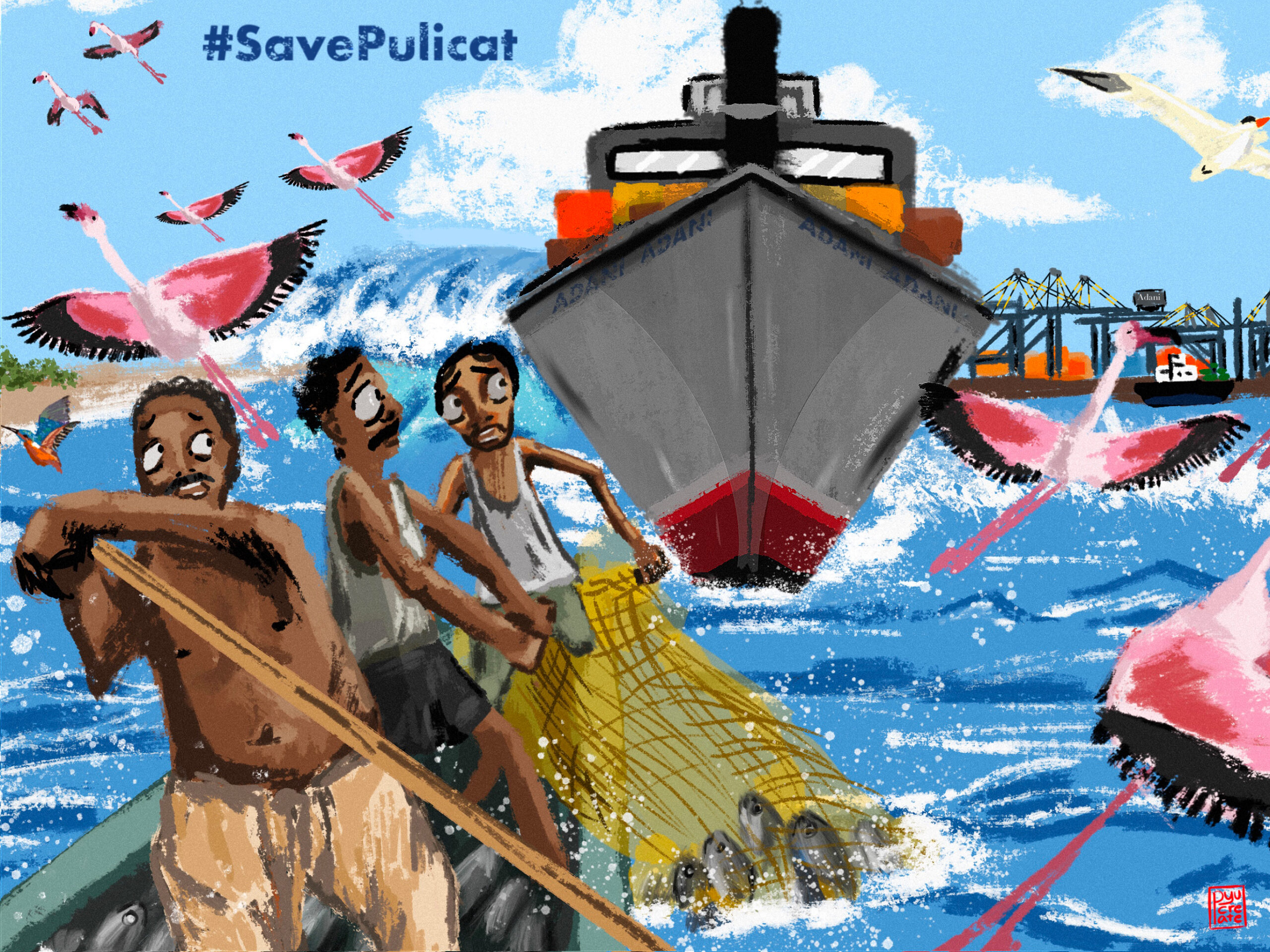 No Chennai resident can possibly forget the floods of 2015. The horrors of this natural disaster that impacted more than 30 lakh families, and caused a loss of at least ₹50,000 crore, are etched in people’s minds. Many have stressed that the disaster was more man-made than natural: haphazard construction along the three rivers that flow through the city—the Kosasthalaiyar, Cooum, and Adyar—hampered them from draining excess stormwater into the Bay of Bengal. For two of these rivers, there was an added obstruction. Sandbanks developed at their river mouths due to the coastal erosion that followed the construction of the Chennai port in 1881. With their mouths blocked, the excess water could not flow out.

In 2020, a Union Environment Ministry-appointed sub-committee made a similar observation. They stated that the wetland ecology of the Kosasthalaiyar linked the Ennore creek, Karungali estuary, and Pulicat lake together, and that this was “critical to the effective drainage of the massive volumes of flood waters received from inland.” The committee recognised that protecting this unique ecological interconnectedness was thus necessary.

This sub-committee was formed after the public made several complaints about the upcoming expansion of North Chennai’s Kattupalli Port by Adani SEZ Ltd. to 2,472.85 hectares—an expansion 17 times bigger than its initial 134 hectares. This expanded Kattupalli port, Chennai’s third major port after Chennai Port and Kamarajar Port, would sit on the ecologically crucial Pulicat-Ennore coastal wetlands. 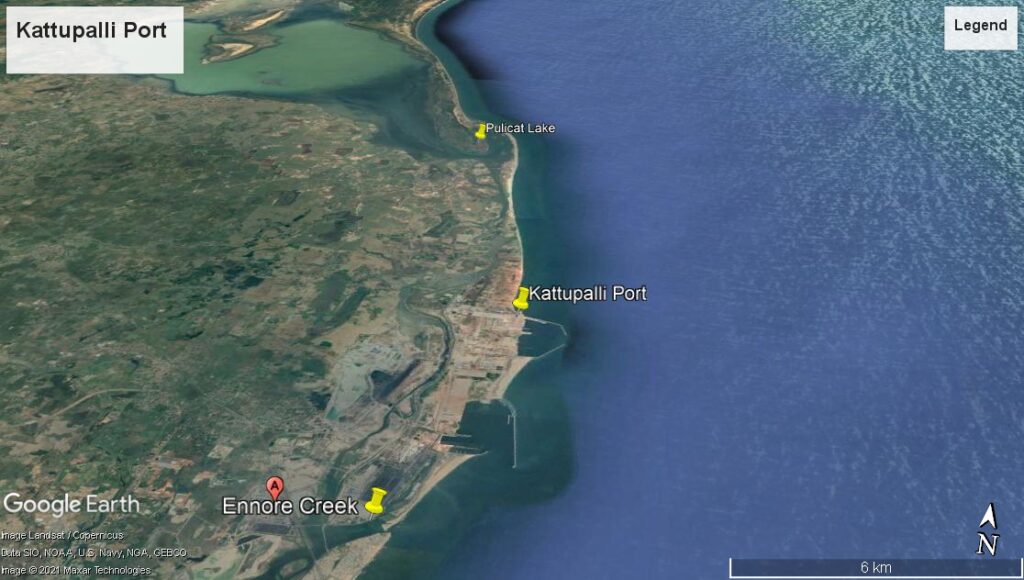 “Apart from floods, the Pulicat-Ennore coastal wetlands, which span across 8,000 acres, also act as buffers when cyclones hit the coast,” says M Yuvan Aves, a writer and naturalist. Chennai is prone to cyclones, 2020 alone witnessing two—Nivar and Burevi. “And that’s not their only function. These wetlands provide one-fourth of Chennai’s drinking water. At a time when the city is facing a water crisis, the wetlands can really protect the city.”

This ₹53,000 crore project is gearing up to obtain its Environmental Clearance from the Ministry of Environment, Forest and Climate Change; the Environmental Impact Assessment (EIA) has been prepared and the subsequent public hearing is soon to be scheduled. In response to these developments, over a hundred scientists and conservationists have written to authorities rejecting the port’s expansion for the irreversible and permanent damage that it would do, highlighting the ecological richness of this region which hosts India’s second-largest brackish water lake—Pulicat—and is dotted by mangroves, estuaries, backwaters, salt pans, and beaches.

So, why is the port being expanded?

The revised master plan of the Adani project suggests that the Tamil Nadu coast needs infrastructure “for speedy cargo evacuation for trade” since “thermal power stations… and major refineries are located in the northern suburbs of Chennai leading to huge potential for coal, crude, and other petroleum products.” Car manufacturing plants are also located in the vicinity of the port. Speaking about expanding the port and its cargo handling capacities, Karan Adani, CEO of Adani Ports and SEZ Ltd. stated that the company wanted to make Kattupalli port “one of the largest ports in southern India.”

But, an expanded port enabling ease of transport will attract more industries to set up shop or expand their bases here. This is already happening. A 2019 study found that post the 2015 floods, over 600 acres of the Ennore-Pulicat wetlands have been encroached upon by many public-sector undertakings including the NTECL Thermal Plants, Kamarajar Port, and Bharat Petroleum. With more industries as a result of an expanded Kattupalli, the pollution status of these coastal wetlands would only look grimmer.

A National Institute of Ocean Technology study further found that pollution from industries adjacent to Kamarajar Port—about 8 kilometres from the Kattupalli Port—had caused irreversible pollution in Ennore creek’s backwaters, a water body that opens into the Bay of Bengal and is lined with salt pans and mangroves. The study found that solid wastes from industries and washings of oil tankers were dumped into Ennore creek and other low-lying areas. This pollution was so toxic that the creek is “unlikely to meet water quality standards even with treatment,” the study claimed.

The air in this industrial area too is polluted. A 2017 health study conducted by Huma Hospitals in Kuruvimedu—a village tucked behind a thermal plant in Vallur, just 15 kilometres from the Kattupalli port—found that 19% of people X-rayed had shown abnormalities in their chests. 36% had dry coughs, suggesting that the cause of the cough was a physical irritant rather than a pathogen-induced infection. Residents have also complained of toxic fly-ash that settles in their homes and lungs.

The expanded port will only add to the toxic air and water, whether during its construction or once it opens operations. “With the construction alone, one major threat would be the coastal erosion that would take place here,” says Aves.

Even though it looks stationary and permanent, sand along beaches actually moves, depending upon the tidal currents of the oceans. The south-west monsoon shifts the sand—a process called longshore drifts—northwards along the coast. But, when ports and other large man-made objects come in the way, the sand starts accumulating south of the obstruction, causing accumulation there. The North of the obstruction is devoid of any such sand, which narrows the beach there. Breakwaters—which are long structures that protect the anchored boats from ocean currents—are the major obstructions to longshore drifts.

This is exactly what Chennai’s coastline is witnessing. A 2018 report by the National Centre for Coastal Research showed that 30% of the city’s coast had shrunk in a specific pattern, wherein the Northern coastline was slowly narrowing, while the one in the South—which includes the popular Marina Beach—was broadening. “Many families who were living to the north of the Chennai Port had to move out because of the coastal erosion [since the beaches near where they resided shrunk with the erosion]. Yet, they were not considered for any rehabilitation or resettlement packages since the families were not seen as directly impacted by the port’s construction,” says Pooja Kumar from the Coastal Resource Centre.

The pattern repeats along Tamil Nadu’s coastline, 40% of which has eroded between 1996 and 2016. The Kattupalli port’s expansion will witness the construction of two breakwaters over a total of 12 kilometres. With this, longshore drifts will stop at the breakwater, eroding the coasts north of it; since the port is close to the Andhra Pradesh border, it could harm the neighbouring state too.

Illegal on Paper, Disruptive to Livelihoods

The dangers of building ports on eroded coastlines have not gone unnoticed by the government. A 2009 office memorandum by the MoEFCC stated that areas “prone to high erosion above 1 metre per year…shall not be considered for locating ports and harbours.” The EIA for the project calculates that Kattupali’s project area may see erosion of up to 16 metres per year without any shoreline protection. And yet, the Kattupalli port expansion project continues to seek clearances from the MoEFCC.

This is not the only illegality that the new expansion project is marred with. The project site is a turtle nesting ground and is also located less than 50 metres away from mangroves. Under the Coastal Regulation Zone Notification, 2011, such areas are classified as Coastal Regulation Zone-I—or, as environmentally most critical areas. The notification prohibits any development activities in these zones, and also prohibits port building in high eroding areas.

Further, areas within a 10-kilometre radius of protected areas are demarcated as Eco-Sensitive Zones (ESZ), which restrict development activities. The Kattupalli Port expansion is just 2.1 kilometres from the sanctuary, as the EIA states. “The project is within the eco-sensitive zone of the Pulicat Bird Sanctuary,” says Aves. “In 2019, after the port expansion was proposed, the Tamil Nadu Government proposed a zero Eco-Sensitive Zone for this sanctuary. But it was turned down by the central ESZ expert committee. This information has been suppressed by the project proponent who is trying to bypass a wildlife clearance.” That this could impact over 200 species of birds and their habitats has thus skipped the government’s radar.

Fisher people from in and around Lake Pulicat, Tamil Nadu, rally to #StopAdani from building a megaport and industrial estate over productive fishing grounds and critical wetlands. #StopAdaniSavePulicat #SaveChennaiWetlands pic.twitter.com/1hqwvDzDfc

Behind these illegalities of paper and policies, there are real lives and livelihoods of over 30,000 people that would be impacted. Between the Kattupalli port and the brackish waters of Pulicat lake, at least 11 villages fish in shore waters proposed to be reclaimed by the port expansion. “There is a thin strip of beach that separates the Pulicat Lake from the saline water of Bay of Bengal. But with the port’s construction and the erosion that will follow, the sea will come in, impacting the brackish water and the fish present here. The livelihoods of fishers would suffer,” says Pooja.

Common lands and water bodies which the local communities have been using for grazing and fishing will also be privatised.

Owing to the number of complaints, the Expert Appraisal Committee—which advises the government on environment clearances of development projects—deferred the proposal of Katupalli’s expansion in February 2019. They said the proposal would be considered only after the project proponent submitted a point-wise reply to each issue raised in public complaints with scientific evidence. But, the EIA makes no mention of this deferral.

The next step for the project to gain approvals is to hold a public consultation. What was previously proposed to happen on 22nd January has now been postponed indefinitely to a different venue, since a large number of people are expected to gather.

In the meanwhile, concerned citizens and those directly impacted have been voicing their concerns through an email campaign, on-ground protests with “Stop Adani, Save Pulicat” protective masks, and an art campaign. Through the written word, powerful slogans, or the touch of a paintbrush, the message is loud and clear—protect the Ennore-Pulicat wetlands that continue to protect the city of Chennai and the livelihoods of its people.

Featured image by Pooja Kumar, for the Save Pulicat art campaign; courtesy of Yuvan Aves.