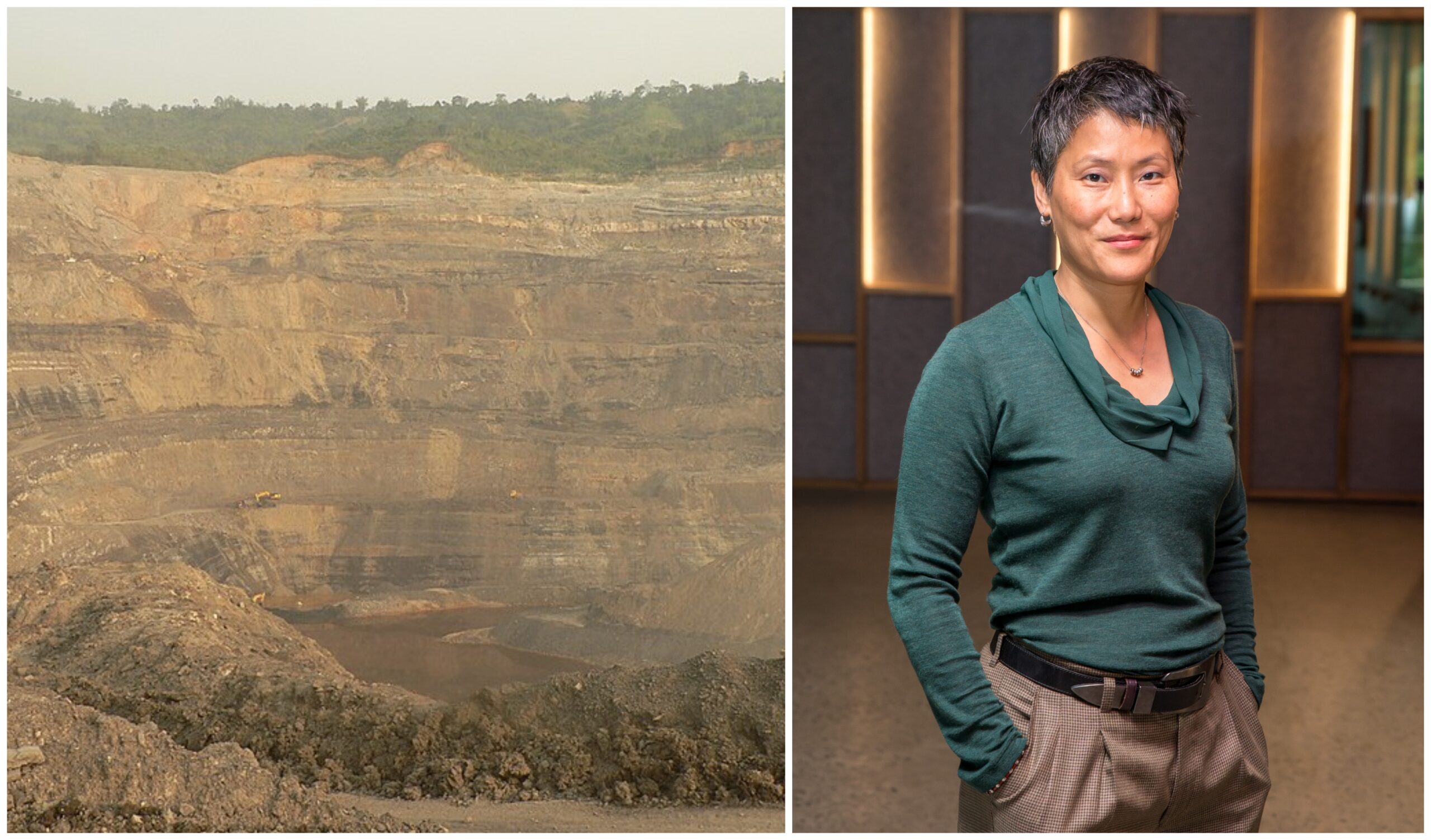 Coal and oil mining in Northeast India have come to light now and then, whether it’s the recent news of illegal coal mining in Assam’s Dehing Patkai Wildlife Sanctuary, or the tragic 2018 case of miners trapped in rat-hole coal mines in Meghalaya. But, what makes resource extraction in the Northeast different from the rest of the country, is that “the long years of armed conflict and militarization (have) led to a breakdown of community life, (and) both humans and animals suffered greatly,” says Dr. Dolly Kikon, who has worked as a lawyer and an anthropologist in the region.

Growing up in Nagaland amidst the armed conflict in the 1980s, Dr. Kikon says that her experience of the militarisation and conflict continues to influence her writings and research work. In 2019, she published two books, “Living with Oil and Coal: Resource Politics and Militarization in Northeast India” (2019), and the co-authored “Leaving the Land: Indigenous Migration and Affective labor in India” (2019). Dr. Kikon is currently a senior lecturer at the University of Melbourne. In this interview with Vaishnavi Rathore (VR), she talks about her work on resource extraction, the outmigration from Northeast India, Nagaland’s conservation culture, and the everyday experiences of militarization in this region.

VR: You have been a student of law and anthropology, and also worked on human rights. In your work, how do these three fields come together?

DK: Since the 19th century, resource extraction has been a lucrative activity in the Northeast. It has a long colonial past, and even after the transfer of power in 1947, the extractive regime continued. I note this in my book “Living with Oil and Coal: Resource Politics and Militarization in Northeast India.” [Between 2014-15, Assam contributed 12% of India’s crude oil production, 9% of natural gas production, and has been recognised as a prospective site for the extraction of hydrocarbon, shale, and coal bed methane.]

Now, for anyone tracing the history of self-determination since 1947 in Northeast India, it is impossible to miss the connection between the claims to sovereignty, and the demands to determine one’s own future. For that, among other things, managing one’s own resources is key. So, as a student of law, and then anthropology, I have always adopted optics that combine these two fields. Using them, I try to understand what sovereignty and the right to self-determination means to different groups in the Indian subcontinent.

VR:  “Leaving the Land: Indigenous Migration and Affective labor in India,” a book that you co-authored with Bengt G. Karlsson, talks about how youth in the Northeast region are migrating elsewhere to become more ‘global’ and ‘professional’. Is there more behind this migration other than such ambitions?

DK: Yes. The out-migration we are witnessing today from Northeast India is also linked to resources and land. In this book, we address the question of how long decades of armed conflict and militarisation has deeply shaped the aspirations and desires of many young migrants. 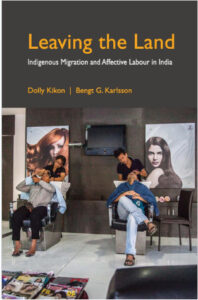 Cultivation or farming the land is a difficult profession. I always caution people who blindly claim a “return to the land” logic, as though farming will change the world. The struggles of poor farmers, loss of crops, debt, and the entry of big agricultural corporations are all challenges in the agricultural sector that many who suggest a return to farming overlook. So, among other things, we examined what it means to leave the land, to leave cultivation, and to become a migrant, and to pick up new skills and outlooks on life.

Besides that, for small farmers, marketing local produce across Northeast India has been a big challenge. Apart from shrinking land size, outmigration is also a consequence of the fact that land is no longer the only viable source to make a living or sustain households. In certain hill states, youth from rural and poor households no longer thought of agriculture as a means of sustaining their lives and futures. And lastly, climate change is real. So, the unseasonal rain and floods, which bring with them new pests and crop losses, make it impossible for many households to make ends meet through agriculture alone.

The visuals of locus entering india in specific in the parts of Rajasthan and UP are horrifying. It’s estimated that a sq km of this sworm can eat food as much as 35,000 people ! 2020 is turning even more brutal #LocustAttack pic.twitter.com/CCE4vAUbZn

VR: Broadly speaking, is Nagaland’s conservation culture different from other parts of the country?

DK: Nagaland is a tribal state and enjoys a special Constitutional provision. Chapter 371 (A) of the Constitution recognizes Naga people as the custodians of the land and its natural resources. So, Nagaland has village councils and traditional associations who oversee the governance and management of natural resources.

Additionally, for state activities, the Forest Department is also active in promoting conservation and connecting with people at the village and district levels. The challenge, however, is the overlapping powers of the tribal village councils and the Forest Departments. In many instances, they work together, but sometimes, their differing goals can cause friction between the two bodies. For example, the Forest Department declared a community forest as a Reserve Forest, thereby bringing it under the control of the state. The case is also similar–in terms of friction and governance–in Meghalaya, and other 6th schedule areas of the region.

Yet, there are always new challenges when it comes to issues of conservation. Unlike the other parts of India, in Northeast India we have to recognise that the long years of armed conflict and militarisation led to a breakdown of community life, both humans and animals suffered greatly. This is reflected well in social anthropologist Sanjay Barbora’s essay “Riding the Rhino: Conservation, Conflict, and Militarization of Kaziranga National Park in Assam”. He gives an insight into how counterinsurgency efforts intersect with conservation in Northeast India, wherein “anti-poaching” measures were allegedly used to violate the human rights of locals. [Sanjay Barbora writes in his essay, “the terrain of counter-insurgency has continued from an earlier generation between 1990 and 2009, where government’s impunity for staged encounters between the military/police and armed insurgents has allowed for similar incidents between forest guards and alleged poachers, while invoking the animal again.”] 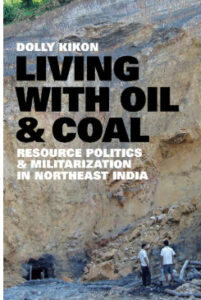 As an anthropologist, I observed that while the general impression in India remains that the Northeast region is an unsafe place, trade, and especially extractive regimes, have not only continued, but also thrived in the midst of the most brutal violence and armed conflict. This shows us, as I highlight in my book, the Indian state guards resources, and not its citizens in resource frontiers like Northeast India.

Across the foothills of Assam and Nagaland where I conducted my fieldwork for my book “Living with Oil and Coal,” armed security forces guard oil tankers and provide security to the large tea estates and oil townships. There is a sharp division between the world inside these plantations and oil townships, including the security barracks. For residents inside these protected spaces, it is the lives outside in the villages and towns that appear dangerous and suspicious. I expand more on this in my book, so if this interests our readers, do pick up a copy!

VR: Do you think that the realities of communities’ relationships with resource extraction feature in the larger sustainable development dialogue?

DK: Well, it took me eight years to write about the politics of resource extraction, so I will not give away too many spoilers from my book!

As an anthropologist working on resource extraction, I am constantly aware of the debates that push our choices towards sustainable development or clean air. I am not opposed to all that. But I feel there is room for deeper conversations and debates to take place. We cannot leave out the voices of the poor, indigenous, and marginalised communities in the process.

Some of the choices that Naga coal trading families (and perhaps in Meghalaya as well) make are completely destroying the groundwater and forests. How do we engage with these processes wherein indigenous people, who are perceived to be custodians of the soil, begin to destroy and eat up the land? What kinds of social change and transparency do we offer as scholars/researchers in engaging with these debates?

We assume that the poor families who are mining for coal in Meghalaya or Nagaland are illiterate or lack environmental awareness. But my work shows how this is not the case. Instead, it is the long-drawn structural violence that sometimes does not present the same type of choices to these groups, that people with privilege are presented with. The communities I wrote about in my book could see the ecological destruction and damage around, including the risk to their health and lives. Yet, they continued to enter into oppressive deals in the mining villages.

I am interested to see more works that focus on these actions and relations–where we know that something we do is bad for the environment yet we continue to do it–and how perhaps they can help us reflect on how the happiness and contentment of the privileged lot globally stems from the violence and misery of communities who lose out their lands and resources.

I feel we are complicit in the mining/extraction violence around the world, in one way or the other, unless we are able to engage with these uncomfortable realities. I find this reflected in Ursula Le Guin’s short story titled “The Ones who walk away from Omelas”. [The short story is about a perfect and happy community, where the residents make the choice of keeping the community this way only on the terms that a child will be locked in a basement for their entire lifetime. The people are aware of this, they feel temporarily angry, sad, disgusted, and then find a way to comfort themselves. Some of them walk away to a different, happier, community.]

How do we still manage to conveniently walk away from seeing the interconnection of extractive violence, consumption, market, extractive regime, and labour around us? This is something I wanted readers to think and reflect in my book.

VR: How is it working as a woman anthropologist on migration and natural resource extraction?

DK: My existence as a human being, an earthling, a woman, a Naga, a tribal, a scholar, a thinker, a feminist, and an activist are all predicated on the solidarity and generosity of a multitude of communities across the globe.

I was born in Nagaland and the friendships I forged there continue to nurture my soul as much as my teachers from Delhi University who mentored me. All the communities I have been part of–from the Naga Peoples Movement for Human Rights, to the Occupy Movement in the United States during my graduate school days, to the anti-racist forum and poetry collective in Melbourne–have shaped me as a thinker and a writer. I am also constantly humbled by my students as they reflect on issues and come up with projects and conversations about how we can shape a just future, an equitable future, a sustainable future.

Just as I approach complex questions with my training in law and anthropology, along with my upbringing as a Naga in an armed conflict situation in Nagaland, my friends, colleagues, and students also adopt their own approaches. This human experience for me has been truly incredible.