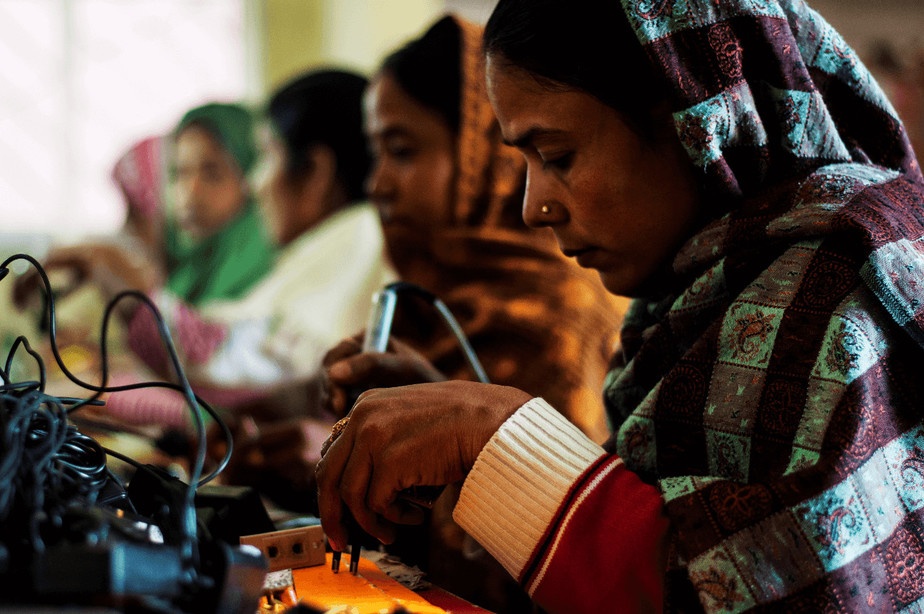 Last year, at the age of 20, Nandita Devi was married into an agricultural family from Bihar. She would spend her days on the roof of her in-laws’ house, watching how the neighbouring women farmed, collected and even sold their own produce. They would do so by learning from each other, supporting one another, and bringing their families together in the interest of serving their community.

Despite not having any experience in farming or entrepreneurship, Nandita hesitantly approached her neighbour Sunitaben, asking for mentorship. Sunitaben immediately onboarded Nandita into the Karn Bhumi Farmer Producer Company, which is a female-farmer-owned-and-run producer company that promoted financially and ecologically sustainable farming. Fastforward one year, and 21-year-old Nandita Devi now runs Karn Bhumi’s (profitable) local nursery, all from her roof. The nursery helps other female farmers integrate sustainable practices into their agricultural work.

Nandita attributes her rapid transformation from student to agricultural entrepreneur to the collective enterprise she became a shareholder in, where she said she learned how to be both a farmer but also one of the community. “Hum behenein hi to mohalla hain”, she says, which translates to “us sisters are the community itself”. Such an enterprise, whose foundation relies on the value of the collective in negotiating the many challenges that come with entrepreneurship, is known as the Collective Social Enterprise model.

In collective social enterprises, the whole is greater than the sum of its parts. Overall, these enterprises aim to become financially sustainable businesses (hence the term ‘enterprises’) that create social impact. However, what differentiates these models from a socially conscious business is the value of the “One Person, One Vote” model — every shareholder gets an equal say in how the business is run, regardless of the monetary value of the shares they hold.

This allows the collective to come together and gain the strength (metaphorically, but also in terms of their ability to bargain and raise capital) necessary to continue their entrepreneurship. This very specific “collective” model of entrepreneurship creates safety nets during women’s struggle, while also presenting them with the tools for growth.

How do women benefit from collective entrepreneurship?

Women entrepreneurs are hardly recognised and are often left out of policy conversations. The COVID-19 pandemic has hit work and livelihoods hard, at a time when they were already spiralling downwards in India. World over, women continue to suffer the most; as for India, studies of women-led rural enterprises found that revenues had halved in women-led businesses, with 11% of the 2000+ respondents facing permanent closure of their businesses.

Through all this uncertainty, collective social enterprises of women from the grassroots have been instrumental in providing work, economic support and relief, which offer some security to its members and their families. A study conducted by SEWA Federation found that 44% of the members in cooperatives reported receiving support from their cooperatives during the pandemic, out of which 71% received support with their work and income-related needs.

Another example is SEWA Anubandh, an aggregator platform for enterprises (collective, micro, and nano), which generated pre-orders for weaver collectives in West Bengal and artisanal clusters in Rajasthan. This offered much-needed liquidity to return directly in the hands of members who were strapped for cash and burdened with overspilling stocks.

Besides different forms of security, collective social enterprises offer a bundle of services that benefit women workers and entrepreneurs, from organizing their campaigns, creating financial or market linkages, generating policy advocacy, ensuring access to entitlements, and enhancing the mutual aid available at any point in time. For example, Ashminadiben, a weaver in West Bengal tapped into her local weavers collective to take a loan for fixing her home, after Cyclone Amphan destroyed her roof and her loom. On the other hand, in Ahmedabad, women shareholders of Lok Swasthya Mandli (a cooperative that runs low-cost pharmacies) not only earn dividends but also have access to health camps and digital literacy training that are conducted by the cooperative.

Alongside democratising decision-making and offering security nets, social enterprises are also a model that gives women the much-need space to innovate and experiment with their entrepreneurial inclinations, thereby allowing rural women to enter non-traditional spaces and livelihoods. This potential for self-growth is often under-estimated, and Sanno ji is a great example of the same. She needed an additional source of income and enrolled in a mobilisation campaign from where she was linked to a low-interest loan to purchase her own e-rickshaw. Now, she drives her e-rickshaw in Jahangirpuri, in New Delhi, alongside other Vahinis (or a collective of women e-rickshaw owners and drivers) who are slowly making women feel safer on the roads. In Bihar’s Munger district, Sita Devi learned how to repair solar-powered fans and lights as a ‘solar agent’ working with Sarthak (Pvt) Ltd Company. Her technical skills have earned her significant respect within her community.

Of Pain Points and the Path Ahead

Potential notwithstanding, women-run collective social enterprises face a significant number of challenges when it comes to scaling. Of these challenges, the need for hand-holding appears as the predominant struggle, with a lack of professionalisation and entrepreneurial mindset as related difficulties. Gita, an informal economy worker from Munger (in Bihar) was instrumental in setting up the first women’s credit cooperative in Bihar and ran it for over 5 years as Chair of the Board. However, as the cooperative scaled, she found herself unable to keep up with the demands of a rapidly growing enterprise and resigned from the Board, claiming that running it went beyond her capabilities.

So where does this leave the state of female entrepreneurs and workers? The impact of the ongoing pandemic is set to outlast the crisis itself by many years, further deepening already existing gender inequalities. Women at the bottom of the pyramid are burdened in myriad forms, and have had to face growing insecurities with little to no support available. At this stage, there is a necessity and several opportunities to further this conversation on women’s collective enterprises — it is an instrument that is capable of providing collective strength to women in the informal economy, and can foster their economic and social resilience.

Author’s Note: Against this backdrop, the Commission on the Status of Women (CSW), the principal global intergovernmental body dedicated to the promotion of gender equality and the empowerment of women is hosting CSW56, its 65th annual event.

At 6:30 pm IST on the 24th of March 2021, SEWA Bharat is organising a virtual session titled, ‘Coming Together, Forming Enterprises, Entering the Economy,’ a parallel event at the CSW65 which seeks to highlight women’s Collective Social Enterprises as a potential model for women’s economic empowerment. We encourage you to come, engage, and have your questions answered by some leading women in the field. Register by clicking here!