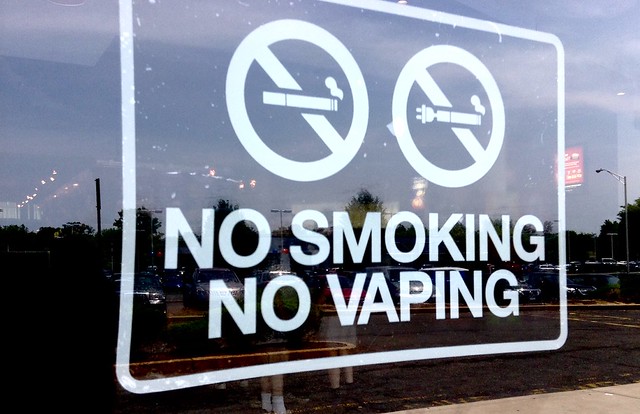 This article, published in July of 2019, has been subsequently updated to reflect recent legal developments related to ENDS in India.

Electronic Nicotine Delivery Systems (ENDS) like vapes and e-cigarettes have become popular in urban India over the past few years, owing to their perceived safety compared to conventional nicotine delivery systems like tobacco, cigarettes, and beedis.

Save for a few exceptional studies, the scientific evidence too checks out in favour of ENDS.  However, the Indian Central and state governments haven’t been too keen on ENDS, as is evident from the developments over the past few years, which culminated in an all-out ban on e-cigarettes in late September 2019. The reason? That at the end of the day, ENDS are another source of nicotine that people can get addicted to. This argument is difficult to contest at face value, especially in a country where a staggering 26.8% of the adult population uses tobacco products and sees more than a million tobacco-related deaths on an annual basis.

Discouraging Signs for the ENDS industry in India

In August 2018, the Ministry of Health and Welfare (MHW) circulated an advisory to all states urging them to halt the manufacture, sale, and import of ENDS, claiming that they pose a great risk to public health, citing examples of other countries with similar policies in place. Twelve states and union territories, including Punjab, Maharashtra, Karnataka, Kerala, Bihar, Uttar Pradesh, and Tamil Nadu have since taken heed of this advisory, limiting access to, and in some cases banning ENDS.

Apart from the MHW, the Ministry of Electronics and Information Technology (MEITY) suggested an amendment to the Information Technology (Intermediary Guidelines) Rules, 2018, that would ban the advertisement of e-cigarettes, which fall in the ENDS category. Given the lack of clear legislation about ENDS in the country, the Commerce Ministry stated that it cannot impose a blanket ban on imports of e-cigarettes. The body has since made its stance on e-cigarettes clear by urging the MHW to draft comprehensive legislation surrounding ENDS so that the said blanket ban can be implemented in the near future. In a similar vein, the Central Board of Indirect Taxes and Customs has issued a circular decreeing that all import consignments of e-cigarettes must be cleared by the drug controller first.

The final nail in the coffin came in September 2019, when Finance Minister Nirmala Sitharaman announced that the Union Government has decided to ban the manufacturing, import, export, transport, sale, distribution, storage and advertising of e-cigarettes, citing their addictive nature and associated health risks.

Thus, it is safe to say that ENDS do not have government support in India. However, on the other hand, ENDS advocacy groups like the Association of Vapers India (AVI) believe that instead of examining them in isolation as yet another nicotine-based product, policymakers must consider their role as safer alternatives to cigarettes and beedis.

Compared to the established tobacco and tobacco products industry, the ENDS industry in India is minuscule. The tobacco sector is valued at a whopping Rs 11,79,498 crore, employing 4.57 crore people in the process. Spread across a value chain of farmers, labourers, manufacturers, packagers, and traders, the Indian tobacco industry accounts for 5% of the world’s tobacco leaf export trade, generating 6000 crore rupees annually through exports. Of this, it is estimated that manufactured tobacco products like cigarettes, cigars, and cigarillos bring in Rs. 1830 crores: a little less than 30% of the tobacco industry’s total exports.

The Indian ENDS market meanwhile, was estimated to be worth Rs. 108 crores in 2017. Though clearly a nascent industry, it is estimated to grow 60% year-on-year till 2022. Sensing a potentially large market, global e-cigarette giant Juul reportedly intends to launch its products in India towards the end of 2019, in what is considered a bold move given the government’s official stance on the subject. Keeping these facts in mind, is the governmental scrutiny of ENDS a means of protecting the tobacco industry by nipping a potential competitor in the bud?

As to the protectionism argument, Samrat Chowdhery, Director of the Association of Vapers India (AVI), believes that there is a substantial basis to it. “Although the fledgeling ENDS industry is not a great threat to the tobacco industry at face value, the long-term effects of legalizing and regulating ENDS does imply something. Time and again, it is seen that countries with such policies witness a drastic reduction in tobacco addiction, as ENDS are almost thrice as effective at helping quit nicotine addiction than the cold turkey method, and twice more effective than Nicotine Replacement Therapies (NRTs) like gum and patches. This would mean a drastic reduction in tobacco consumption and hence production, an industry that earns a lot of money for the government coffers.”

Driving home the extent to which the government has direct interests in the sector, Chowdhery points to the fact that 27.84% of the Indian Tobacco Company’s (ITC) shares are owned by government-controlled financial institutions. Following the ban, share prices of the tobacco stalwart jumped 1.5%, while that of Godfrey Phillips India and Golden Tobacco rose 8% and 4.5% respectively.

These claims are backed up by scientific evidence. The consensus of a wide range of studies published in or reported by reputed sources like Harvard Health Publishing, British Medical Journal, and the New York Times is that e-cigarettes are much less harmful than cigarettes in terms of cancer risks, as they don’t burn tobacco leaves which can release carcinogen compounds. Through his ongoing research, Mr Chowdhery is experimenting with beedi-flavored vapes to assess their uptake in socioeconomically weaker sections of society. His findings are encouraging and show that ENDS are not only affordable if made accessible to them, but also that the subjects are using them effectively as NRTs.

However, the government’s stated rationale is entirely focused on the health effects of ENDS, about which, they aren’t entirely wrong. ENDS by virtue of being Nicotine Delivery Systems can get people addicted, and at worst, dependent on nicotine. Their growing availability and relative safety can have an undesired effect. For one, a study finds that “people whose first tobacco product was an e-cigarette were more likely to initiate cigarettes over 2 years of follow-up”. After an extensive meta-analysis, the National Academy of Sciences also reached the same conclusion. To further compound this issue, schoolchildren have started using ENDS owing to their increased cultural acceptance and perceived safety. This puts them at risk of nicotine addiction for life, prompting school administrators and parents to demand a stricter ENDS policy. This factor—of ENDS being gateways to smoking and/or nicotine addiction from a young age—bolsters the government’s case. Internationally too, ENDS firms like Juul have come under fire for allegedly targeting youth specifically through aggressive marketing. Incidentally, just a week after the ban in India, Juul CEO Kevin Burns stepped down amid growing concern in the USA about the harmful effects of ENDS

But as it turns out, on this question too there is much potential for debate. A large-scale study suggests that by redefining the metric of cigarette use to mean regular cigarette use–as against a person who might have taken a few puffs–the results do not hold, instead showing that e-cigarette use does not, in fact, lead to regular tobacco use in the future. A review conducted by Public Health England also mentions that often-cited studies that link e-cigarette use with tobacco use later on in life also don’t account for factors like sensation seeking, curiosity, expectancies, genetic vulnerabilities, etc. which might distort the results.

While proponents and opponents of ENDS may choose to cherry-pick studies to suit their cause, it appears that only time and more studies conducted within a somewhat similar framework will yield some scientific consensus.

Answering the question of ENDS legislation requires answering multiple related questions, for which there is no scientific consensus. Pragmatism then is the call of the hour. To the issue of schoolchildren getting hooked to ENDS, there is a case to be made for smarter regulation; once approved by the government, market forces may give rise to innovations in limiting access. Smart legislation like monitoring their sale around schools could also be implemented to complement such innovations.

Given government stances, however, that approval seems to be the most immediate roadblock. Add to the mix its economic interests in the tobacco sector and the number of people the sector employs in India, and the science may seem a secondary concern to a few; sure, it’s a matter of public health, but it is also about millions of livelihoods.

Even if the government reverses its stance in the future, Mr Chowdhery believes that the growing negative perception of vapes and e-cigarettes in India is dangerous. Elaborating further, he references the UK government which was completely anti-ENDS, then reversed its stance, and further directed the NHS to use e-cigarettes as a means of nicotine replacement therapy. Though the official position had taken a 180-degree flip, the NHS is still battling the persisting negative perception of ENDS created due to the government’s initial apprehension. In India then, where millions die from smoking-related diseases, restrictive ENDS policies can be a missed opportunity for years to come.