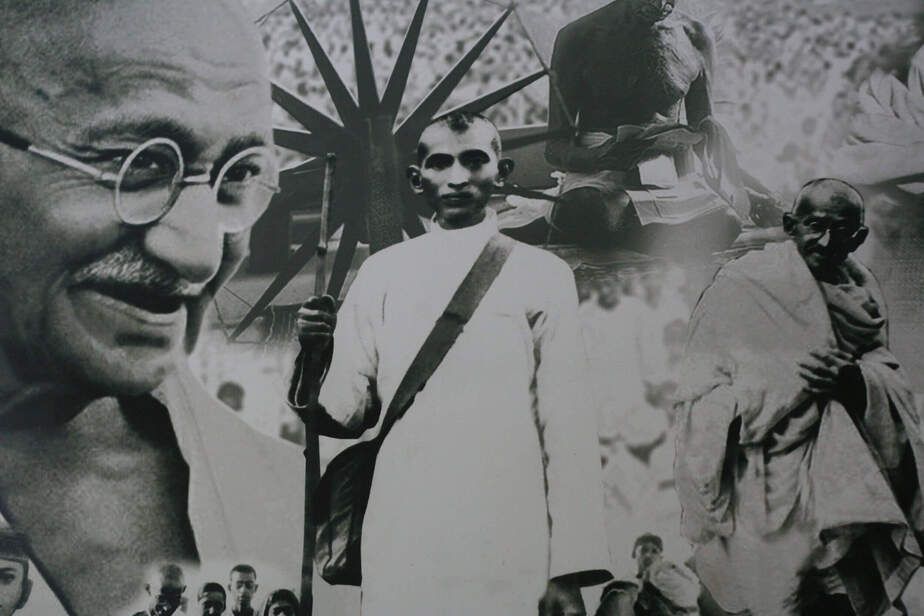 Researched and written by Arjav Kulshreshtha.

M. K. Gandhi, also known as Gandhiji, was born on 2nd October 1869. He was the leader of India’s struggle for independence and advocated non-violent means in this endeavour. Throughout the Indian national movement, he has been revered as a peaceful, tactical and sympathetic pacifist of a man. At an early age, Indians have been taught that Gandhiji is a paragon of kindness. Titling Gandhi as the ‘Father of the Nation’ epitomises him in the chronicles of India’s history as a man whose ideas, principles and virtues were so important that they shaped the origin and subsequent growth of the nation as it stands today.

69 years after he was assassinated, an unbiased approach is essential to understand the intricacies of Gandhi’s stance on issues like caste and women; this entails exploring beyond classroom syllabi which stress on his insistence on nonviolence and peaceful means of protest.

Closely following Gandhi’s interpretation of caste reveals something peculiar. In 1932, Gandhi had started a campaign for the upliftment of the Dalits, whom he called Harijans, or “Children of God”[1]. In 1933, Gandhi started a 21-day fast for self-purification for the sins of the upper castes[2] and began a year-long movement for the upliftment of the Harijans. According to Gandhi[3], religion and caste were separate concepts that were distinct and independent of each other.

Ambedkar was critical of Gandhi: he believed that Gandhi was not truly in favour of the upliftment of the lower castes

For Gandhi, caste and varna were the same. This was problematic for some Dalit leaders such as Ambedkar who accused Gandhi of wanting to retain the caste system. Gandhi believed that the varnas established duties, not rights and that there is no duty too high or too low for an individual.

For him, the caste system was a social instrument wherein harmony and cooperation amongst the different varnas/castes can only be achieved if each varna adheres to its own occupation[4] and performs their respective duties. Accordingly, it was held by Gandhi that all four varnas were simply a means to sustain a living. Ambedkar felt that Gandhi was ensuring lower castes’ continued domination by the upper castes, even within the occupation-model of the caste system that he had proposed.

Ambedkar criticised Gandhi on three important points[5]. Firstly, as to whom would interpret the shastras. Gandhi had made it clear that the shastras must be interpreted by the saints and that people should follow these interpretations and have faith in the interpretations of these saints. Gandhi believed that a religion should not be judged by its worst examples, but by its best specimens. Ambedkar, on the other hand, believed that if only the saints can interpret the shastras and the people must follow them blindly then how will the people know that what the saint is interpreting is correct, both morally and spiritually?

Secondly, Gandhi said that people should follow their ancestral calling i.e. follow the profession that has been predetermined by their varna and caste because the caste system was a better means of ensuring social stability than the class system was. Gandhi had immense faith in the goodness of man and believed that the best form of life which would ensure social cohesion would be a simple life in which individuals lived like how the villages of rural India live.

Ambedkar called Gandhi a hypocrite on this stance; if Gandhi truly believed in the notion of following one’s ancestral duty, then he should never have become a lawyer and should have become a merchant like his ancestral calling dictated. Following one’s ancestral calling would mean that the upper caste people would get the more influential occupations and the lower castes would be restricted to their meagre occupations which continues to garner social ridicule and humiliation. It would negate the entire movement for the social upliftment of the lower castes.

Thirdly ─ and perhaps the most critical ─ Gandhi was initially not in favour of inter-caste marriage, drinking and eating. This in itself speaks volumes. However, according to Christophe Jaffrelot[6], Gandhi’s views changed radically between the 1920s and the 1940s, by which time he actively advocated for inter-caste marriage. In fact, in his biography, Gandhi said that a lot of his views evolved during his time as a leader of the national movement.

Gandhi was always suspicious of western ideals and their impact on Indian society, particularly Indian women. In fact, his views on the status of women are peculiar for an important national leader who was loved by all.

The idealised woman for Gandhi was Sita: she represented the image of a pure and chaste woman

Gandhi believed in the ‘superior lifestyle’ of the Indian villages ─ the future lay in Indian villages because it was a nation of village republics. He even went so far to say that western education is ruining the men and women of Indian society and that it lures men and women to give up their native values in order to fit into the new westernised society. He maintained that all the lawyers, doctors etc. along with other members of high society should give up their privilege to live a life akin to the common peasant. Gandhi rejected western symbols of economic progress such as the railways, telegram, industrialisation etc. and even rejected parliamentary democracy; he wanted to establish a Ramrajya. This shows Gandhi’s innate distrust and dislike of the western world and its ideas and values.

The most harrowing of all may be his model for women in Indian society. The idealised woman for Gandhi was Sita: she represented the image of a pure, chaste and submissive woman. Today, it would be inexcusably patriarchal for an enlightened and progressive national leader to have a view of women which involved the ideal woman embodying chastity and submission. If Gandhi (and presumably, his followers) could have such an understanding of women’s roles in society, then it is not hard to understand India’s social structure today reflects an eerily reductive notion. Gandhi’s ideal of womanhood was Sita, but his message to Indian women was to rise above wifehood and become ‘sisters’. 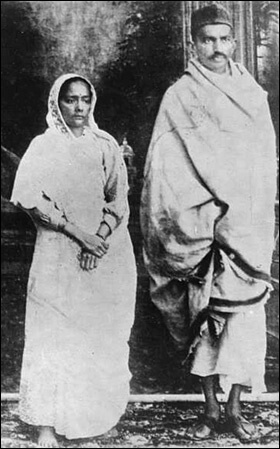 M.K Gandhi and his wife Kasturbhai in 1914, Wikimedia Commons

In his words, “A sister is such to all the world, while a wife hands herself over to one man. Wifehood is needed, but has not to be cultivated, as it includes the possibility of satisfaction of passion”. He felt a wife could never become a sister in the full sense of the word and lamented that Indian women ‘know how to be wives, not sisters’. He believed that it was possible to become the world’s sister only by making Brahmacharya ‘a natural condition’ and being ‘fired by the spirit of service.

Gandhi conceded that every husband was not likely to be an ideal man. Therefore, when asked how a wife could defy her husband to undertake national service, Gandhi denied that a wife need suppress herself or believe in her husband’s absolute claim over her. He felt that the famous sixteenth-century saint-poet Mirabai had ‘shown the way’, and saw her as one who had the courage to reject the confining role of wife and mother and to remain undaunted by the persecution which she had to suffer at the hands of her husband and his powerful family. For Gandhi, women must not limit their interests to what is understood as women’s issues; instead, they should be involved in the rebuilding of society as a whole.

Gandhi also expressed contradictory views on marriage. On one hand, he encouraged those who wanted to live a socially useful life to stay unmarried. A part of his thinking emphasised that establishing one’s own home and family limits down one’s interests and channels one’s altruism towards a few select individuals rather than letting it flow freely to all humanity.

And on the other hand, Gandhi did not reject the institution of marriage in its entirety because he realised that sexuality could never be eliminated, no matter how much he advocated in favour of conquering one’s sexuality. He saw marriage as the only existing ─ albeit inadequate ─ restraint on an individual’s sexuality. He espoused a way of life that minimised sexual contact within marriage and its complete repression outside of it. In his words,

“Marriage is a fence that protects religion. If the fence were to be destroyed, religion would go to pieces. The foundation of religion is restraint and marriage is nothing but restraint”

From these instances, we see that Gandhi only tolerated marriage because it was a means to control and constrain the sexuality of individuals. Sexuality was viewed as a negative tendency that would have adverse effects on society. It also goes to show how the best way of life for Gandhi was one wherein an individual successfully represses their sexual desire and lives an unmarried life.

What Gandhi failed to realise was that this binary understanding of marriage overlooks the fact that in order for restraint to be meaningful, it must be self-defined. The restraint in marriage is not organic but is socially imposed. He also overlooks the fact that the kind of marriage he advocated institutionalised double standards which arose out of a situation of unequal power relations. Therefore, in line with Gandhi’s thought, the institution reproduces and reinforces the patriarchal power relations that pre-existed between men and women.

There is no doubt that Mohandas Karamchand Gandhi played a major role in achieving the independence of India and in ensuring the withdrawal of the British. Still, there is much that goes unknown in conversations about several historical figures about whom we learn about in school and outside of it. Readers of India’s history must look back at the kind of belief-systems which were created so as to objectively evaluate them.

Many a time, we as a society epitomise historical figures who are tailored as paragons of good virtue and holders of progressive ideals. A progressive society must converse with its “heroes” before it immortalises them in the upper echelons of its rich and diverse history.

[3] ‘A Vindication of Caste’; Gandhi, Mahatma