In any healthy democracy, the mainstream media is entrusted with the role of a watchdog, expected to always hold power to account. Unfortunately, much of India’s fourth estate has been underperforming to put it lightly, being reduced to a lapdog instead.

On the 5th of August 2019, the Central government—led by Prime Minister Narendra Modi—enacted one of the biggest policy decisions of its tenure by revoking the special status guaranteed to Jammu and Kashmir under Article 370 of the Constitution of India and abolished Article 35A.

PM Modi in Lok Sabha: There were statements made by former Chief Ministers of Jammu and Kashmir that were unacceptable. These are leaders who don’t trust Kashmiri people that is why they used such language, but we trusted Kashmiris and abrogated article 370 pic.twitter.com/n1WUA2G2UN

Following this Presidential Order, all communication lines were severed in the Kashmir valley under the pretext of curbing violence. The people of Kashmir, already in the midst of a prolonged separatist insurgency, witnessed several detentions around them, be it journalists, dissenters, and opposition party leaders including Mehbooba Mufti, a former Chief Minister of Jammu and Kashmir. The abrogation was reported, analysed, and debated across all Indian journalistic outlets, albeit with varying levels of commitment to balanced journalistic discourse.

Arnab Goswami’s Republic TV led the charge when it came to jingoistic media coverage of the move. A close analysis of its coverage shows how India’s second most-watched English news channel was incapable of exhibiting some basic tenets of honest journalism.

But How Can We Evaluate Honest Journalism?

Understanding the context of the ‘public sphere’ will help us notice how Republic TV’s journalism operates. The theory of the public sphere traces its legacy to Jürgen Habermas’s seminal work The Structural Transformation of The Public Sphere. Habermas’ public sphere is defined as an interactive space (virtual, imagined, or otherwise). More importantly, as a core component of social life, it is deeply involved in the generation of public opinion.

This public sphere is not to be seen as a clique. Rather, it should be seen as an egalitarian public forum that engages in critical debates without coercion by the State or persons of influence. Yet, it cannot operate in a theoretical vacuum; the public sphere must be constituted, represented, and made visible through a tangible network that generates discussion and debate.

This takes place most constructively in the form of journalistic media, which—through its selection, packaging, transmission, and interpretation of information—stimulates public discourse and upholds the responsibility and functioning of the public sphere in everyday society. 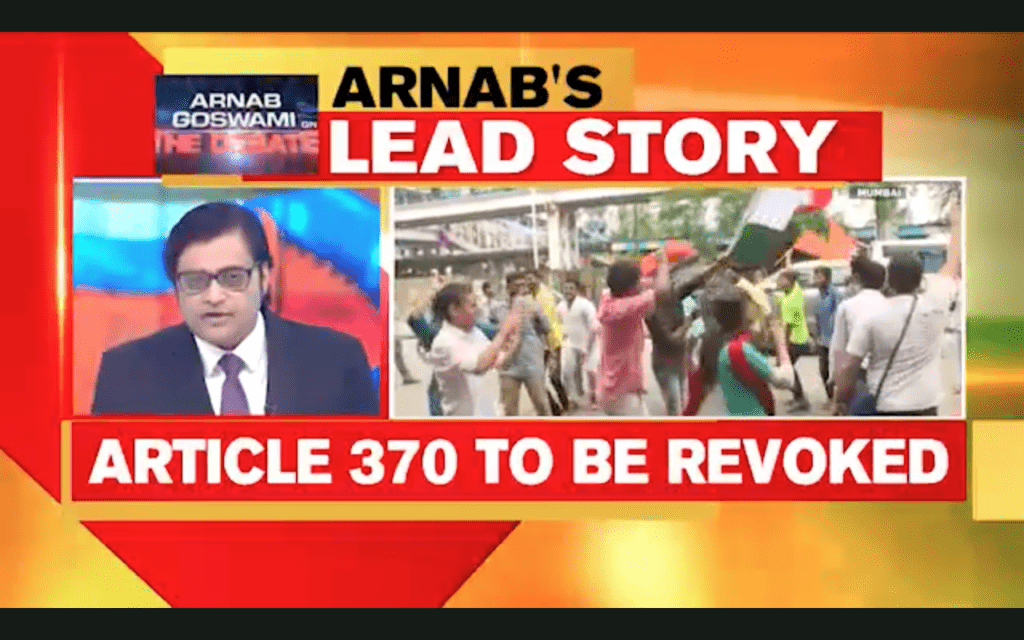 Now, to test the credentials of the public sphere that has been constructed by Republic TV’s coverage of the abrogation of Article 370, let us look at three items that were broadcasted on the channel. The first is an episode of the primetime debate, moderated by the channel’s founder Arnab Goswami, which aired for a couple of hours (in three segments) on 5th August, 2019. The other two items feature ground reports carried out by staff reporters: also on the 5th of August, one discussed the impact of the abrogation with former members of India’s Defence Forces, along with some Indian civilians; another gathered opinions of Kashmiri youth and aired on 9th August, 2019.

Weighing these three items in light of the public sphere is achieved by using a framework of journalistic values developed by Professor Mark Deuze. This framework includes the following values: public service, objectivity, autonomy, immediacy, and ethics. These values must be upheld to achieve what can be termed as the basic function of journalism: the quest for truth and its dissemination.

These values are divided into four criteria: framing and labelling (which involves how the issue is couched in specific language), moderation (in this case, how Goswami questions and responds to his panellists on the debate), tone and mood (which reflect the emotional environment underlining the discourse), and symbolism (which pertains to visual communication through non-verbal messaging).

When it comes to ‘framing and labelling’, Goswami’s partisanship is clear in his opening monologue for the primetime debate where he declares (with characteristic gusto) that he feels a “sense of true pride” as an “injustice of 70 years had been reversed,” and that the only people unhappy on 5th August, 2019 are the “selfish anti-national lobby” (see second and third minutes of the opening segment).

Police in #Kashmir have booked a freelance photojournalist Masrat Zahra under Unlawful Activities (Prevention) Act for ‘uploading anti-national posts with criminal intention to induce the youth and to promote offences against public tranquility.’

In the second segment of the debate, he labels Kashmiri leaders under house arrest as “conflict entrepreneurs”. An ironic epithet, considering how Mehbooba Mufti’s People’s Democratic Party was part of a three-year coalition with the BJP which unravelled in June 2018. A statement denouncing Kashmiri separatists flashed across the screen that read, “Azadi (Freedom) Industry R.I.P.”. The labelling is also clear in the ground report of 5th August whose headline described the abrogation as a “Modi Masterstroke.”

For the second metric of ‘moderation’, Republic TV violates even the basic notions of accuracy and sincerity. Goswami consistently refuses to challenge or counter-question any of the panellists siding with the BJP on his debate. On the other hand, he persistently interrupts and heckles those opposing the abrogation. When one of the panellists, Pavan Varma (a senior leader of the Janata Dal party) draws attention to how political morality had been flouted by the BJP, referencing the party’s overlooking of “consultation”, “concurrence”, and “recommendation” in the text of Article 370, Goswami sidesteps the point altogether and continues harping on the technicality that the article was a temporary measure. Reiterating the same defense for all counter-arguments did away with the aspect of reasoned debate that is central to the public sphere.

In the case of ‘mood’ and ‘tone’, a single statement of Goswami aptly encapsulates the overarching narrative fostered by his debate(s). In the seventh minute of the third segment, Goswami comments: “If you don’t respect India, you should go to Pakistan”. This is in response to panellist Abdul Razak Khan (a political activist) raising the topic of mass arrests orchestrated by the BJP in Kashmir. Goswami’s conflation of criticism against the government with irreverence for the nation is a classic instance of a false (and unnecessary) dichotomy.

During the ground report of 5 August 2019, everyone visible on screen (including the reporter himself) starts chanting “Jai Hind” in the third minute to create a celebratory atmosphere on the broadcast. Such nationalistic rhetoric has been a recurring layer of structured propaganda across history; in the face of the divisive political zeitgeist surrounding Kashmir, not only is this irresponsible, but it also endangers the maintenance of India’s public sphere.

Finally, on the count of ‘symbolism’, the ground report from 5th August shows the reporter and others present on-site raise the Indian tricolour, proud of the abrogation. In the ground report of 9th August, 2019, a serene and visually appealing corner of Kashmir is picked out for the broadcast, with all three interviewees appearing calm and relaxed. During the fifth minute of the first segment of the debate, Goswami thumps his chest as a gesture of pride on the “integration” of Kashmir. All these visuals signal the idea that things are hunky-dory inside Kashmir while the rest of the nation is jubilant at the abrogation of Article 370.

The discourse produced by Arnab Goswami and Republic TV is necessarily top-down and follows a deductive approach. Republic TV arrived at a pre-emptive premise that the abrogation of Article 370 is a momentous decision and a reason to rejoice for India. This may be fine, but not without doing their due diligence of representing the public sphere impartially. Presenting selective facts, histories, and perspectives do little in this regard.

Why weren’t any Kashmiri activists included in the debate? Youth protesters and those released from detention were never contacted for ground reports from the other side — the side that speaks about the violence in Kashmir, the way information was withheld from citizens, and the general spirit of upheaval, condemnation, and solidarity offered by the rest of India post-abrogation.

Bordering on verbally harassing panellists and brazenly insulting them (Goswami told Suneer Chopra that “I’m not lily-livered like you”), as well as a flagrant disregard for the journalistic fraternity exhibiting different views (“[There are] enough pseudos on different channels doing pseudo nonsense”), Republic TV has tarnished the integrity of discussion and vigilance in the public sphere.

The abrogation of Article 370 is just one event in the long list of brash reportage adopted by Republic TV. Not only does their brand of journalism weaken the essential foundations of the public sphere, but it subverts these foundations by imposing a monolithic representation of unshakable solidarity with the ruling government’s decision. One doesn’t have to look far to see the irony that the channel is a republic without autonomy; it is a medium blatantly ignorant of the republic’s public interest.