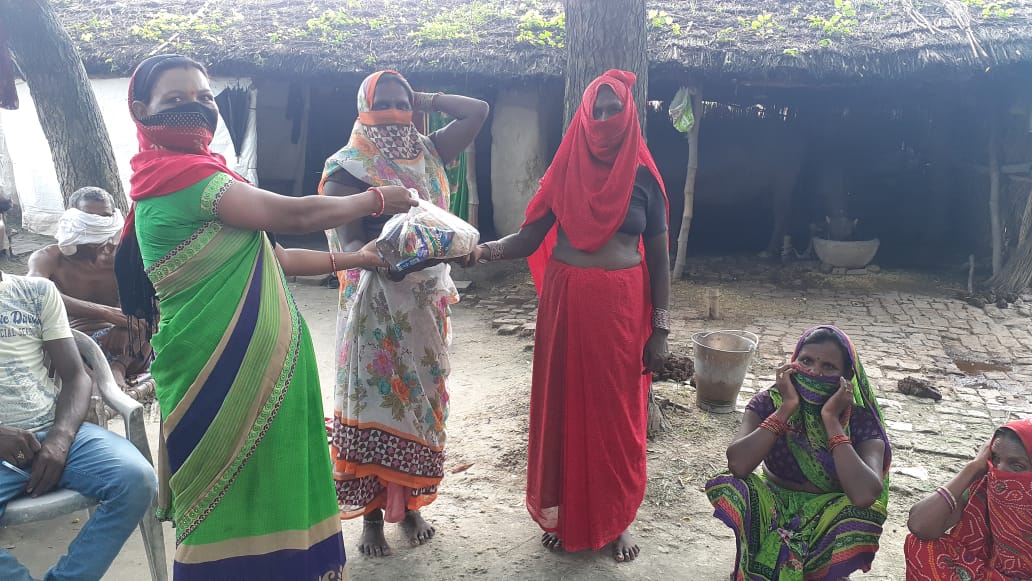 Even behind his face mask, Anil Kumar from Uttar Pradesh looks frustrated. “We were supposed to get 1 kilogram of free chana [chickpeas], but we received only 900 grams. Most of the other goods provided are also 1.5-2 kilograms less than what we are sanctioned to receive.” Anil is addressing the camera in this video, while referring to the Uttar Pradesh government’s announcement of free rations for the poor under the Public Distribution System during the pandemic.

A community correspondent from Video Volunteers—a platform that brings reportage from the most media dark districts in India—posted this video in June 2020, just after the nation-wide lockdown had finally lifted. The video journalism at Video Volunteers is produced by correspondents who are members of the communities they report about.

During the national lockdown imposed last March and throughout most of last year, this platform became one of many community media initiatives that busied themselves with reporting on local stories—like Anil Kumar’s—and those of the thousands of other migrant workers who had returned to their home states. While the mainstream media was bringing larger trends to the national headlines—such as the imposition of the lockdown, migrants returning home on foot, and economic recovery—community media filled in the large gaps the national media left behind.

“Most of our work last year documented the experience of migrant workers after they returned to their home states, how the pandemic impacted rural economies, and the vital role that civil society organisations played in supporting people,” Jessica Mayberry, the Founding Director of Video Volunteers tells The Bastion. “During the lockdown, our community correspondents had to adapt to the crisis. They started audio reporting, since going out to the field to record videos was not possible. They ‘worked from home’ and documented the stories of their own families and homes. [When this happened] We realised that about 30-40% of our own network of volunteers did not even have enough to eat, so, for us at Video Volunteers, it became a foremost priority to take care of them. These were stories in areas that mainstream journalists had trouble accessing, and without our community correspondents, they would have remained untold.”

The Power of Audio

CG Net Swara—a voice-based community portal based in Chhattisgarh—also helped document local problems during the lockdown, by converting them into actionable pieces of information. Since 2010, CG Net Swara has been reporting on stories from the Central Gondwana region, with stories being filed by reporters who are members of local communities here. Listeners call a specific number to either record a story or to listen to one in their local language. After such a crowdsourced recording is taken, a trained journalist edits and verifies the report before making it available for playback either on call, or on CG Net Swara’s website. The 1-2 minute voice messages produced sound a little like mini-podcasts, with interviews typically ranging across various issues such as widow’s pensions, lack of roads, and inaccessible hospitals.

But, during the migrant crisis, CG Net Swara was flooded with phone calls of a different nature. “We belong to Bihar but had come to Madhya Pradesh to work. We are now stuck because of the lockdown. Our work has stopped and we have no rations available to eat. Please help,” Pintu Kumar can be heard saying in an audio message recorded in May of 2020. He then narrates the address of where he is located and his mobile number for further communication.

“Through the portal, these voice messages reached various officials and civil society organisations that could extend their support [to distressed individuals],” Shubranshu Chowdary, a core team member of CG Net Swara tells The Bastion. “About 60% of those individuals who had recorded a problem with our portal during the lockdown called back to say that their problem was solved.”

“Most of our listeners are either illiterate or semi-literate. Voicing their grievances through audio is more efficient for them, as opposed to physically meeting the official and filling out a grievance form, which anyway could not be done during the lockdown,” Shubranshu explains.

Anushi Agarwal from Maara, a media and art collective agrees. “With community radios, people develop a long-term association with the voice they have been hearing, they know the radio reporter who belongs to the same community as them, and they know where the radio station is. There is a trustworthiness that develops with listening to a voice which is not always possible to develop in say, print media.” In collaboration with UNESCO, Maara has coordinated with 13 community radio stations across the country as part of a crisis preparedness project since May, 2020.

Community radio stations involved in the project experimented with this subject matter. A radio station in Bihar and another in Gurugram collaborated for a program on Bihari migrant workers in Gurugram. Apart from the issues that they faced, the program also indirectly touched upon important debates: who is considered a social ‘outsider’, who is an ‘insider’, and how have these understandings changed over the years? These were some of the larger questions emerging from the very local stories that reached the community radios’ listeners.

Broadcasting through audio messages also became a go-to option for the NGO Foundation for Ecological Security (FES) operating in Odisha’s Keonjhar district. At a time when travel to panchayat offices was discouraged, migrants who had returned home missed out on crucial labour updates presented on the panchayat office’s public notice board. Many remained unaware of an increase in wage rates under MNREGS in their district—Keonjhar’s workers were to receive ₹298/day owing to funds coming in from the District Mineral Foundation, as opposed to the state’s wage rate of ₹207/day.

Identifying this communication gap, FES then came up with an innovative idea in September of 2020. Jeeps here were installed with a loudspeaker. They then drove through the undulating forests of the district, announcing important updates in Odia and Desiya (another local language) about MNREGS and COVID-19 protocols across 150 villages. “Locals also wrote a song about the scheme, and we started announcing information using that as well,” Kartik Prusty, a member of FES says.

When these loudspeakers took information to the doors of residents, they also created an additional ripple effect. The communities started holding the concerned authorities accountable. “When community members realised that their job cards were not reflecting the correct wages, they went to the panchayat officials once restrictions eased to question them about this,” explains Kartik. “The demand for better implementation of the scheme increased widely, now that people were empowered with information.”

Apart from loudspeakers, FES also resorted to another trendier option for information sharing—the messaging application WhatsApp. Important information was also shared through texts, audio, and videos to block-level WhatsApp groups. These groups had teachers, youth or other informed citizens added to them who were comfortable using both the Internet and mobile phones, and could pass the message on.

WhatsApp was also popularly used by Video Volunteers. “With work from home, we had to shift our strategy, while keeping the essence of our work alive—which is to communicate actionable information. Before the pandemic, our community correspondents would record videos with problems and bring them to the concerned authorities; this was not possible to do in-person during the lockdown. So, we took this time to create WhatsApp groups that brought all stakeholders online. Videos could be shared to the authorities in them to find solutions,” Mayberry says. Approximately 141 such groups are currently functioning in the 23 states where Video Volunteers works.

WhatsApp was also used in various army cantonments across the country; defence personnel used this app for a different purpose—to beat fake news.

At the end of each day during the lockdown, a volunteer from the Armed Forces documented all the fake news of the day, verified its inauthenticity, and sent this report across all WhatsApp-based groups of Resident Welfare Associations within most cantonments across the country. This information reached out to officers, other ranking soldiers, and their families. “Once COVID-19 cases started rising in India, we saw a lot of misinformation coming up about cures for the virus and it’s treatment,” says a senior officer. In many cantonments, this fake news busting service over WhatsApp is still continuing.

The community radio stations Maara worked with were also no strangers to fake news. While the radio stations broadcasted only verified announcements by government officials to avoid misinformation, there were local pieces of fake news that would emerge on the air waves. But Anushi believes that community media played an important role in questioning this information. “In Bihar, people began worshipping a goddess ‘Corona Mai’ and kept fasts to please her to prevent the spread of coronavirus,” she says. “Since the radio reporters are also from the community, they better understood the culture of the region that led people to believe in this deity. Instead of blatantly telling the listeners that they are ‘wrong’ [for worshipping Her], which may lead to community distrust of the radio station, community media can help bring out the different perspectives of believers and non-believers, urge listeners to question their choices, and leave the final decision to the listeners. That’s what the radio station in Bihar did, it made discussions possible, and  listeners started questioning their choices. ”

At a time when the world stood still, national and international news updates kept people informed on COVID-19. But, in media dark geographies where people did not see their experiences being represented in such newswires, it was community oriented media that disseminated information for action using new and traditional technologies. But, more importantly, such platforms documented the experiences of populations whose stories otherwise would have been left unrecorded in one of the world’s most notable events in history.

The Slow But Sure Path to Mitigating India’s Floods