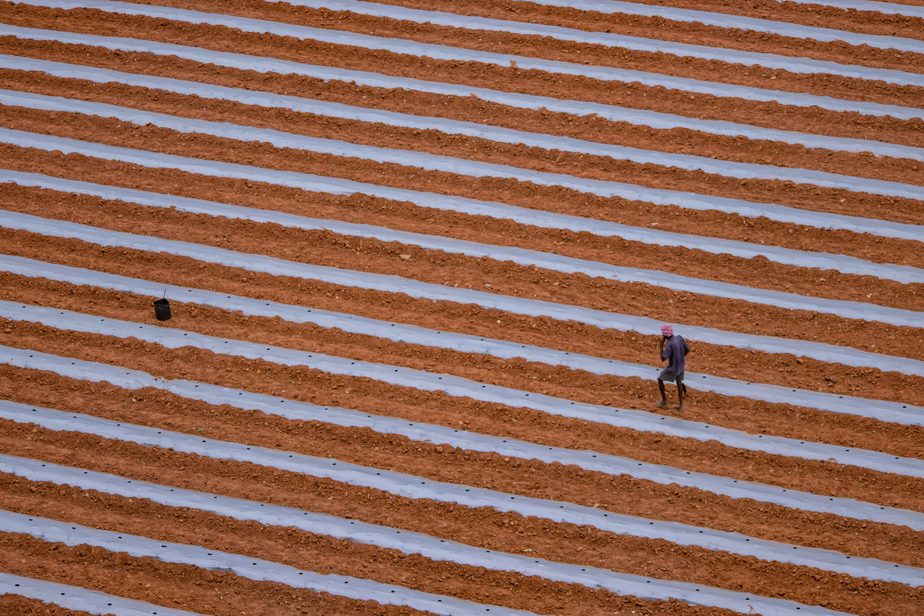 This is the second article of a three-part series on sustainable consumption and food security in India, supported by Pristine Organics. Click here to read part one and part three.

“Right now, the model is: do you care about sustainable agriculture? Go purchase organic food. Why is the emphasis on just the consumer and on ‘purchasing’ our way to sustainability?” Aniket Aga, an anthropologist and Associate Professor at Ashoka University, asks me in an interview. Aga continues, “We can purchase our way out of unsustainable food to a small extent, by accessing alternative food choices in the market. But we cannot purchase our way out of social and environmental injustices linked to food production, distribution, preparation and waste disposal.”

Sustainable food is often discussed as a whole instead of looking at the smaller, complicated components that make it up. As the first article in this series noted, sustainable consumption still relies on Western frameworks of conscious consumerism that are individualistic and unaffordable for a large population of Indians. Too often, popular models of sustainability heavily focus on how we can be conscious consumers of products in the market, rather than addressing the prevalent systemic problems leading to an unsustainable food chain in the first place.

Simply put: to a limited extent, raising awareness on buying organic produce or switching to vegan or vegetarian diets may help solve concerns over people consuming more processed food, and meat and dairy products. But, they do not directly address the problems related to unsustainable agricultural and food habits that the country faces.

So, before providing solutions to an expansive problem, looking internally and addressing the shortcomings of food production and distribution in India is a crucial step towards a sustainable and inclusive future. The question is: where do we start?

The first step is taking a closer look at the entire agro-food supply chain. This chain, which involves everyone from the farmer to the consumer, is often inefficient, environmentally damaging, and fraught with social inequalities across producers and consumers. These socio-economic injustices faced by food producers and consumers are key (missing) variables in our conversations on sustainability.

You might ask: what does social justice have to do with sustainability? At the heart of it, isn’t sustainability about maintaining food, environments, and ecologies for the future?

The answer depends on whether sustainability is understood as a less environmentally harmful approach towards food, or, as an alternative to unjust and unsustainable food systems as a whole.

If the second option is to be considered, we must acknowledge that our food systems not only include what we eat and how it is produced, but also who produces it—this is where justice comes in. If sustainable food systems are supposed to be rewarding for entire ecosystems and populations both in the present and future, those rewards must encompass justice for farmers, labourers, and other producers—not just for conscious consumers.

Take organic farming, for example. While the farming process itself may be less environmentally harmful than ‘inorganic’ agriculture, are landless labourers working on organic farms paid enough? Is everyone involved in this ‘sustainable’ food system guaranteed a dignified level of material resources that allow them to fully participate in society?

Often, the switch to organic farming has little to no bearing on the socio-economic injustices faced by farm labourers on previously conventional farms—even in hubs of sustainable discourse like the United States, only 25,000 (out of 2.5 million) farmworkers are unionised, out of which a tiny percentage work on organic farms. In India, the National Standards for Organic Production only sets out rules on geography and soil conditions, and do not make any mention of minimum wages for farm labourers in organic farms.

‘Certified Fair Trade’, on the other hand, accounts for some amount of social justice as it emphasises the inclusion of marginalised communities in the production process and offers minimum wages for labourers [1]. But, narratives from labourers working in Certified Fair Trade farms point to the shortcomings of such market-based sustainability initiatives. The Makaibari Tea Estates of Darjeeling, for example, are well known for their combined certified organic and Fair Trade tea. Despite the minimum wages set in accordance to Fair Trade regulations by the Tea Board of India, estate labourers still complain of low wages, making it difficult for them to provide food for their families or pay for other expenses such as marriages or their children’s education.

So, despite the Certified Fair Trade promises made to consumers, many labourers are still yet to find socio-economic justice. As for consumers, in the end, we only pay premium prices to eat presumably healthier and safer products, that involve more “sustainable, eco-friendly inputs” than in pesticide and fertiliser-treated conventional foods.

Food sustainability, then, must expand to take into account issues of social justice, whether it is fair wages for farm labourers, profitable income for farmers, the right of communities to maintain sovereignty over what they grow and eat, or the consumer’s right to healthy and affordable food. This cannot result from conscious consumers alone—what we need is a systemic change at the state level.

Have producers ever experienced a just supply chain?

Beyond the injustices faced by labourers, farmers themselves—particularly marginal farmers, who make up 86% of India’s agricultural workforce—receive unsatisfactory returns for their labour. Volatile market prices, high input costs and low profits, and exploitative middlemen combine to place a heavy burden on farmers.

Such injustices have real-world consequences. In 2019, the National Crime Records Bureau (NCRB) reported that 10,281 farmers committed suicide, as did 32,559 daily wage workers. These are not mere numbers; each death represents a person who suffered the consequences of an unjust food system. And so, they must be accounted for in our conversations on food sustainability [2].

But, what leads to such unfair conditions for farmers in the first place? The answer, in part, lies in  India’s agro-food supply chains which have evolved to be highly unsustainable and unjust for farmers.

Existing food supply chains largely rely on the APMC (Agricultural Produce Market Committee) Act. It states that sales or purchases of agricultural commodities should be carried out in government wholesale markets—or mandis—where farmers have to pay taxes, fees, and commissions in exchange for a place to sell their produce. However, not all states strictly implement the Act and only about a quarter of all agricultural trades and sales occur in these mandis. The remaining three quarters occur through private deals with middlemen or through contract farming.

Many see APMC mandis as obstructive structures that hold a monopoly over agricultural trade at the expense of farmers who do not have a choice over where and who they sell their produce to. On the other hand, farmers are also often exploited by commision agents—who act as the middlemen between farmers and retailers—as they charge high fees that force farmers to take high-interest informal loans from the agents themselves.

To seemingly address this, on September 14, 2020, the Government of India passed three controversial Farm Bills in Parliament, with a vision of allowing farmers to directly sell to private players without the intrusion of middlemen. Yet, in spite of their stated goals to improve farmer incomes, the Bills have still been criticised as serving corporate interests instead. Critics of the bills claim that corporations can hold disproportionate power over farmers, who have no system-induced bargaining power to demand fair prices for their products. This concentration of food trade in corporate hands will prove disastrous for marginal farmers who cannot dictate what they grow, or are unable to compete with large scale, commercially oriented farm enterprises [3].

Farmers clearly lost out in pre-existing supply chains, but these new reforms don’t seem to offer fuller solutions for socio-economic justice either. As Aga notes, “We have this whole idea that middlemen [in existing food supply chains] are bad; but they play important roles. They grade and sort the supplies since farmers often don’t do that, and are also at times involved in processing. At the same time, we need to make sure that the system is fair and just to farmers and consumers.”

This would not simply mean a return to exploitative relations that marked the pre-existing supply chain systems. We need reforms that will involve the state in providing transparent procurement systems for agricultural commodities that are fair and profitable for farmers. We must keep these nuances of our food systems in mind when we begin to think of solutions for food sustainability, or else we fail to imagine a sustainable future for everyone.

Thinking from the ground up

While many accounts of unsustainable food practices point to our shifting diets, the main problem lies in the uneven power structures that determine our options for food and the injustices faced by many marginal farmers and labourers. We need to dig deeper and ask why such concentrated and high-efficiency models of the food supply chain have become preferable in the first place.

As citizens, we need to demand that the state prioritise sustainable crop cultivation and food distribution, rather than unsustainable methods. We must question: why are unsustainable practices like input-heavy industrialised farming more accessible than less resource-intensive forms of agriculture like organic farming? What can the state do to reward sustainable food practices over unsustainable ones? How can agricultural policies address the injustices faced by farmers and labourers? It is crucial that state policies prioritise the livelihoods of rural farmers and ensure that there are opportunities for farmers to engage in environmentally sustainable, bio-diverse, and profitable agriculture to ensure food security and sustainability in the long run. The challenge is in getting the state to listen.

1/n From the Vault [THREAD]

Exactly two years ago, in Nov. 2018, there was a #farmersmarch organised under the banner of Nation for Farmers. We caught up with @PSainath_org to understand the aim of the march, why it was important and what it meant for different citizens. pic.twitter.com/D6nWBRc4iC

Rather than buying into globalised diets of cereals, sugars, and oils that are sourced from few specific locations in India or abroad, switching to a decentralised supply chain that can be both environmentally sustainable and supportive of independent, local farmers can be of use. For this, we can take guidance from communities indigenous to India who have long practised ‘sustainable’ methods of procurement and distribution of food, but are increasingly threatened by intrusive policies of the state working on a neoliberal model of development.

About the Sponsor: Pristine Organics was founded to bridge the gap in nutrition and reconnect us to foods that sustain and nourish us. Our products come from ecologically mindful farming and processing methods that are healthier, both for us and our planet.

[2] In Shadow Space: Suicides and the Predicament of Rural India, A.R. Vasavi further paints an incredibly heartbreaking story of farmer suicides in rural India, showing the many social, political, and economic factors that lead to such high numbers.