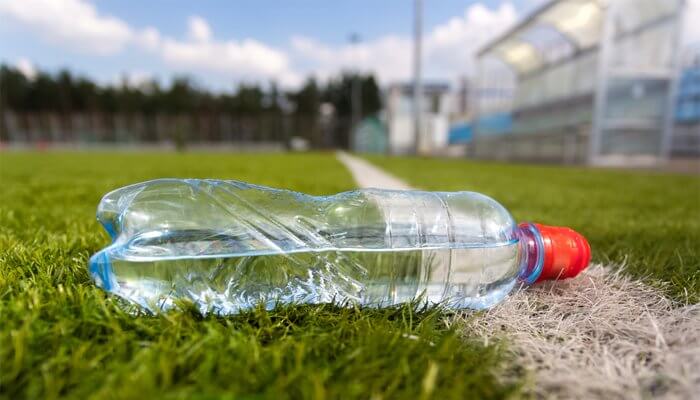 Plastic has become an integral part of our life. So integral, that we seldom take notice of the amount we consume. From toothbrushes to mobile phones, tiffin boxes to water bottles, imagining a life without plastic is almost impossible.

On average, each Indian consumes around 11 kilograms of plastic a year. Just to put things into perspective, a single plastic bag weighs a mere 5.5 grams. Although 11 kilograms per person doesn’t sound like much, India’s sheer population compounds the effect. Even though 60% of our plastic is recycled, we have over 9,400,000 kgs of plastic waste which is either landfilled or ends up polluting our streams and groundwater sources. Some of these items might not decompose at all or can take up to 450 years to break down.

Although the present numbers are jarring, what is most worrisome is how our consumption has risen. From 1996 to 2017, plastic use has increased by over 29000%! This isn’t necessarily a bad thing, especially for a developing economy that had to take advantage of the innovations in manufacturing. However, in the struggle for economic growth, we cannot afford to be oblivious to the effects our actions have on the environment.

How and Why do We Need the Private Sector?

Recycling plastic is a complicated task. This is because plastics are of various types, and not all of them are recyclable. Even amongst the ones that are, there are certain restrictions on what these products can be recycled into.

Special labels have been made to help consumers like you and me identify the type of plastic and encourage informed segregation. However, this requires regular monitoring for effective implementation. Fortunately, the Plastic Management Waste Rules, 2016, amended in 2018, states that state pollution control boards and pollution control committees must send details on the type and quantity of plastic waste, its collection, segregation and disposal across cities, towns and villages to the Central Pollution Control Board (CPCB). However, according to Bloomberg Quint, 10 states—Daman & Diu, Goa, Jharkhand, Kerala, Lakshadweep, Mizoram, Rajasthan, Telangana, Uttarakhand and West Bengal— have failed to file their annual data for 2016-17 and 2017-18.

The sheer size of the Indian plastic market, coupled with the complexity of plastic recycling and the relative ineffectiveness of the public sector has stymied our progression towards a more sustainable economy; a problem that could be solved with greater involvement of the private sector. But, how?

Let’s break down the impact a private sector could have by taking the example of the sports industry.

Sports in India is arguably one of the most effective platforms for change due to its widespread distribution— be it sporting goods or even viewership. Moreover, Sanjay Gupta, Managing Director, Star India, envisions the sports business to become a $10 billion industry in the next 5 to 7 years.

The vast financial capital along with the massive reach of the sports industry significantly increases the influence sports can have on society. To fight plastic pollution in the country, this needs to be capitalised upon and oriented towards promoting informed plastic production, segregation, collection and recycling. Fortunately, the sports industry in India is already doing its bit and can be a great example for others.

In a bid to increase awareness about marine plastic, Adidas and Parley for the Oceans jointly organised an event—called ‘Run for the Oceans’— in which Adidas donated 1 USD to the Parley Ocean School for every kilometre that was run. These funds, in turn, were utilised to assist youth in making long-term behavioural changes to minimize their use of plastic. Globally, over 2.2 million people had participated in the event covering a total of 12.5 million km. In the 2018 edition, close to 7,500 runners ran about 1,22,000 km in India.

Rain and human grit on full display. Nature and our love for oceans at its best.@adidas @adidasrunning and @parleyxxx – Thank you for making our beach “Blue”. pic.twitter.com/qbFXLkk9NE

This and other such events drive behavioural changes in consumer demand. A campaign like Run for the Oceans not only increases awareness about plastic pollution but also drives consumer demand towards buying sustainable goods such as recycled shoes and other sportswear.

In 2017-18, the sports goods exported from India were valued at Rs 1,079 cr. Owing to their reach and size in the economy, sports goods manufacturers play a pivotal role in introducing recycled products into the market and encourage its use through their brand value.

In India, Alcis Sports—a sports apparel company—is using recycled polyester out of R-PET (Recycled Polyethylene Terephthalate) bottles to make sportswear.  Each t-shirt is made from recycling about eight plastic bottles. Apart from reducing plastic usage, each t-shirt saves close to 27 litres of water, and utilizes 50% less energy to produce and the carbon emissions are lowered by over 54%. Furthermore, in 2015 the Indian Men’s Cricket kit was made out of 100% recycled polyester with close to 15 recycled plastic bottles being recycled to make the jersey and about 18 recycled plastic bottles to create each pant.

Beyond raising awareness, Adidas is actively investing in innovations to influence the environmental footprint of its products through the choice of materials used and how the products are manufactured. According to Stefan Pursche, Senior Manager Media Relations at Adidas, “…only recycled polyester will be used in every [Adidas] product and on every application where a solution exists” from 2024 onwards. Since 2018, the company has been sourcing cotton solely through the Better Cotton Initiative (BCI)—a global consortium of fashion companies in partnership with the World Wide Fund (WWF) that aims to reduce the use of pesticides, promotes efficient water use, crop rotation and fair working conditions.

The idea of increasing private sector involvement within plastic recycling is not something new. In fact, since 2016, India’s Plastic Waste Management (PWD) Rules mandated Extended Producer Responsibility (EPR) for all plastic producers, importers and brand owners (PIBOs) to collect back the plastic introduced into the market. The catch is that most producers do not have to physically collect the product; they just provide financial assistance to Producer Responsibility Organisations (PROs) to collect and process waste on their behalf.

Ideally, this set-up should work. However,e as pointed out by Dinesh Raj Bandela, Richa Agarwal in Down To Earth, “Most PROs meet their targets by purchasing waste from the informal sector—individual ragpickers as well as major aggregators. This will just perpetuate the current system of people disposing unsegregated waste and ragpickers acting as scavengers. But more importantly, it will build an alternate waste management system against the one run by urban local bodies.” Source segregation is a major issue in the implementation of the EPR, and this is where sports can fill the gap.

For instance, stadiums are ideal spots for segregation due to high traffic and consumption, a lot of which is plastic. Moreover, nudging people to segregate in such public places can inculcate a habit to perform the same within their households. For example, in 2018, the eighth match of IPL XI was held in Chinnaswamy Stadium in Bangalore with the “green protocol” set in place.  This zero-waste concept included separate bins for wet and dry waste along with volunteers who would advise the crowd on waste management and effective source segregation. Non-biodegradable plastics were barred from the stadium while food vendors were asked to serve on areca leaf and/or corn starch plates.

This “green protocol”, undeniably a novel and effective idea, was possible only due to a collaboration between public and private entities—Royal Challengers Bangalore, Bruhat Bengaluru Mahanagara Palike (BBMP) and the Karnataka State Cricket Association (KSCA).

Owing to the sports industry’s distribution network, manufacturing capabilities and influence, it has had a considerable impact and contribution in the fight against plastic pollution in India. The example it has set can and should be followed by various other industries to ensure not only awareness, but effective recycling and collection is done.

India’s struggle against plastic pollution cannot be fought with individuals and the public sector alone; private bodies must come together and align their interests towards sustainable development in both theory and practice, and complement existing policies like EPR.