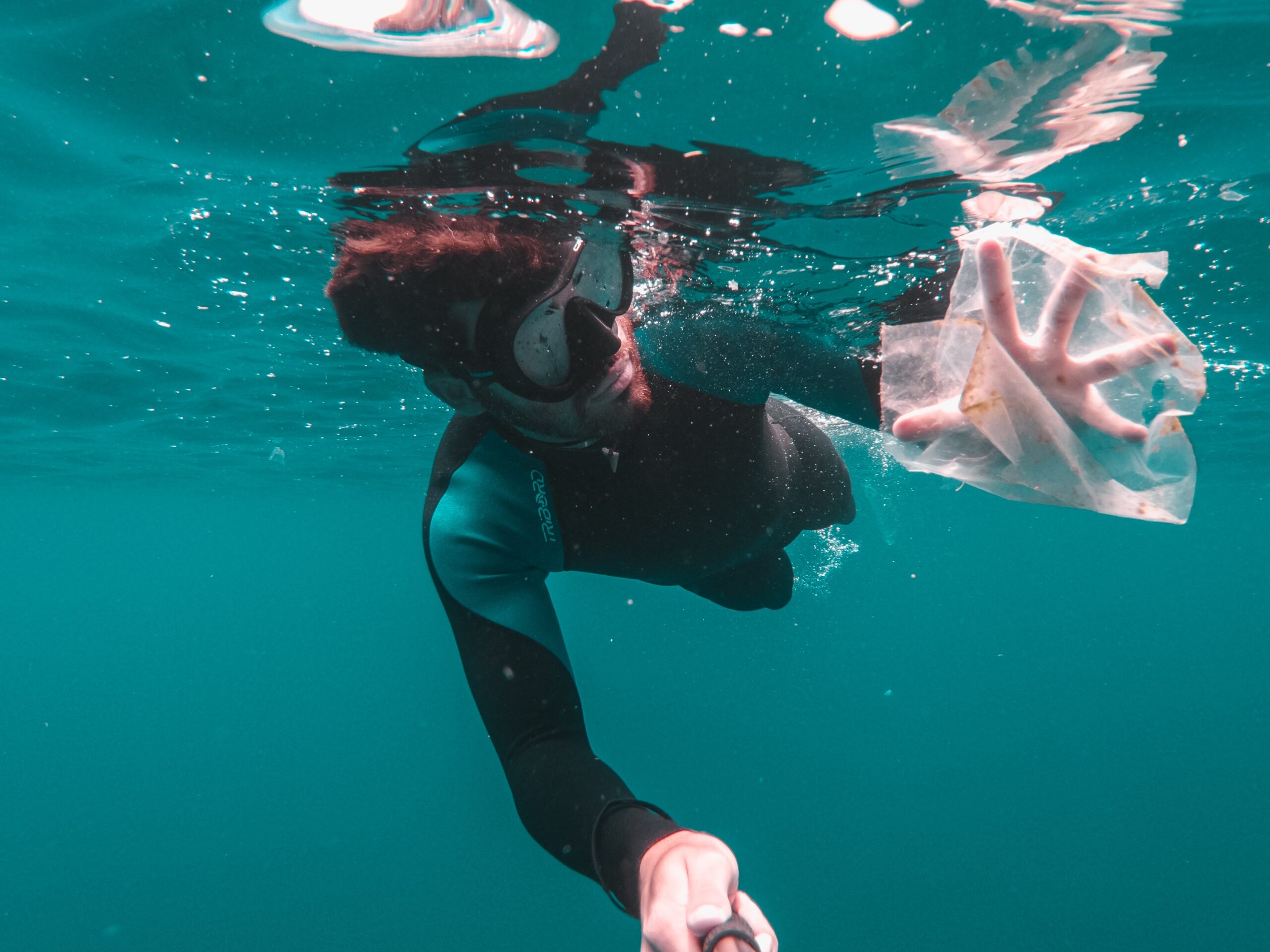 A few weeks ago, I watched the Netflix documentary My Octopus Teacher which follows film producer Craig Foster’s journey as he meticulously tracks a Common Octopus in the ocean for about a year. I watched the underwater videography in awe, thinking of how so much of marine life is still unknown to humans; it is distant, and almost elusive.

And then, I remembered photographer David Liittschwager’s National Geographic photographs from May of 2019. He shot images of water samples that an oceanographer and a fish biologist had collected off Hawaii’s coast for a research project. These striking images showed a drift fish here and a mahi-mahi there, swimming between small pieces of something that is neither distant nor elusive, and yet finds itself in our mysterious oceans—plastic.

Worse still, these were microplastics, plastics that with a diameter smaller than 5 millimetres—about the size of a sesame seed. Now, documentation shows that newborn fish are mistaking these tiny pieces of plastic to be food, a mistake that can cost them their life. This could ripple into lower populations of big fish in the ocean, ultimately collapsing entire food chains. The latest study on this phenomenon from Australia rings warning bells; it suggests that there are nearly 16 million tonnes of microplastics on the ocean floor today. While these microplastics could be a part of the larger plastic waste disintegration taking place in the ocean, there is one unusual suspect for as much as 35% of them: washing synthetic clothes.

How are your clothes the culprit?

Plastic Soup Foundation, a Netherlands-based organisation conducted a study with the Italy-based Institute for Polymers, Composites and Biomaterials, that explained the dangers of synthetic clothes. Upon washing t-shirts from Adidas and Nike, as well as a 100% polyester blouse from Zara, they saw the apparel losing between 125 mg to 307.6 mg of fibres per kg of laundry. Each wash brought the clothes closer to their demise. In response to the study, Mario Westerbos, the director and founder of Plastic Foundation said, “This is what you call fast fashion. It disappears in front of your eyes.”

This was the problem: regular washing machines are not capable of filtering out the microplastics that “leak out” of synthetic clothes when washed. They instead drain the tiny pieces of plastic into the wastewater generated, which eventually reach water bodies and oceans.

Apart from our washing machines, the gradual break-down of larger plastic waste also creates microplastics in the oceans—a problem that many large apparel companies are trying to solve.

Adidas, in partnership with Parley for the Oceans, has been making shoes from yarns and filaments reclaimed and recycled from marine plastic waste and illegal deep-sea fishing gillnets. Adidas’ first such shoe hit the market in 2016. Up till June 2019, they claim to have prevented almost 3,000 tons of plastic trash from destroying the oceans by making such shoes and apparel. By 2024, they have bigger plans: to use only recycled polyester in every one of their products.

Decathlon jumped on this bandwagon in 2018. They introduced the Mountain Hiking 100 Fleece, a jacket made out of 75% recycled materials, or 9 plastic bottles. With this, they claim to “offer a second life” to about 39 million plastic bottles each year.

But, are there broken links in this seemingly perfect circular economy?

A June, 2020 report by the Biomimicry Institute suggests that this plastic-to-textile approach doesn’t cut much ice if there is no natural decomposition of the final product. “Man-made material loops always, inevitably, leak into the environment,” the report states. After all, even recycled polyester clothes and shoes will end up in the landfills or the oceans once the consumer is done using it. Washing them in the machine too will release similar microfibers as their virgin counterparts—or at best, fewer—but will not diminish the problem completely, as experts have opined.

Maya Sharma*, who works at an organization that supports innovation in sustainable fashion, resonates with this. “Such plastic-to-textile recycling actually has the threat of communicating the message that perhaps plastic is not all that bad, since people think ‘this can be recycled anyway’.”

Instead, what the fashion industry needs is what Maya refers to as “textile-to-textile recycling” which involves chemically recycling discarded textile waste to make pulp, and then, to develop a yarn, ready to be woven into a shirt, as good as new. Pradipti Jayaram, a managing partner in Kalyanram Chamayam Costume Rentals and Sale, a rental chain based in Kerala, experimented with such recycling. “Our rental clothes are predominantly synthetics. After their wear and tear, we didn’t know how to dispose of them,” she says. “While initially the Cochin Corporation was handling it, I was worried about the clothes’ ecological lifecycle after it was out of my [company’s] door.” Jayaram then found out about Plan@Earth, an organisation based in Cochin that took all the company’s cloth cuts and old fabrics, and recycled them into different products like bags, bedsheets, and wall hangings.

When I first met these women in #Rajasthan in 2015 they had hardly any education, no personal income nor mobility. Now they can produce bags from discarded textiles + earn an income + travel & their bags are replacing plastic bags in #Udaipur! #noplasticbag #WomensEmpowerment pic.twitter.com/OBKXG0VJkK

While recycling synthetic clothes is one way to deal with this crisis, another solution is to shift to different alternatives altogether. Natural, compostable fibres are one such alternative. The Biomimicry report presses on moving towards using cotton and wool in textiles, as well as cellulose-based fibers from agricultural waste, and even fibers produced through fermentation. Cotton, of course, has to be sustainably sourced, since reports now reveal the negative environmental impacts of cultivating it, including the pressure it places on water resources. Bigger companies like Decathlon have made commitments towards this end; they claim to have sourced 95% sustainable cotton (organic or recycled cotton, or product sourced from the global not-for-profit Better Cotton Initiative)  in 2019, which was 25% more than in 2018.

Can We Wash Our Synthetics Better?

If washing synthetic clothes causes so many problems, why can’t we design washing machines differently, so that they’re more efficient when it comes to filtering? A study by Napper et al. advocated for fibre-catching devices in washing machines—similar to lint catching tools—that could reduce as much as 78% of such particles from ending up in the ocean. France has led the way by being the first country to announce that from 2025 onwards, all new washing machines will require a filter to capture these microplastics.

Did you know many of our clothes are made of plastic? 9.4 trillion plastic fibres are released from washes every week in the UK.

Help #StopOceanThreads! Washing machine filters could catch these fibres before they reach our ocean. Sign our petition: https://t.co/tTFLfqKFpJ pic.twitter.com/2Oil7AAutR

Of course, while this can deter microplastics from reaching the ocean, those ‘caught’ by a washing machine will have to be disposed of somewhere, most likely, in landfills. “But this is still a better alternative than the oceans where fish can eat these tiny pieces of plastic,” comments Aravindhan Nagarajan, a faculty member at Azim Premji University’s School of Development. “But I say that on the premise that the garbage in landfills gets treated.”

Jayaram discusses other alternatives too. “To keep clothes clean in our rental business, we use a tumble drier. This heats the products to a very high temperature and kills the bacteria—essentially working as a UV ray. Since washed away sequins too can be harmful to the environment, we glue most of those that fall off back to the fabric. This not only ensures that our products last longer, but it also reduces our ecological footprint.”

Plastic, the root of the problem

But, the larger problem remains undeterred. “At the heart of it, this is a plastic problem; it’s not a problem that can be rectified with more efficient washing machines, or by creating apparels out of recycled plastic,” says Maya. “Large plastic producing companies need to stop offloading this onus of responsibly dealing with the effects plastic to other industries, including fashion.”

The microplastic crisis calls for a much-needed look at the solutions offered throughout the supply chain, and not just for the final product. Such “plastic leakage” needs to be acknowledged, measured, and targeted. In this light, the Plastic Leak Project was developed to bring together key sectors and actors—including apparel companies like Adidas and Decathalon—to build consensus on a shared method to calculate plastic leakage at various levels of production of their product.

“This is really the first step to deal with the problem, we need to assess how much microplastic  India is generating—from clothes, or the break-down of other larger plastic wastes, or microbeads in the shower gels. Only then can we prioritize where we should be regulating it,” says Nagarajan. “But, at the end of the day, the larger plastic that we generate and dump will always be something we have to take into consideration.”