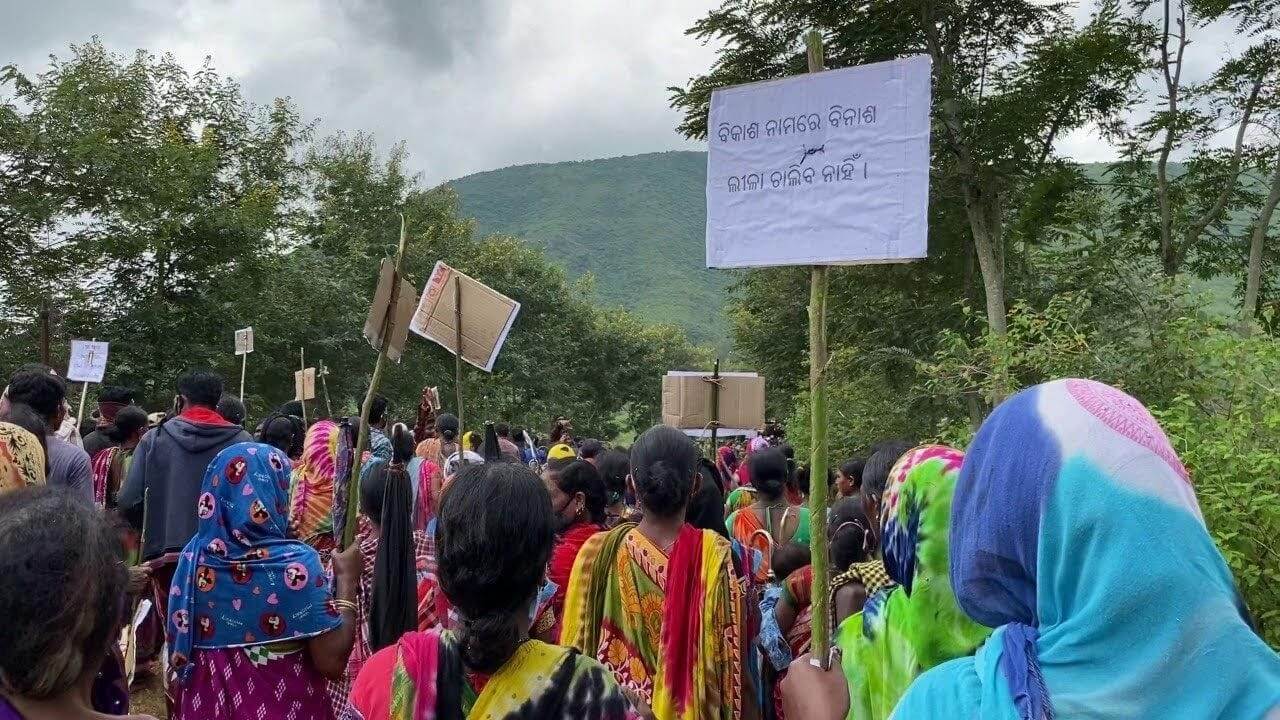 Is it possible to remove the soul of a person and ask him to live? Asking us to give up Mali Hill for mining is like asking us to live without souls.

In 2003, Hindalco Industries received a 20-year mining lease and environmental clearance from the Odisha government to mine 6 lakh tonnes of bauxite in Mali Parbat annually. The project proposed to base its mining operations in the Mali Hill area, spanning 268.110 hectares of land and the home of the Kondh, Paraja, and Gadaba tribes spread across 44 villages in this region.

In response to the project, thousands of residents voiced Arjun Kirsani’s concerns and began resisting the mining, which would not only impact the water requirements of the farming families but would also hinder the local economy of Maliparbat. Come March 10, 2022, a hearing will be conducted in the Odisha High Court to decide if the Environmental Clearance will be granted, which will determine the renewal of the Hindalco mining lease

Maliparbat is a bauxite-abundant hill located in Koraput, Odisha and is a source of life for the Adivasi communities living in the region. According to the residents of the Koraput region, thirty-six perennial streams flow through Mali Hill and nourish the Kolab river. Furthermore, the Kolab is the lifeline of the district as locals commonly use the water for irrigation and power generation. It is a perennial water source that also enables the cultivation and foraging of vegetables that are later sold in the Kundalghat local market. Recognizing the importance of this land, the Adivasi communities began organising in 2003 to oppose the mine and assert their constitutional rights.

This resistance was matched by the creation of The Maliparbat Surakhya Samiti (MPSS) in 2005, which enabled locals to organize and oppose the proposed mining project. Currently, 41 of the 44 villages in the region back the MPSS and resist the mine, stating the clear impact it will have on their livelihoods and the environment of tribes in the region. Since 2003, 12,000 people have been affected due to the conflict caused by mining.

In retaliation, the locals resisted the construction of a road to transport the bauxite from Mali Hill to Rorkee and Sambalpur.  This was coupled with the actions of MPSS in protecting their forests and livelihoods, eventually leading to mining operations being shut down in 2010.

In 2020 however, Hindalco initiated the renewal of environmental clearance for the bauxite mining project and in April 2021, the Ministry of Environment Forest and Climate Change permitted a public hearing for environmental clearance on the project. The State Pollution Control Board organized the public hearing in late September of 2022, which was then promptly disrupted by protesting locals. When the public hearing finally took place, it was held in the presence of 30 platoons of police. Over 30 people opposing the project, including a 16-year old minor, were taken into preventive custody. This opposition culminated with the MPSS approaching the Odisha High Court with a plea to redo the public hearing.

Local Adivasi leader of MPSS, Arjun Kirsani, shared, “the public hearings in September and November felt more like police-sabhas rather than public sabhas. Rather than the presence of local people, we saw the overwhelming presence of 4000 policemen”.

It is important to note that women who stood in solidarity with this movement were also met with violence and misdemeanour, but were not swayed.

We are not carrying pistols, lathis, or axes. Why are we not being permitted to participate in the public hearing? We are dependent on the waters of the sacred Maliparbat for our agriculture and livelihoods. If we lose all of this, how will we survive? How will the future generations survive? Why would we give up our lives and community for mining? We will not give up our mountains.

-Laxmi Khillo, Leader of the MPSS

Land Rights: When Ideas of Development Contradict the Law of the Land

The Koraput district is a fifth-schedule region with a predominant Adivasi population and falls under the Provisions of the Panchayat (Extension to the Scheduled Areas ) Act, 1996. PESA Act guarantees regulatory autonomy to fifth schedule areas under the Constitution. It is therefore a crucial misstep that while the EIA report delves into the impacts of the mining, the fact of the area being a fifth schedule area has no mention in these reports.

Additionally, the PESA Act empowers Gram Sabhas and Panchayats to be involved in the approval of developmental plans in their area. This includes the recommendation of Gram Sabhas and Panchayats prior to the granting of a mining lease. Moreover, any land acquisition and the subsequent resettlement of affected families in the scheduled area is subject to mandatory consultation with these institutions.

Subsequently, in order to support the livelihoods of over 150 million forest-dependent people, the Forest Rights Act was enacted in 2006. Much like the PESA, it also seeks to increase the autonomy of local communities.  The law also vests a number of rights over forest lands with forest-dependent Scheduled Tribes (STs) and Other Traditional Forest Dwellers (OTFDs).

Section 3 of the Forest Rights Act recognises the rights of forest-dwelling communities to access, collectively manage, protect, and conserve forests that they have been traditionally using. Once forest rights are recognised, forests cannot be diverted for development projects without obtaining a No Objectification Certificate (NOC) from the respective CFR Gram Sabha.

This is particularly important in Maliparbat, where locals depend on the medicinal herbs for healthcare and foraging for nutrition. Moreover, Laxmi Khillo and Arjun Kirsani also elucidated the dependence of the local community on medicinal plants in the mountains. This dependence is exacerbated by the lack of accessibility to public healthcare. Locals and activists shared that the public hearing was conducted without the presence and consent of the stakeholders directly impacted by the mining project, thereby failing to adhere to PESA.

The public hearings by the State Pollution Control Board should have been done in collaboration with the gram sabha and panchayats. The public hearings that took place in Koraput failed to adhere to the PESA Act. Kirsani said “We went to the public hearing to seek justice, but in retaliation, we got slapped with false charges and threatened with lathis and guns. Why are governments responding to their own people in this manner? Where do we Dalit and Adivasi people go in search of justice? How do we reclaim the right to our land cared for by our ancestors ?”

It is also crucial to understand that Maliparbat isn’t just important to the human population – the dense tree cover houses a rich Pangolin population and over 102 species of birds that would be detrimentally impacted by the mining project.  The Pangolin is an endangered species under the International Union for Conservation of Nature and Natural Resources (IUCN) and is protected under schedule 1 of the Wildlife Protection Act.  The impacts of the wash-off from mining waste, noise levels, water contamination and drilling will likely impact the habitat of the pangolin and other species causing habitat destruction and biodiversity loss.

According to activists and leaders, if PESA, FRA, and LARR were implemented, the bauxite mining project would have been shut down.

Goldman Environmental Prize winner and environmental activist Prafulla Samantara said that he wrote to several governmental authorities requesting them not to have the public hearing without the involvement of the local people, as it was undemocratic and in violation of the Constitution. He did not receive comments or support from the government leaders in the region. According to Samantara, the government of Odisha has the right to withdraw the mining lease because of the violation of the fifth schedule.

Samantara asserted that everything needs to be done in balance, including bauxite mining, stating that “natural resources should not get exhausted for the sake of our luxury. The scientific truth sides with the people’s demands of protecting the land”. He also mentioned the urgent need to anchor the discourse around the climate crisis to the needs and consent of local communities. Even when project clearances involve local communities, the lack of utilization of Adivasi languages further hinders the accessibility of these processes. It also hints at a larger systematic issue of exclusionary democratic practices.

In short, Bauxite mining means development and economic growth for mining companies and the government and for the forest-dwelling communities and tribes, mining implies the destruction of habitat and loss of livelihood. Therefore, it is clear that laws should be implemented in a manner that strikes a balance between development and people’s relationship with the land and natural resources.

Laws like PESA, EIA, and LARR were enacted to protect individual and community rights from outright abuse due to developmental and profit-driven projects. While there is a discussion to be had about the contents of the law, the government turning a blind eye to even basic protections is a concerning trajectory.

Adivasi leaders and local activists must be given a seat at the decision-making table in shaping development projects to ensure that policy decisions are climate and community-friendly.