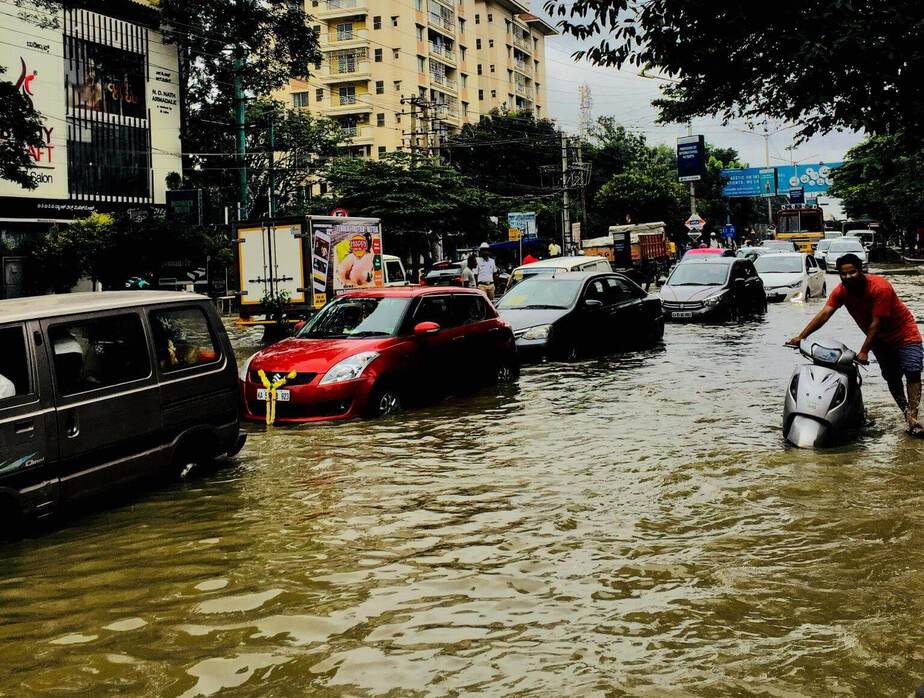 “It only has to rain for a short while for the city to get completely submerged. This creates a lot of problem in commute for me, and I can’t even imagine what it is like for someone from a lower-income background”, says Saket, a 24-year-old resident of Bangalore. As an urban centre, Bengaluru attracts a vast number of people for education and work every year. Even as a burgeoning population is considered indicative of economic prosperity, it also puts the city at a risk of coming to a complete standstill.

The Meteorological Centre, Bengaluru found that there was a 40% to 47% increase in rainfall in the June to September period this year. Heavy rains and flooding are not unusual in Bangalore. But, this propensity of flooding is not due to natural causes; it is because of man-made pressures on the city. Researchers from the Indian Institute of Science found that in urban areas, floods in Bengaluru are caused by inefficient waste disposal and drainage systems, poor city planning and rapid urbanization (which, in turn, affects the interconnectivity between the lakes in Bangalore).

The popularity of Bengaluru as an IT Hub has laid the ground for rapid urbanization, which is understandably a huge hurdle to maintaining an ecological balance. Urban constructions built to accommodate newer businesses and employees lead to “the expansion of impervious area, reduced surface infiltration and reduced recharged groundwater”. In turn, this causes water ─ that could have otherwise been absorbed into the groundwater table ─ to become run-off that stagnates in low-lying or congested areas. The impact of this floodwater is well-known; apart from causing economic damage to property, decreased communication and increased compromises to sanitation, floods bring potentially fatal diseases. “There has been a massive increase in dengue, cholera, typhoid and other protozoal diseases”, says Dr Praveen Bopaiah, a paediatrician in the city.

it is clear that residents are immensely impacted by the floods. Yet, government intervention has failed to bring any kind of long-term relief

For instance, on paper, a stormwater drain called Rajakaluve has been designed to drain excess groundwater from impervious surfaces. This drain connects Bellandur lake from the city market side. But the drain has been reduced by 50% of its original width of 60 meters! Additionally, the concretisation of these drains and their surroundings, have increased the city’s vulnerability to flood.

Following the destructive flooding Chennai witnessed in 2015, a standing committee submitted a report to the Rajya Sabha, analysing the events behind the flood. The standing committee failed to sufficiently analyse human responsibility behind the event and made only token claims. To quote the committee, “Ministry of Urban Development (MoUD) had issued an Action Plan to all States and Union territories for ‘Flood Proofing of Cities/ Towns’ well in advance i.e., on 3rd September, 2013 itself” it was yet to “play a proactive role in ensuring its implementation in terms of urban planning and development especially of metro cities”.

The floods in Bangalore have proven that little action has taken place in the two years hence. The Indian Express notes that “The repeated flooding in Bengaluru is similar to deluges that drowned Chennai in November 2015 and Srinagar in 2014 … all are the result of urban planners giving the short shrift to a fundamental principle of hydrology”. Due to human encroachment on natural ‘sponges’ (like inter-lake networks) which used to absorb the impact of rain, today there is an obstruction to natural water collection, causing stagnation. In this, the standing committee’s half-hearted recommendation that illegal encroachers should be removed is entirely tokenistic, even unrealistic, because any action undertaken would be too late.

The Future for Urban Flooding

Among the recommendations for effective flood control are measures to prevent the concretisation of the stormwater drains and increased vegetation (which allows groundwater recharge).

Additionally, automobile use and factory refuse should be kept in check, because both these enterprises generate heat, resulting in something known as the “heat island effect”. This heat generation and the particulate dust makes an urban area more likely to experience showers, akin to a hot island exclusively experiencing rain. Citizen cognizance would thus go a long way on this front.

But perhaps the most effective method would be by the creation of a “Sponge City”, a concept that the Chinese government also holds in high regard. This seeks to restore the lost hydrological characteristics of a development area through rainwater harvesting. With these interventions and active flood-control monitoring by State agencies, a significant ecological balance can be restored; we finally might have a shot at preventing future disasters that we bring upon ourselves.