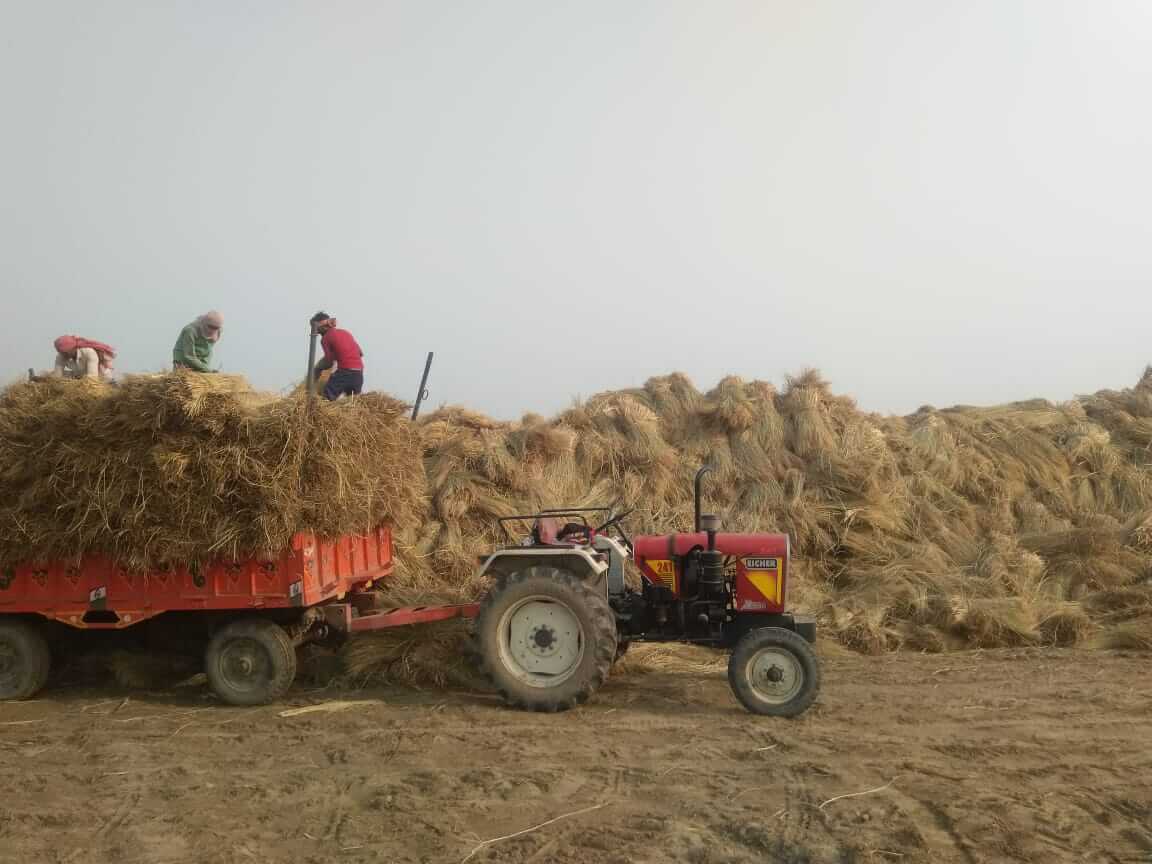 If there is anything that can survive through the toughest of times, it is internet memes. Just as the capital city became smokier, my social media timelines welcomed hilarious memes on the crashing Air Quality Index.

Unfortunately, for meme-enthusiasts like myself, the ones on Delhi’s air pollution have a short lifespan, much like the rest of the reportage around the issue. The news frenzy around air pollution, or “smog”, usually takes off late in October, peaks in the week surrounding Diwali and diminishes thereafter, only to repeat itself the next year.

Residents in the National Capital Region have been asking themselves why this phenomenon is yet to be seriously addressed. Albeit not the largest contributor, an underlying cause of this blanket of smoke is the phenomenon of stubble burning.

In late October, farmers commonly resort to burning the agricultural residue, known as stubble, of the Kharif rice before sowing the Rabi season’s wheat. These angry red dots on maps majorly agglomerate in Punjab and Haryana and are scattered across Himachal Pradesh and the outskirts of Delhi. As of last week, Punjab had reported over 74,000 occurrences of fires, making this year the highest since 2016.

Thermal anomalies observed across Northern India in the last one week. These are primarily stubble-burning crop fire incidents in #Punjab. pic.twitter.com/0tQIrXrU0G

In the face of this annual occurrence, solutions have been in the works for a few years now. Some are still being experimented with, while others are being scaled up — the latest being the Indian Agricultural Research Institute (IARI) Pusa’s “Decomposer Capsules”. Before exploring these solutions, a basic question needs answering: why do farmers resort to stubble burning in the first place?

Between 1997 and 2002, Punjab rolled out a policy that allowed for the free use of electricity on farms. This boon turned to a curse when motor pumps allowed for unlimited amounts of water to be drawn from tubewells, which in turn caused groundwater levels to plummet. As of 2017, most of Punjab’s groundwater was categorised as “over-exploited”.

The Punjab Preservation of Subsoil Water Act, 2009 attempted to change this situation. The Act banned farmers in Punjab from sowing paddy in nurseries before the 10th of May every year. This would allow the transplantation of paddy only in the later months of June, which was in time for the monsoon season. This way, irrigation could be rain-fed, instead of using groundwater.

While the 2009 legislation led to an increase in groundwater tables in the years post-2009, it induced another problem. Delaying the sowing of paddy resulted in its delayed harvest, which left farmers with little time to clear their fields for sowing wheat.

How did these farmers prepare their fields in time? By burning the stubble.

There are more factors at play. Jitender Yadav, a farmer from Jhuljhuli village on the periphery of New Delhi points towards one. “As opposed to the manual harvesting done in Delhi, most of the harvesting in Punjab is mechanised, since land holdings are much larger.” More than half of the landholdings are between 2 to 10 hectares in Punjab, while in Delhi, 55 percent of landholdings fall under one acre. “A combine harvester leaves significant agricultural residue post-harvest, which can only be efficiently dealt with by burning,” Jitender continues.

In response, machines like Happy Seeders — a tractor-mounted machine that cuts and lifts stubble and spreads it on the fields as mulch, leaving nothing for burning —are now available for the on-field management of agricultural residue. But, the hole that they burn in farmers’ pockets is one of its sharpest critiques. Buying a Happy Seeder costs over one lakh rupees, and renting it can cost ₹4000/acre.

Searching for Gold in the Stubble

In October, the Punjab government announced a full waiver on renting Happy Seeders for small and marginal farmers. Yet, there is a larger question that lingers: can stubble burning be prevented by methods and technologies wherein the economic burden does not fall on farmers?

In Jhuljhuli, Jitender and his neighbours have been using a cost-effective method for about 15 years. Here, since most of the harvesting is manually driven, the leftover paddy stubble is collected at common points. It is then shredded and sold in the market as fodder for cattle. “There are two young men who migrated from Bihar and have been doing this business. They started with collecting stubble in about 60 acres 15 years ago, and today they cover about 600 to 700 acres,” says Jitender.

“The village has been able to create a revenue-sharing model where the contractor who collects the stubble pays the farmer ₹2000 to ₹4000 upon selling 1 acre-worth of stubble,” says Paras Tyagi, a researcher and co-founder of NGO CYCLE.

Jitender also experimented with the new ₹5 Decomposer Capsule developed by IARI which is being lauded by Arvind Kejriwal as a solution to the stubble burning. Composed of a combination of microbes that hastens the process of decomposition in plants, it is supposed to be mixed with water and sprayed over the fields. While successful cases of the capsule have been documented in north-west Delhi’s Hiranki, Jitender’s experience with it has been unimpressive.

“We heard about the tablet very late — when it was almost time to sow the next crop. So, we sprayed the mixture, but could not wait for 20 days for the stubble to decompose, because of which we began sowing the seeds. Now, it’s difficult to assess the capsule’s impact, since we already plowed the field after spraying the capsule mixture.” While Jitender might see better results in the next agricultural cycle, his experience indicates the gaps of awareness, distribution, and procurement that exist with IARI’s decomposer as a solution.

Using stubble as a raw material

In the meanwhile, Tyagi and farmers in Jhuljhuli and Nangal Thakran in North-West Delhi are also experimenting with creating manure out of the stubble. Just last week, in collaboration with Prapt Organics, farmers sprinkled a combination of two powders developed by the brand — a wet-waste composter and a leaf and branch composter — over 100 kgs of shredded stubble.

A tarpaulin is used to cover the stubble, thereby allowing for anaerobic decomposition, as shown in the picture below. 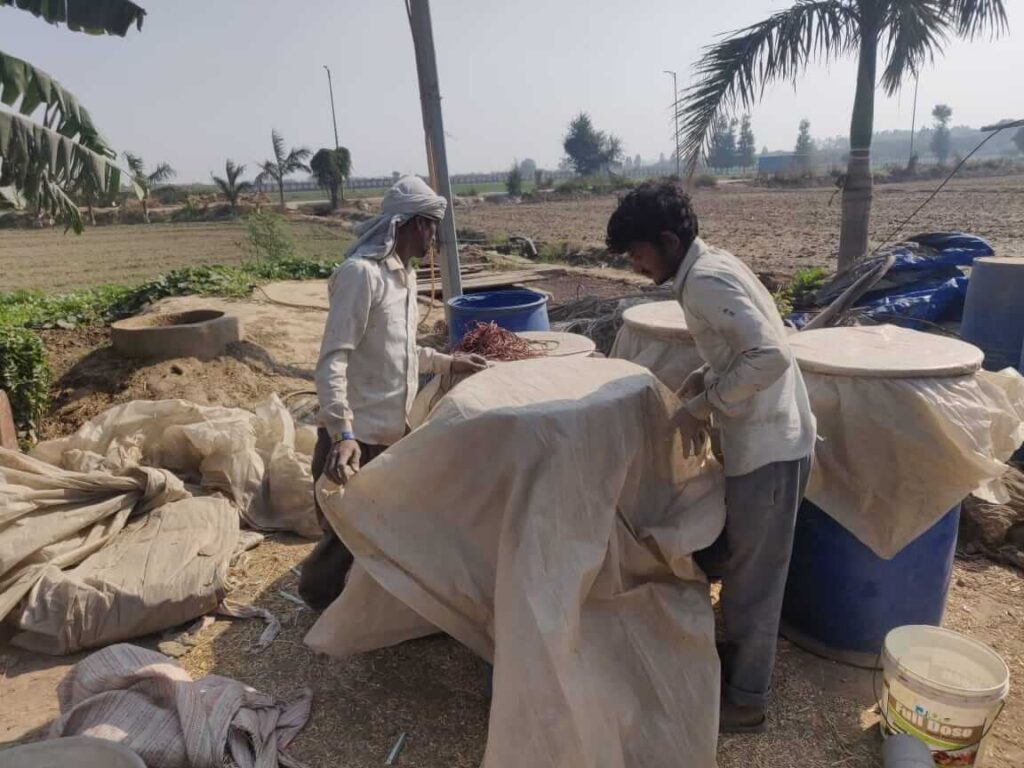 “We will see the results in another 15 days, after which the formed manure will be tested for levels of potassium, magnesium, etc.” explains T.N Sridharan, Managing Partner at Prapt Organics. For a farmer adopting this method, the cost will be minimal. “1 kg of these powders together can be mixed with 180 kgs of cut stubble. Each kilogram of stubble that is being converted to manure will cost the farmer roughly ₹2,” calculates Sridharan.

Scaling this manure-making process in areas where stubble burning is rampant might be challenging. “Even with minimal costs, the challenge is to convince farmers to shift to such initiatives. After all, burning it is free,” says Tyagi.

Tarun Jami, the founder of GreenJams reminds me that besides stubble, “farmers also burn the straw remaining post-mechanised harvesting”. Tarun is using straw and stubble as raw materials for making building blocks that are substitutes for fly-ash red brick. They pay farmers ~₹600 per bigha (roughly 1/5th an acre), from which five to six quintals of straw and stubble are collected. “Agricultural residue such as straw, bagasse, corn stock, etc. can account for up to 60 percent of an Agrocrete block. Not only do these have better thermal insulation, but its usage also lowers the carbon footprint of any construction project,” Tarun adds.

Another such initiative that is creating a circular economy with stubble as a raw material is Fortum. This clean energy company is currently constructing a bio-refinery plant in Assam, where it will use bamboo and convert it into bioethanol, biochemicals, and even electricity. This will be done through fractionation, a process that converts wood into its constituents. “One of the high-value products that will come out of this process is what we are calling ‘bio-coal’ [a carbon neutral fuel for energy]. We will use the bio-coal to power this plant in Assam, making it self-sufficient,” says Faizur Rehman, Head of Bio2x at Fortum. The company is also in discussions with the Haryana Agricultural University to install similar bio-refineries for paddy stubble in Haryana.

This is easier said than done. “When we work on bio-refinery, we are dealing with many players like local governments, other companies, and farmers. This takes time. Moreover, we feel that there has to be a policy framework in place that ensures that farmers benefit from this process too, and there is a long-term, mutual benefit for them,” Rehman adds.

With stubble burning being recognised as a problem, long-term and short-term experiments are slowly gaining traction in offering governments with potential solutions. At the same time, tackling the capital region’s air pollution requires other conversations to occur simultaneously.

While fingers point towards farmers and stubble burning as the primary agents behind the dense layer of smog that descends over the capital every October, their contribution to the total PM2.5 has varied between a minimal 1 percent to a high 42 percent. For the rest of the year, Delhi’s pollution is Delhi’s own making, with a maximum share (41%) of PM 2.5 coming from transport emissions within the city. Farmers are only reacting to what lies in front of them, but it is up to local governments to address the deteriorating air quality on all fronts.