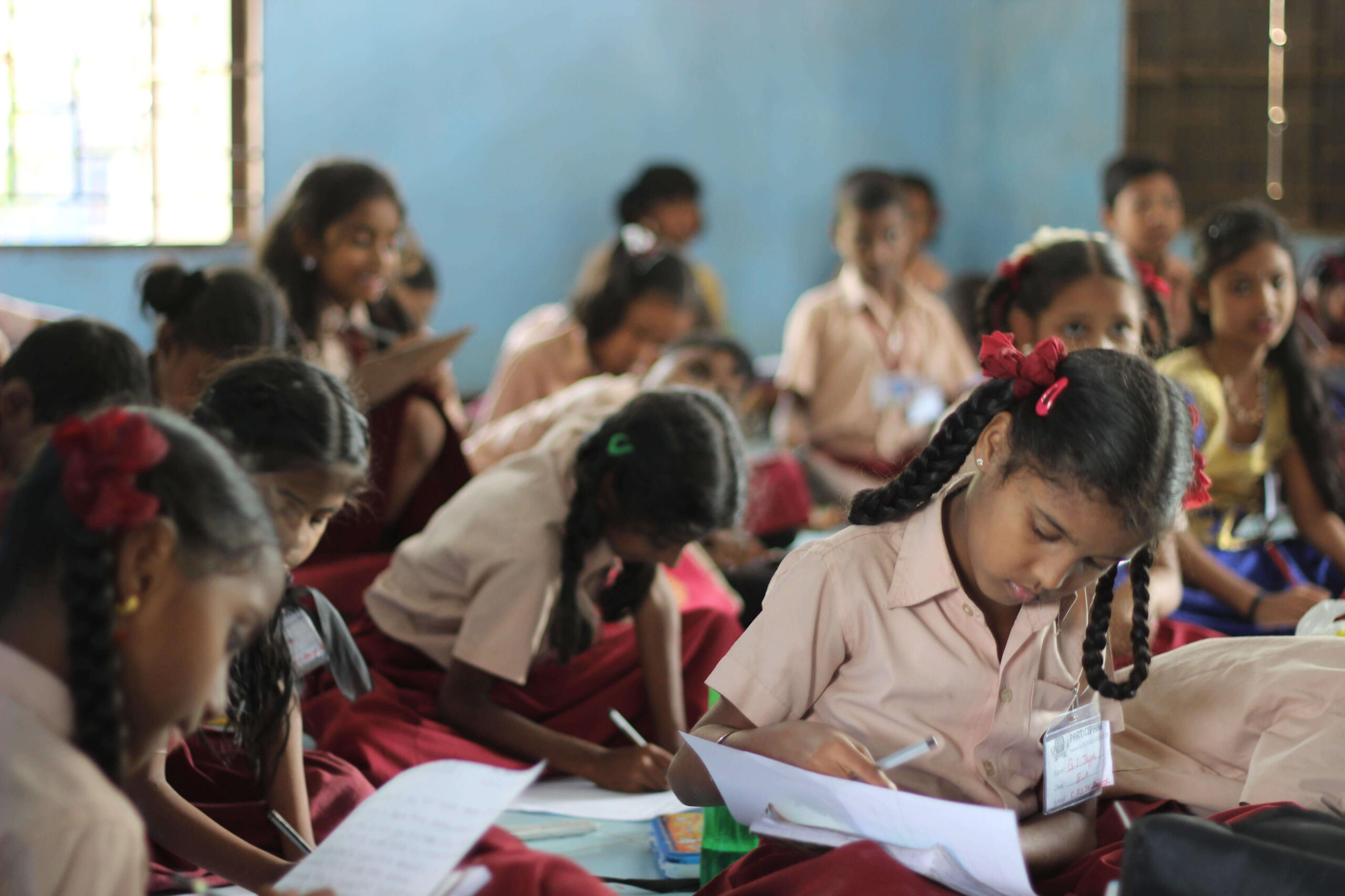 The Tamil Nadu government started the application process under Section 12(1)(c) of the Right to Education Act from the 5th of July 2021, with the last date to apply being extended to August 13th. Section 12(1)(c) obligates unaided (private non-minority) schools to set aside at least 25% of seats at the entry-level (pre-primary or Class I) for children belonging to “weaker sections” and “disadvantaged groups” from their “neighbourhood”. The expenditure under the quota is borne by the state government, typically made in the form of reimbursements towards schools. The provision was intended to bring inclusivity, equity, and representation into classrooms by breaking the nexus between access, quality, and affordability of education.

Tamil Nadu has recently made remarkable strides towards widening the reach of the RTE Act. The seat fill rate (which is the number of students admitted divided by the total number of seats available under the quota) of 11.25% in 2013-14 has healthily increased to 59% in 2019-20. The application process was fully digitised in 2017 and has a dedicated helpline number to assist prospective parents. The broad definition of “disadvantaged group” which includes children of HIV-affected parents and the transgender community is an instance of progressive policymaking. However, these facets cannot explain the gaping holes that lay bare in the statute of Section 12(1)(c) and its implementation.

Bhumi is an NGO that involves celebrities in spreading the word about Section 12(1)(c), along with scouting for eligible parents and helping them apply under the quota. After volunteering with Bhumi, it was apparent that the execution of the admission process of the RTE Act in the state left much to be desired. For starters, Section 8(3) of TN RTE rules 2011 stipulates that parents can select only those unaided schools that fall within a 1-kilometre radius from their residence. “We live in a small village wherein even to buy basic rations, we need to travel at least 5-6 kilometres. How can I find a private school within one kilometre?” asks Kamatchi*, the parent of a three-year-old. Clearly, the provision puts those from disconnected, rural habitations at a serious disadvantage, where finding low-budget private schools in their vicinity is often difficult.

It is noteworthy that the TN RTE rules require government schools to provide necessary arrangements (such as free transportation) if there are none to be found within one kilometre. Kerala’s RTE rules go a step further in making even unaided schools provide free transportation for RTE-eligible children, albeit within the 1-kilometre limit. State rules must be adapted so that a child’s location is not held against her access to education.

Another complication in the admission process is the conditionality that reservation is only available at the entry-level “from which the school starts”. While this may be an unintended consequence of trying to ensure that no school is made to make reservations at Class I in addition to the carry-over from the pre-primary/kindergarten quota, it severely punishes parents who seek admission exclusively for Class I. So, even if a parent finds an eligible school within 1 kilometre that begins at the kindergarten level, they cannot avail the quota because the school is reserved for “LKG parents”.

“Many of the unaided schools around our house begin from Lower Kindergarten. How do I admit my son in Class I now under the quota? Why are we being denied the benefit, simply because I didn’t know about the scheme when my son was LKG-ready?” asks Madan*, who was looking for age-appropriate admission for his five-year-old son. His woes hold credence: a run-through of the Tamil Nadu RTE portal shows that in Chennai for example, only 3 out of the 438 schools listed have their “entry-level” as Class I. While there exists no data to understand how many parents are denied the quota because of this, there are no easy answers to give parents who point out what is an arbitrary restriction of choice for children seeking admission in Class I.

Post-admission grievances include being asked to pay “part” of the tuition fees on the promise of refunding and “miscellaneous” fees for books, uniforms, etc. These are blatant violations of Section 5 of TN RTE rules, which clearly mandate schools to bear all these expenses of children under the RTE quota, pending reimbursement from the state. However, “the government regularly issues notices to schools to employ counsellors for RTE-beneficiary students, but who pays for them?” asks the principal of an unaided school. Besides counsellors, administrators have to account for handling extra classes or ancillary charges like uniforms and books for eligible students.

The result is that while the State is oblivious in its snail-paced disbursements of funds, and unaided schools evade reserved seats by pointing in the government’s direction, the intended beneficiaries end up being the scapegoat. Ravindran* was in for a rude shock when he was informed that his daughter’s status as a beneficiary of Section 12(1)(c) was ending abruptly.

I was happy when I admitted her to LKG under the RTE quota. For five years, everything went well. When she was in Class III, the [private] school was forced to shut down. When I asked the school authorities if she could continue under the scheme in a different school, they explained that it doesn’t work that way. What’s our fault in all this?

Since section 12(1)(c) mandates the schools to provide “free and elementary education” “till its completion”, the on-ground effect is that children have to continue in the same school to claim benefits under the quota. Parents who are forced to migrate, or those whose children are enrolled in schools that only offer up till Class V, or in a school that faces sudden closure, do not have the option of transferring their children to another school under the scheme. Interestingly, although Section 5 of the RTE act gives the right of transfer to children in government schools, it excludes children claiming RTE quota under Section 12(1)(c), despite both sets being recipients of state funding in theory.

In its current form, there are many laudable provisions in the TN RTE rules, such as allowing unaided schools to accommodate children even beyond the 1-kilometre limit, with prior approval from relevant authorities, to fill up the required percentage of seats. The issue, as is often the case, lies in the shortfalls of implementing Section 12(1)(c) and the lack of grievance redressal routes.

Gilber, the project associate at Bhumi, explains how the absence of clarity in grievance redressal has been a persistent roadblock for the success of Section 12(1)(c). “When parents come to us with complaints regarding pressure to pay tuition fees, extracurricular fees etc., we ask them to approach the Chief Education Officer (CEO) of their district. Although there have been few instances where CEOs have warned the concerned schools with punitive action, many parents do not and cannot approach their CEOs for a fear of retaliation or lack of trust,” he says. It doesn’t help that CEOs have a lot on their plate, besides supervising RTE compliance.

A dedicated RTE grievance redressal agency with an online mechanism will go a long way in helping the aggrieved party.

When asked whether the TN Commission for Protection of Child Rights (TNCPCR) is doing its statutory duty of monitoring the RTE act, Gilber says that they have been “largely unresponsive to representations sent by [Bhumi] and complaints from parents”.

In addition to spirited enforcement of existing rules, Tamil Nadu can explore amending the rules along the lines of Delhi, where the extension of the ‘neighbourhood criterion’ is mandated. Delhi’s RTE portal lets parents choose schools in the 0-1, 1-3, 3-6, and beyond 6 kilometres distance range, in their order of preference. This would greatly expand the options for parents who face geographic and entry-level barriers.

The evasion of CBSE schools is another unresolved mystery. Although Section 12(1)(c) includes all unaided schools irrespective of their affiliation, CBSE schools in Tamil Nadu are conspicuously missing from the RTE quota scene. Reasons range from having different timelines for admissions to discord over the extent to which a state government can control central government schools. Ending this impunity will throw the doors of CBSE schools open to deserving children in their neighbourhood.

The ‘high fees in CBSE schools’ has also been cited as a reason for the inapplicability of Section 12(1)(c). However, the State of the Nation report finds that the current calculation for per-child cost borne by the state government is arbitrary and opaque. According to the TN RTE rules, the per-child cost of education equals the total recurring expenditure on government schools by the state government divided by the number of children enrolled in these schools. What this means is that the fiscal health of said state and the enrolment in state-owned schools determines how unaided schools are reimbursed! Not only do these variables fluctuate every year, but they hardly account for the quality of education imparted in some unaided schools and additional facilities on offer. Hence, as the report suggests, a more transparent and sound methodology of calculating the per-child cost needs to be adopted.

India’s ethos of ‘cooperative federalism’ must move from paper to practice, wherein the Centre and states reimburse schools on time, every time. The right to transfer must be amended to accommodate special cases under the quota. Such low-cost interventions can stop children from falling through the cracks of the State’s educational machinery by enforcing what is a revolutionary provision in a landmark Act of India.