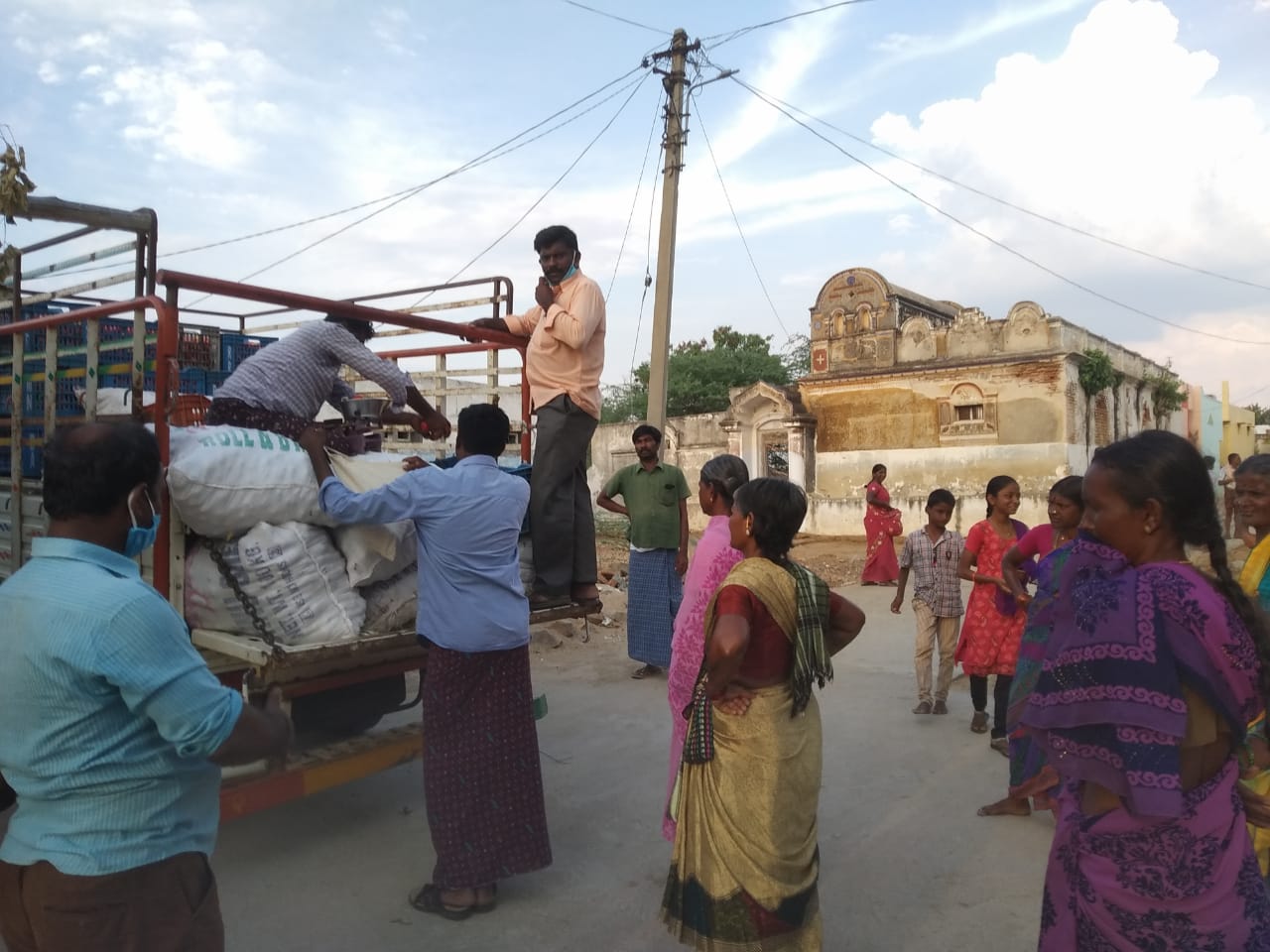 Between March and April, rabi crops– or crops sown in the winter months–are ready to be harvested in India. This year, the harvest period coincided with the initial 21-day lockdown put in place to contain the spread of coronavirus. With the lockdown, millions of farmers faced a conundrum. Their produce was ready, but the labour to harvest it was difficult to find as transport operations halted, while the mandis where they sold their produce were no longer permitted to operate.

As a result, the produce of the season, ranging from cereals like wheat and barley, to cash crops like cotton, to fruits like watermelons, tomatoes, and muskmelons, are literally lying to rot. Some of the most hard-hitting sights of this agricultural crisis have been from Karnataka, where farmers have ended up destroying their tomatoes which have rotted in an absence of buyers.

#India is one of the largest #agricultural exporters in the world & its rural supply chains have become negatively impacted by the lockdown, with some farmers forced to dump their winter harvest leading to a drop in some farm gate commodity prices https://t.co/9gR69DhW34 #Farming pic.twitter.com/7hUKVlgX0j

Now, from the 15th of April onwards, the Central government has allowed all states to resume operations in mandis in the hope of providing relief to the farmers and keeping the economy going.

Return of the Mandis

In Pratapgarh, Rajasthan, villages are slowly awakening from the lockdown slumber. In the mandi, the bidding of wheat, the major crop harvested during this time, began on the 15th of April. 65 tractors made their way from two panchayats to sell 1781 quintals of wheat.

The administration has been strategic while re-opening the mandis during the lockdown: it has diligently listed that only two panchayats sell their produce on each day between the 15th to 30th April, to minimize contact between people.

Yet, although mandis across the country started to slowly buzz with sellers since the 16th, reports have shown that the produce sold was 23-90% lower than the last-year.

“We do not have enough income yet to pay the labour who will harvest the produce,” Karu Lal, a farmer from Pratapgarh tells The Bastion. “So how will farmers harvest the produce?” He further mentions that currently, to avoid overcrowding, the administration is only allowing one tractor trolly of wheat from each household to be sold. In this case, the rest of their produce, which is perishable, will not survive in their homes for long. “From last year, the market prices for wheat have gone down by ₹ 500 per quintal,” he laments.

It will take a while for normalcy to return to the agricultural market. But, before the mandis were made operational, some villages had been experimenting with different models to meet the needs of the farmers who wanted to sell their products, as well as families in the villages who were in dire need of sustenance. Some of them acted out of pure altruism, as seen in the case of Pratapgarh.

During the same time that farmers in Pratapgarh were struggling to sell their wheat, many families in the region were also facing food shortages. This included about 35 migrant labourers, who had managed to get back home to Pratapgarh from the different states where they worked. But, upon reaching home, they found they had no source of income.

So, Panchayat leaders and village development officers in Pratapgarh block initiated a process—a tractor drove through eight villages of the region. Marginal, medium, and even small-scale farmers willingly contributed their grains to the tractor. With contributions ranging from 3 kilograms to higher quantities, the tractor was able to collect a total of 188 quintals of produce.

“We decided to do this since we saw people living close by struggling to find food to eat,” says Karulal. His family contributed 20 kilograms to the tractor. “Those living close by also contributed as much as they could, and some families could not afford to contribute at all. But, nobody forced anyone to share.”

These grains were transported to a common point at the block level, called the Pratapgarh Control Room. “From here, every Panchayat was handed over a specific amount of grains that they could directly transfer to the people in need in their region,” explains Wasim, from the Foundation for Ecological Security, an NGO working in the area. “Some of these donated grains were handed over along with other essential goods and ration kits that the government or NGOs in the region are providing for the poor.”

The first round of donation, collection, and dissemination has been able to feed families for 10 days. “In the face of a tragedy like this, the Panchayat members and villagers have gotten together and taken this initiative,” comments Wasim.

Almost 800 km south to Pratapgarh, in southern Andhra Pradesh, a village decided to attempt creating a local market while keeping social distancing intact during the lockdown. The model began with a simple question to the farmers in the village of Nambula Pulakunta, better known as N.P. Kunta: “Do you plan to sell your produce, or just leave it?”

Although their produce of brinjal, tomatoes, and cluster beans was ready for harvesting, the absence of agricultural labour, transportation, and markets meant that the farmers had no choice but to let their produce lie and rot.

That is when the N.P. Kunta’s Village Institution—an institution formed to facilitate development and conservation work—stepped in. The creation of this village institution was facilitated by the Foundation for Ecological Security (FES), to ensure collective action and democratic decision making on conservation issues in the village.

The Village Institution acquired money available through FES’ on-going projects and campaigns. With that, they bought the farmers’ produce. “This worked out well for the farmers who wanted to sell since they were getting the market rate at their doorstep, without having to worry about things like transportation,” says Lalu Prasad, who works with FES, and initiated this process in N.P. Kunta.

Members of the Village Institution bought over 1,000 kilograms of tomatoes, 700 kilograms of brinjal, and 55 kilograms of cluster beans. Then, they transported the vegetables to eight very remote gram panchayats like Godduvelagala, Thummalabailu, Timmamma Marrimanu, and Dhaniyanichereuvu. Here, they sold them for prices as low as ₹5 per kg. In some of these villages, government aid has yet to reach families in need.

“During this process, some farmers even stepped up to provide their produce for free,” says Lalu Prasad. “In return, we provided some vegetables for free to those villagers who couldn’t afford to buy it at these prices either.”

The initiative ran for three days. While this offers some relief to the farmers who wouldn’t have been able to sell their produce, the initiative is yet to break-even. The total expenditure incurred by the Village Institution for buying vegetables, labour costs for harvesting the produce, and transportation, was a little over ₹14,000.  The total money earned, on the other hand, has been a minimal ₹5,500. The Village Institution hopes to recover these costs and break-even by raising more money from within the NGO.

The pandemic is ebbing and flowing across the globe; one thing that seems clear is that gaps in managing the crisis remain. It’s in these gaps that nuggets of optimism sometimes shine, as civil society and citizens occupy these spaces. Like villages from Rajasthan and Andhra Pradesh show, all you need is love, and a Gram Sabha unafraid to take initiatives.