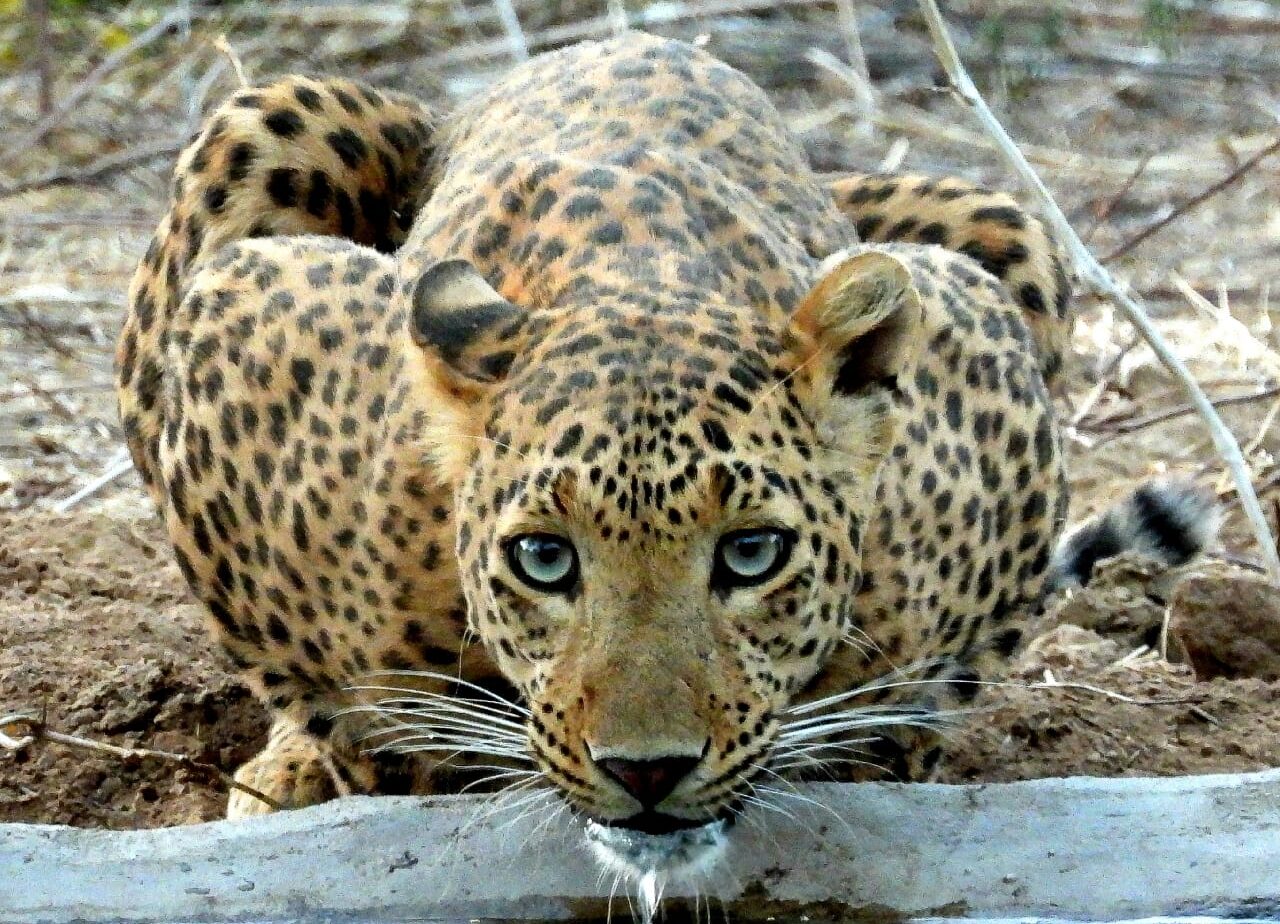 The news of a pregnant elephant dying after consuming a pineapple filled with crackers in Kerala has been doing the rounds. The fact that the crackers were meant to ward off wild boars and other animals that harm the farmers’ crops, has also brought to light a larger problem at hand: increasing human-wildlife conflicts in areas close to forests. In the past, the need and efforts to mitigate such conflicts have received scant attention from the government.

Next to a Leopard Reserve area in Rajasthan’s Jhalana, an NGO, Hope and Beyond, has focused on mitigating such conflicts. They have been involving local communities to get to the crux of the human-wildlife conflict here: why have leopards become regular visitors to the settlements close to the reserve? Since 2016 under their flagship initiative Project Pardus, the NGO has introduced mitigation strategies that do justice to both the leopards, as well as humans.

Adjacent to the concrete jungle of Jaipur City in Rajasthan run the Aravallis, considered to be one of the world’s oldest mountainous ranges. Just across these ranges stretches about 23 km² of forested patch; this is the Jhalana Forest Reserve. The deciduous vegetation of Jhalana shelters a variety of life across harsh climatic conditions: temperatures here can go from 5°C during the winter to a scorching 45°C during the summer. Amongst its various forms of wildlife, the most popular species here are the 28 leopards that call Jhalana home.

Although deemed as a Reserved Forest in 1961, it was not until 2018 that the Rajasthan Forest Department declared Jhalana a “Leopard Reserve” area. In doing so, the Department managed to filter and control the movement of people and vehicles into the Reserve.

The wildlife, of course, could not be expected to follow the strict boundaries and regulations set by the State. In recent years, the leopards became regular visitors in the neighbouring 18 villages, which supported over 10 lakh residents. And so, this transition from a Reserved Forest to a Leopard Reserve orchestrated the growing human-animal conflicts in the region.

There are underlying reasons for the conflicts that plague Jhalana. Today’s mass urbanisation rate and the subsequent shrinking of the big cats’ habitats are just a few. Diminishing water sources in the Reserve is an additional challenge: it is important to note that while Jhalana has several man-made water holes, it does not have natural water bodies. This situation has forced the leopards to share habitats and territories, not just with each other, but also with the bordering human settlements.

Jhalana faces an additional complexity. Usually, a ‘buffer zone’, or eco-sensitive zone, is created around National Parks or Wildlife Sanctuaries. In these ‘buffer zones’ “regulation, rather than prohibition of specific activities” takes place. The zones are supposed to act as a ‘transition zone’ between the core area, which has a high concentration of protected wildlife, and the fringe areas that have low protections in place for the wildlife. Since Jhalana is categorised as a Reserved Forest, such buffer zones do not exist. The wildlife has no option but to move from a highly protected forest, to a crowded habitation, with no transition space in-between.

“When the reserve was open to all before 2017, be it morning walkers or wildlife enthusiasts–they all had access to the forest,” explains Dr. Joy Gardner, Chairman of Hope and Beyond. “We started noticing that this was incredibly disturbing and stressful for the leopards and they were being driven outside of the forest. Soon, a spike in accidents like roadkills or deaths by the lynching of the leopards were being reported.”

Undoubtedly, such conflicts were a threat to the peaceful coexistence between humans and wildlife on the fringes of Jhanana Reserve. But, the larger root of the problem was the lack of prey for the leopards, which Project Pardus attempted to resolve.

To fix the prey problem, Hope and Beyond and the Forest Department initiated Project Pardus in 2016. The aim was two-fold: to increase the prey for leopards available in the Reserve, and to introduce mitigation strategies that prevent leopard attacks in the villages lying on the Reserve’s periphery.

To understand exactly where the conflict was, the project engaged in a survey amongst the 18 peripheral villages. “While 15 out of 18 [surveyed] villages on the fringes of Jhalana suffered from human-wildlife conflict, 5 villages were found to be major conflict zones,” says Dr. Gardner. These conflict areas were meticulously marked on a GPS device and then graded from ‘highest’ to ‘lowest’ on the basis of leopard sightings and reported conflict cases. Primary data was collected by Troopers–who are from the local communities, and work with Hope and Beyond in leading all on-ground interactions with the villagers.

The course of the project brought out an additional reason for the leopards’ increasingly common contact with human habitations: herbivore decline. Most of the leopard prey base included fawns and calves. Over time, this prey base diminished as their habitats diminished, mostly due to population and urbanisation pressures, large-scale cattle grazing, and encroachments on forest land.

Now, in the Reserve, the leopards had only one other option to prey on–full-grown Blue Bulls (Boselaphus tragocamelus). Considering their size, it was an arduous task for the leopards to take down such big animals. In turn, as an adaptation strategy, the leopards learned that it was much easier to prey on dogs and livestock, which increased their forays into human habitations.

Interestingly, sightings of leopards feeding on squirrels and monitor lizards have also been seen over the past few years. These findings are alarming, because if these trends continue, over the coming years these leopards would not know how to hunt larger prey at all, and would only teach their young cubs to feed on easy prey like dogs and cattle.

The Forest Department contributed to the project by supplying secondary data. Their efforts also concentrated on renewing the forest floor, so more herbivores could sustain themselves. “We have been holding plantation drives of local plants and trees that provide fodder to the leopard’s prey base,” explains Sudarshan Sharma, Divisional Forest Officer. He further explains how the Department has been vigorously clearing the forest floor of dry thorny vegetation consisting of Prosopis Juliflora–an invasive weed–so that the floor, that comprises of the herbivores’ fodder, can be rejuvenated.

Apart from reducing the leopard’s dependency on cattle, a part of the project also focused on initiating awareness programmes with the affected population about mitigation techniques and government policies.

Talking about the lack of awareness on government policies dealing with such conflicts, Dr. Gardner says, “During our interactions with the people, we were told that a local had received compensation only as late as 2017, after the last one in 1972.”

This is not as surprising since compensation policies across India are inconsistent. Among 29 states, 22 compensate for crop loss, 18 for property damage, 26 for livestock depredation, and 28 for human injury or death, as a paper by Karanth et al. shows. Further, the rates of compensation also differ. In fact, it has been reported that for some states like Manipur and Nagaland, no policy for wildlife-caused injury or death exists, while Rajasthan has no policy for crops damaged by wild animals.

Keeping this in mind, Project Pardus has attempted to spread awareness on the legalities of receiving the correct compensation to local populations. Apart from this, another focus was on installing metallic fences around otherwise feeble livestock sheds, who were otherwise left out in the open at night. Installed using NGO funds, and some contributions from the affected families, these metallic fences with halogen lights are meant to keep the leopards from attacking the cattle.

But, one specific strategy proved to be groundbreaking: a technique called the “I-COW Technique”. The I-COW Technique was first used by conservation biologist Dr. Neil Jordan in Botswana, Africa, in 2015 to ward off lions attacking cattle. The technique is backed by the evolutionary eyespot tactic, in which animals have eye-like prints on their body to make them less vulnerable. This can be seen in butterflies and moths most commonly, along with certain species of snakes and fish.

Simulating this, eyes are drawn on the rumps of the cattle. Since big cats stalk and attack their prey from behind, the eye imitation takes the attention off the vulnerable region, making the predator back off from the hunt. This was the first time the technique was used on leopards. Between 2016-17, a total of 1,463 cows were painted, with the practice continuing since then.

Since the implementation of the I-COW technique, Jhalana has not seen a single incident of a leopard attack.

There is no doubt that it is a challenging feat to completely eliminate wildlife-human conflict. However, to be able to do justice to both the wildlife and the people, efforts need to be made towards establishing what the real ‘problem’ is. In this case, the diminishing prey base of the leopards also received equal attention, which could shift the focus away from simply making compensation policies more accessible to the affected population.

Featured image courtesy of Mr. Ravi Shastri; Hope and Beyond.

A Point of No Return? Climate Crisis and COVID-19 Strains Nomadic Pastoralism in Rajasthan

At the Heart of Mizoram-Assam Border Clashes, a Reserved Forest

Moving When the World is Still: The Seasonal Migration of Van Gujjars Amidst a Pandemic