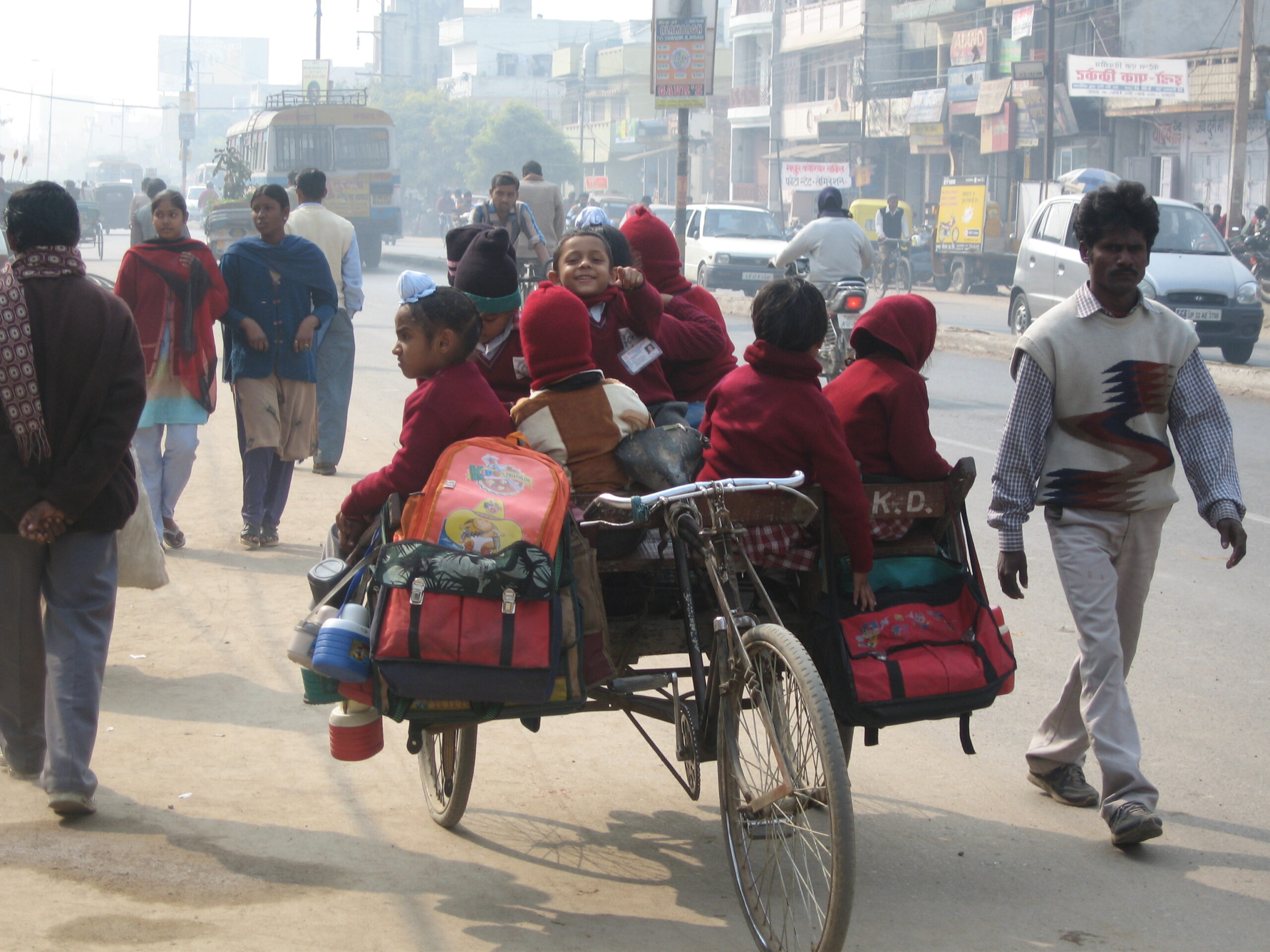 Which state in India comes to mind when you hear about poor literacy rates, gender inequality, low teacher-student ratios, and bad learning outcomes? I wouldn’t be surprised if it was Uttar Pradesh (UP).  UP is India’s most populated state with a population of 200 million. A fourth of this population are aged between 5 and 14 years, making it India’s largest child population. Considering the huge numbers, is education, a subject that should be given the topmost priority, really being taken seriously by the state government?

The State of Primary Education in Uttar Pradesh

There is an urgent need to take a closer look at the state of education in India’s most populated state.

Out of the 36 states and Union territories (UTs), Uttar Pradesh is at the bottom of the heap when it comes to education. According to data reported in EdCIL – SSA, a 2016 MHRD study, 16 lakh students between the ages of 6-13 years were not enrolled in school. This accounts for about 3.9% of the total population of children in UP. This adds insult to injury to UP’s literacy rate of 69.72 %, which is the eighth lowest in the country, according to Census 2011.

A teacher plays a crucial role in the state of learning outcomes. Unfortunately, in the state, there is a huge gap between the number of teachers required and currently appointed in the state. As many as 1.6 lakh teaching posts are still vacant in government-run schools across 75 districts of Uttar Pradesh, despite the recruitment of 15,000 assistant teachers to bridge the shortfall. These revelations emerged after an activist Durgesh Pratap Singh filed an RTI application with the HRD ministry.

India’s largest state by population also has the worst pupil-teacher ratio (PTR) in India, with one teacher for every 39 students at the primary level, against the all India average of 23:1, according to the U-DISE Flash Statistics for 2015-16. While the numbers are worrying, what needs to be questioned is, why is there still a huge learning gap?

What the 2020 UP Education Budget Aims to Do

After the announcement of the 2020 Union Budget, the UP government released its state budget on 18th February. The biggest ever UP state budget to be released, it stands at ₹ 5,12,860 crore, a ₹ 33,159 crore jump from the previous fiscal year.

Looking at the figures, on the face of it, education is a subject in prime focus in the state’s budget. The government has allocated ₹783 crore for the improvement of education and basic infrastructure facilities under the Pradhan Mantri Jan Vikas Karyakram in minority-dominated districts. The budget also has many generous plans for the education sector — 3 new varsities are to be set up, an Atal Bihari Vajpayee Medical University is to be built, and madrasas are to be modernized. The government has also allocated ₹ 11 crore for the Rashtriya Uchchatar Shiksha Abhiyan to improve higher education.

You May Also Like: Situating the Madrasa in Modern India: Is Reform Around the Corner?

States are given the flexibility to prioritise different budgetary components based on their needs. For example, in FY 2018-19, UP allocated a whopping 92% of its total approved budget for elementary education, which was the highest among all states. This year, there is a sincere focus on primary education. ₹ 270 crore has been allocated for Atal Residential Schools to be set up in 18 divisions (or groups of districts). A budget provision of ₹ 2,660 crore for the Mid-day meal scheme has been allocated, while ₹ 18,363 crore is on the books for the Samagra Siksha Abhiyan (SMSA), a scheme aiming to improve the quality of school education. Notably the SMSA, a major education initiative, didn’t find a mention in the 2020 Budget speech by Minister of Finance Nirmala Sitharaman.

However, after budget allocations, expenditure is the next important step for an effective financial year with successful policy implementation.

The Project Approval Board (PAB) under the MHRD approves the proposed state budgets for SMSA. Since 2015, the fund sharing ratio between the Central and state governments is 60:40 for most states, and 90:10 for northeastern and Himalayan states.

In FY 2018-19, a whopping 95% of the proposed SMSA fund was approved for Uttar Pradesh which is higher than the approved funds for many other states. However, when looking at the expenditure, during the first eight months of FY 2018-19 while states had spent only 19% of the total approved state budget–proving the fact that the pace of expenditure under SMSA was slow–only four states had spent more than 30% of their approved budget. Gujarat, Assam, Jharkhand, and UP logged higher expenditure than other states, a positive sign in terms of policy implementation.

Now, there are several reasons for overall low utilisation, as well as the delayed release of funds. Funds not spent in one fiscal year are considered spillovers for the next year. From the pattern of expenditure, in FY 2018-19, while states like Andhra Pradesh, Punjab, and Maharashtra had the highest share of spillover funds from the previous year, Uttar Pradesh had only 3%. What this means is that the state had spent a huge 97% of the approved fund in the same financial year.

This particularly raises many concerns; if almost all the approved funds were spent by the state government, where were they spent? Were they allocated and spent wisely keeping the daunting issues of the state’s education system in mind? In spite of the state’s comparatively high expenditure rate and numerous educational initiatives, why is the state still so backward in terms of education policies and outcomes?

Where is the Gap?

What’s interesting to note is that in spite of its massive state budget, Uttar Pradesh has allocated only 13.6% of its total expenditure for education in 2020-21. This is much lower than the average expenditure (15.9%) allocated for education by states (using 2019-20 Budget Estimates) which is a matter of concern.

The state, mostly at the end of the stack when it comes to education, has seen some major changes by the Yogi Adityanath government. For example, The Graded Learning Programme (GLP) was initiated in August 2018 through a partnership between Pratham and the Uttar Pradesh Basic Education Department and sought to target all primary school children in UP. The state is also ranked amongst the first few states to have successfully implemented the Education for All policy. To ensure every child is enrolled in school, the ‘Khoob Padho, Aage Badho’ campaign was launched in 2017. Out of 147 meritorious students selected for the Rani Lakshmi Bai Award, 99 were girls under the campaign. Considering the importance of teachers, the process of recruitment for 10,768 assistant teachers and 3,794 lecturers is on, while the same was initiated for assistant teachers in 2018. While these are definitely some encouraging efforts, instilling hope for a better state of education in the state, are they enough to change the scenario of school education in Uttar Pradesh? Unfortunately, the answer is no.

Over 10 lakh posts of elementary school teachers (Class 1 to VIII) lying vacant in India, reports @IndianExpress @Anjuagnihotri1. UP tops the chart with 43.9% vacancies. Goa, Sikkim and Odisha have zero percent.

One of the main reasons for this dismaying state is the lack of attention to design the budget wisely keeping all the components for quality education in mind. Firstly, UP is spending nominally on teacher training and school inspection and monitoring.

Secondly, the low student-teacher ratio, especially the shortage of science and mathematics teachers, has far-reaching implications in the state. Because of poor allocations for teacher education, the state has failed to build adequate teacher training institutes and institutional capacity to train teachers. Moreover, the low unit cost of in-service teacher training under SMSA, made it impossible for teachers to develop an understanding of subject matter and pedagogy. Surprisingly, in spite of the severe challenges, there is no specific mention of teacher training institutes, teacher recruitment, or teacher qualification and effectiveness in the 2020 budget!

Despite understanding the urgent need recruitment of additional teachers in Uttar Pradesh has not kept pace with rapidly growing enrolment. The limited fiscal space available to the state is the key reason that causes low recruitment, or in some cases, no recruitment.

However, the state needs to work on the recommendations of various stakeholders involved in state education with a prioritised list of investments based on their demands. Firstly, teacher recruitment and training should be the UP state government’s first priority, considering the immediate need to create adequate teacher training institutes in the state. The state also needs to invest in hiring qualified and subject-specific teachers at both the primary and secondary levels. Secondly, more funds need to be invested in marginalised children, especially children with disabilities. As a first step, the state government should also identify the exact number of out of school children (OOSC) and prioritise bringing them back to school.

While the UP government has taken various initiatives for improving the quality of education, after the recent budget allocation, it is crucial for the state government to lay concrete plans for better utilisation of the approved funds to provide quality school education accessible to all sections of the society. The government needs to step up and design a sustainable model and investment plan for education in order to reap the human resource benefits from this sector. It’s time to see if the new state budget has offered anything concrete for improving the quality of school education or whether it is simply directionless.