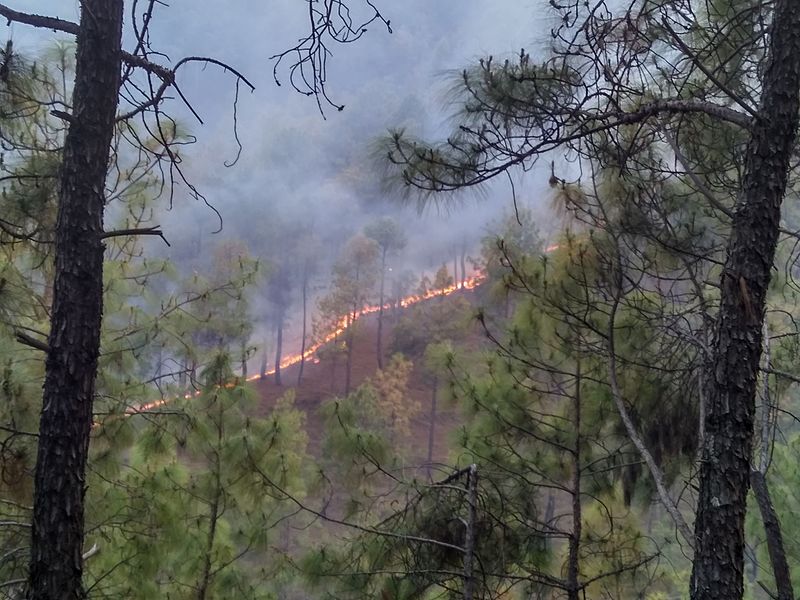 The Uttarakhand forest fires are in the news again. As various photos of raging fires circulated on social media, the Forest Department issued statements clarifying that much of that news is fake. In fact, they say that this year the fires have been far less devastating, affecting around 100 hectares of forest, as compared to last year when about 1200 hectares were affected. Yet, as these debates go on, I can’t help but remember the devastating fires that engulfed Uttarakhand’s forests in 2016.

Fake news of forest fire 2020 in Uttarakhand are being circulated on social media. After verification of such images it has been found that these images are fake. Few such images are being uploaded by us. It is our request to kindly do not spread fake news. pic.twitter.com/B9GBK8DgaL

A journey that I undertook with Tarun ji, the convenor of the Vanpanchayat Sangharsha Morcha through the charred forests of Okhalkanda village in Uttarakhand’s Nainital district, will always remain etched in my memory. We drove through extensively burnt forests that were still burning in some patches.

We were there to gauge the damage caused by the fires, and to meet and pay our respects to the family of Shri Jai Singh Bora–the man who sacrificed his life earlier that month to save the forests he lived for. Kundan Singh Bora, Jai Singh ji’s younger brother, began to describe the events of the fateful day–the 26th of April, 2016– that took Jai Singh ji away from them.

75-year-old Jai Singh ji was elected as the Sarpanch of Okhalkanda (lower) Van Panchayat 45 years ago. His dedication and love for the forest were so strong that the village mandated that he remain the Sarpanch until the day he died. “Our family and the whole village is deeply connected to the forests around us. Not only the van panchayat [forests managed by village communities in Uttarakhand] forests but even the Reserved Forests [forests owned by the government]. Much of this connect was inspired by my brother, Jai Singhji,” says Kundan Singh ji.

Jai Singh ji and those around him knew the forests well. As the locals say, jal, jangal, zameen (or water, forest, and land), have been their lifelines for years. People’s day-to-day lives were heavily dependent on the forests for firewood, grass, leaves, medicines, fruits, and roots, amongst other resources. In pre-colonial times, forests were managed as a common property resource using various systems such as lath panchayats (a system of forest protection on rotation) and van panchayats. Community rules regarding the minimum girth for trees that could be felled were followed by all locals in their own self-interest.

So, the burning of the forests would cause huge losses to all the communities dependent on them. The first sign of fire would send women, men, and children from village after village running to the location to put out the fire. Most of these conservation practices are still followed. It is not surprising, therefore (as mentioned by the locals) that the forests that burnt in the recent 2020 fires were largely Reserved Forests belonging to the government. Only a few van panchayat forests that belong to the village communities were affected, because of locals’ long history of community management over these natural resources. Given all of this, how is it possible for fires to spread in a region with some of the strongest traditions of forest conservation?

Reversing a Trend of Self-governed forests

Van panchayats were constituted as a result of a huge andolan (agitation) in 1921 against the then colonial government. As early as the 1800s, the British had taken over large tracts of Utararkhand’s forests from village communities, and converted them into Reserved Forests. Since the villagers’ customary rights were being curtailed, an andolan broke out. As a result, after enacting the Van Panchayat Act in 1931, the colonial government was forced to return parts of the forests as ‘van panchayat forests’ and ‘civil forests’. The Act provided the villagers with autonomy over forest management, which carried over into independent India. But, over the last few decades, these powers have been slowly diluted, despite the efforts of individuals like Jai Singh ji.

After Independence, instead of returning control over the forests to local communities, colonial trends of curtailing local rights and responsibilities continued. Today, over 80% of the total forests in Uttarakhand are under the control of the Forest or Revenue departments. About one-fourth of this forest land falls under ‘strictly protected’ categories such as national parks, wildlife sanctuaries, and biosphere reserves, which highly restrict locals’ access to the forests and the resources therein. Over the years, local autonomy over van panchayat forests was also gradually reduced and the forest department’s control over them increased, until eventually they were brought under the Village Forest Rules of 1927, instead of the independent Van Panchayat Act of 1931. This change got the Van Panchayats under the control of the Forest Department.

18 years ago, Jai Singh ji managed to convince even the Forest Department–against their then practiced plantation policy–to plant oak and other broadleaf trees instead of Chir Pine on a stretch of Reserved Forest land that extended to about 100 hectares. Why? The dry pine leaves–locally known as pirul–are highly inflammable and hence, not favoured by local communities. It is the conscious planting of pirul trees by the State at scale that in part contributed to the devastating consequences of Uttarakhand’s forest fires in 2016.

Fires, particularly in years without winter rains, are common occurrences in the hills; what was uncommon in 2016, was the extent and magnitude of them. According to Forest Department data, the fires in 2016 affected around 2,588 hectares of Reserved Forest, and 1,436 hectares of Civil Forests and van panchayat forests, causing an estimated financial loss of ₹ 41,51,975.  Five deaths were reported–excluding those of Jai Singhji and four others who lost their lives in Nainital district–and 17 people were injured.

In the afternoon of the 26th of April 2016, warning calls on the second forest fire of the day had broken out near the Reserved Forests of Chir Pine above the village. Jai Singh ji picked up his walking stick and ran to gather other men, women, and children to help put out the fire. He also put on dark glasses as he had recently had a cataract surgery.

Kundan Singh ji narrated the events of that day. A burning pine cone fell on a deep nullah (stream) full of dried biomass, setting it off like a grenade. Jai Singh ji’s dark glasses fell off and his eyes were incapacitated by the glare. He could no longer see where he was going. “He was closest to the fire,” says Kundan Singh. “That was the last we saw of him.”

We walked up to the hill where the fires had raged. On the way, we saw the water tanks that Jai Singh ji had helped build over the years to water the saplings–they were now providing water to extinguish the fires instead.

The Increasing Commercialisation of Forests

As community rights fade into the background, now, in these government-controlled forests of Uttarakhand, commercial interests dominate instead of conservation. Over 30% of the forests in Uttarakhand have gradually shifted from being mixed forests, to Chir Pine forests. Chir Pine yields resin (lisa), which is extracted by resin contractors for its commercial value.

But, in a meeting hosted at the Govind Vallabh Pant Institute, Kosi in May 2016, forest officials admitted that they were unable to physically monitor the resin extraction process because of insufficient human power. More often than not, rules get flouted. The instant a pirul tree catches fire, Lisa, being highly inflammable, spreads the fire to other trees. A combination of burning Chir Pine dominated forests, lisa, and pirul behave like an ammunition factory on fire. Conversations with villagers of the Kumaon hills usually culminate with holding the Forest Department predominantly responsible for the spread of fires, and often, for even starting the fires.

Large scale plantations are operated under the National Afforestation Programme and Compensatory Afforestation Fund. Since the plantations invariably fail, the best way to avoid accountability is to burn the forests. Instead of the department being held officially responsible for the fire, the fire itself is used as a pretext under which to receive more funds for the plantation for the subsequent year, putting in place a vicious cycle of destruction.

Moreover, since the Supreme Court’s 1996 ban disallows tree felling above the altitude of 1000 metres, a fire is one of the easiest ways to fell timber in these regions. As the burnt trees fall in the subsequent rains, the Forest Development Corporation collects fallen timber–particularly if it is of the right quality or at an accessible place–to be dried and sold later. The rest remains in the forest, as fuel for the next fire. Constant requests by the local people seeking this fallen wood are refused or ignored because of legal and policy requirements.

Until a few years ago, as a strategy to control fires in the Reserved Forests, the Forest Department appointed fire watchers in all villages, who would call people to extinguish fires as soon as they were spotted. Additionally, they practiced cutting fire lines at strategic points with the help of the local villages.

Both the practices have been discontinued by the Forest Department citing reasons such as lack of ground staff, and a dearth of financial resources for controlling forest fires.

Letters like this are being sent by villages and communities across the country to State govts, demanding they should defend forest rights and oppose draconian, unconstitutional amendments to the Indian Forest Act (this particular one is from Chamiyala in Uttarakhand) pic.twitter.com/nUeHK9B2wZ

But, for the long term safety and sustainability of Uttarakhand’s forests and biodiversity, the only way forward is to revert to community control and management over the forests. This calls for urgent implementation of the Forest Rights Act, 2006, which has a provision of Community Forest Rights (CFR) that allows communities to use, manage, and protect their common forests. Yet, despite many village communities filing claims over their forests, only one claim to CFR has been recognised by the Uttarakhand government.

The 2016 fires were followed by heavy rains in Uttarakhand. Public imagination switched to the rains instead, such that the impact of the fires seemed like ancient history. Four years later, the fires continue without people’s voices being taken into account. Will the otherwise transformative 2020 make this state of affairs any different?

“The administration has been very proactive in offering compensation of ₹4,00,000 to us. Yes, money is always useful, but that is not what we really want,” said Kundan Singh ji . “He [Jai Singh ji] has left enough for us. What we want is that such fires are prevented and that concerned actors are held accountable. Above all, we want recognition for his lifetime’s dedication to forests and his supreme sacrifice.”

To read more on development alternatives in India, curated by The Bastion and Kalpavriksh under ‘Ecologies of Hope’, click here.

What is the future of India’s forests? Explaining the proposed Forest Conservation Act Amendments