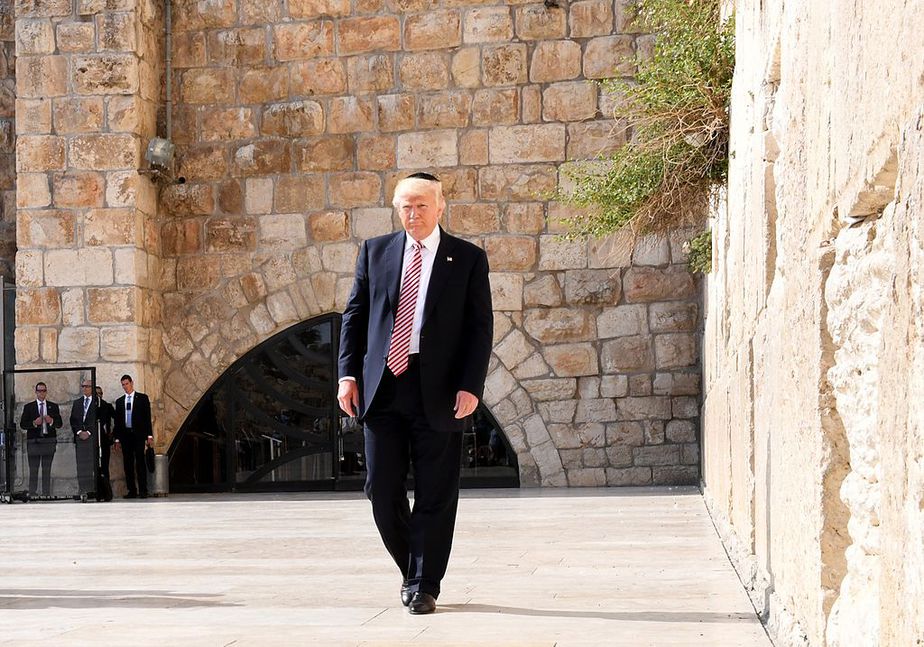 Researched and Written by Manas Dutt.

Upending nearly seven decades of U.S. foreign policy, Donald Trump recently announced his decision to move the U.S. Embassy from Tel Aviv to Jerusalem. Trump not only recognized Jerusalem as the capital of Israel, but also implicitly quashed all hopes for a two-state solution to the long-standing Israeli-Palestinian conflict, despite him saying that he still supported one. The decision has been met with vehement disapproval from the international community (with the exception of Israeli Prime Minister Benjamin Netanyahu), citing that it is in violation of the international law and downplays the role of USA  as a neutral arbiter in the region. This article situates itself right at the centre of the Israeli-Palestinian conflict, against the backdrop of USA’s foreign policy U-turn, attempting to gauge the impact of this move on the political landscape of the Arab region.

Jerusalem is the focal point of three major religions; it’s where Solomon built the first Temple, the place of the crucifixion of Christ and where the Prophet Mohammed ascended into heaven. More than anything else, Jerusalem is the bone of contention to the Israeli-Palestinian problem, deemed by both states as their respective capital. The strategic importance of Jerusalem, clearly, cannot be overstated. Trump’s embassy relocation risks upsetting the precarious equation keeping Palestine afloat. It begs the following fundamental question:

How does this ‘Make America Great Again’?

The simple answer: It doesn’t. USA stands to gain nothing from the embassy relocation. The Trump proclamation comes in light of a campaign promise he made in 2016 to move the embassy into Jerusalem. In fulfilling his campaign promise, Trump is expressly pandering to the interests of US pro-Israel lobbies which make up a large share of his voter base.

Although Trump reiterated in his Wednesday address that this decision was not intended “in any way” to signal a “departure from (USA’s) strong commitment to facilitate a lasting peace agreement (between the State of Palestine and Israel) ”, the realpolitik situation is entirely different. The Trump administration, in justifying its position, cites the failures of American Secretary George Shultz’s twice failed peace-agreement and the 30-year long peace-process which still hasn’t brought about any long-lasting peace to the region. Up until now, America has presented itself as a neutral arbiter in the Israeli-Palestinian conflict- a facade that has finally been undone. Essentially, Trump has flipped the peace paradigm over its head and repositioned American sympathies on the side of the Israelis, and against the Palestinians.

What is the legal status of Jerusalem?

It is almost an indelible historical fact that Israel procured East Jerusalem forcibly, in the 1967 Six-Day War. The UN Security Council Resolution 478, passed in 1980, terms the acquisition of East Jerusalem as “illegal” and a “violation of international law”. Trump’s move comes as a baffling surprise, seeing as USA is a signatory to this resolution. By recognizing Jerusalem as the capital of Israel, USA has not only breached international law but has also subverted its own credibility in the UN Security Council. Single-handedly, Trump has managed to undo six decades of peace processing and has paved the way towards legitimizing Israel’s claim over East Jerusalem. Furthermore, this move will only embolden Israel’s claim to other ill-gotten territories, undermining the Palestinian cause and displacing many more Palestinians.

With Trump’s senior adviser and son-in-law, Jared Kushner, spearheading a quiet Middle East Peace Plan in the midst of the Jerusalem hasbara, one cannot refrain from pointing out the diametrically opposite stance assumed by Kushner and Trump on the issue at hand. A report by the New York Times quotes Robert Wexler, the president of the S. Daniel Abraham Center for Middle East Peace, as saying that Mr. Kushner and his team had earned respect for their serious efforts and for making peace a priority. “They deserve credit for that,” he said, “which makes it more bewildering why they would seemingly put all that in jeopardy by a premature announcement.” Seeing as Jared Kushner has no previous experience at the negotiating table or international diplomacy, his silent “peace plan” will likely be overshadowed by Trump’s announcement. In any case, the new course of the US Middle East policy tends highly in favour of Israel.

What do Americans think of this move?

According to an IRmep (Institute for Research: Middle Eastern Policy) poll, which fielded the question: ‘Should USA recognize Israel’s (illegal) annexations?” to a representative cross-section of 1,000 adult American Internet users found public opinion split halfway on the issue. The poll reveals a result too close to call, with 48.3% saying Trump should not recognize Israeli territorial annexations, but 47.3% saying that he should.

However, the hold of Israel Affinity Organizations (IAOs) and pro-Israel lobbies on the American Congress and the electoral process, has a huge role to play in the direction things are headed. In his book, Big Israel: How Israel’s Lobby Moves America, Grant Smith discusses the incredible sway Israel lobbies exert over USA’s foreign policy in the Middle-East. In a recent report published on antiwar.com, he claims that “Israel and its US lobby want the US to further undermine international law, which the Trump proclamation clearly allows. The next step will be for the United States to declare that both West and East Jerusalem are the “unified capital” of Israel. Then, the US will be compelled to recognize Israeli claims on portions of the West Bank and the Golan Heights as integral parts of Israel or Israeli-administered territories.”

As America stokes the embers of the Israel-Palestine dispute by taking sides with Israel, it must confront a sobering fact; no other country has its embassy in Jerusalem.

Protecting Our Children on Social Media: The Personal Data Protection Bill Needs to Reconsider the Age of Consent

Oil on Troubled Waters: The Environmental Impact of Proposed Oil Drilling in Alaska

Donald Trump is a Child (And That’s Why People Love Him!)