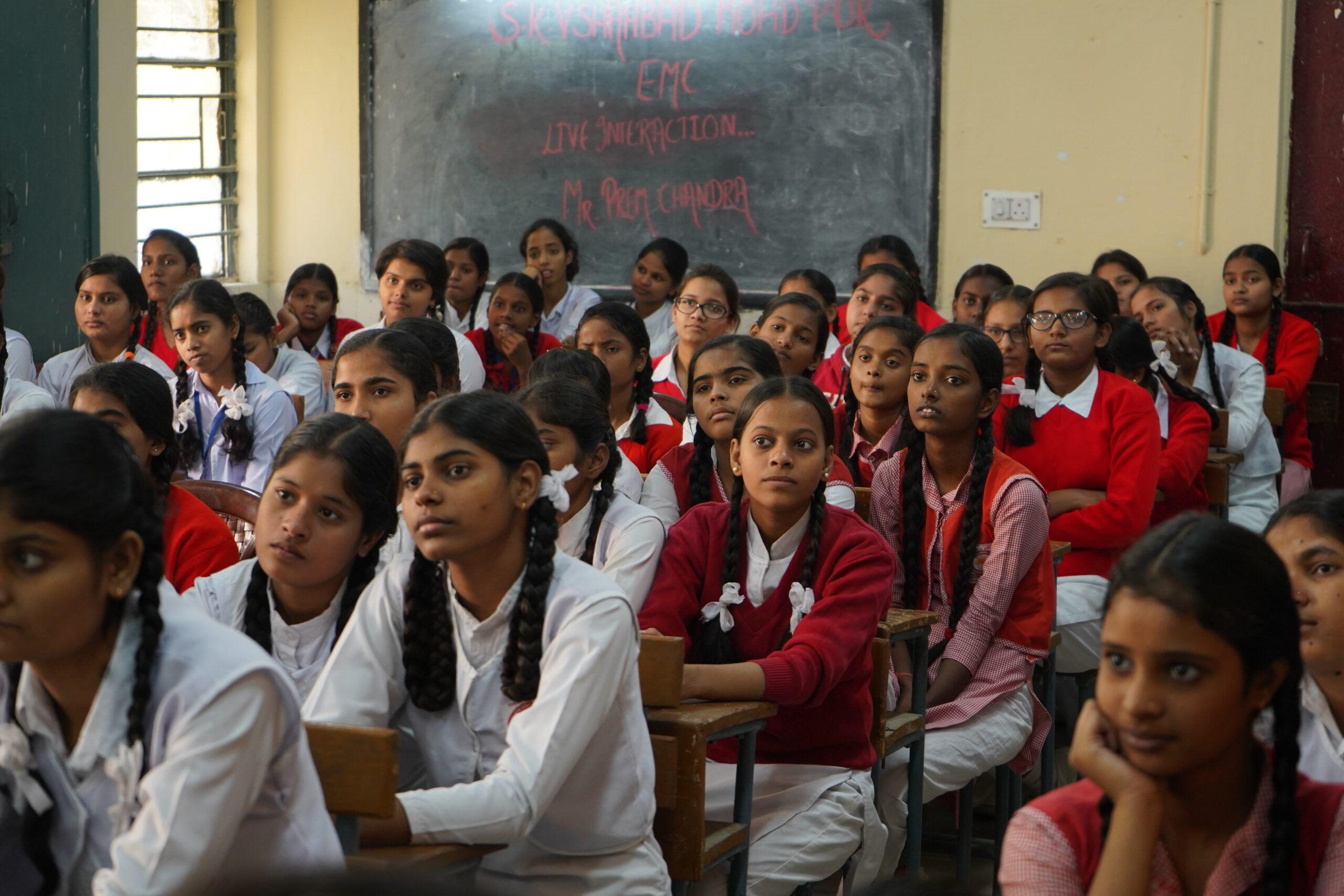 While asking about the problems faced by students during online education, one student told me, “it’s a good thing that we can sit as we like, very relaxed. In school, if we turn back and talk to friends, we will be pelted with chalk and books. Sometimes, we will be severely reprimanded. That’s not the case with online classes”.

By surveilling students’ physical movements—that is, their activities in the classroom—schools are subjecting them to specific political and cultural norms. This is an important social characteristic of how modern societies school their younger generations. The ‘auditing of movement’ in classrooms—and of children’s bodies—has historical significance for societies.

So, if this is the case, who are the ultimate beneficiaries of these socially dictated patterns of movements and actions? How does the ‘desired’ behaviour of children in classrooms become normalised for students and teachers alike? More importantly, how does this institutional disciplining shape the ‘education’ we give our children?

These are critical questions to be addressed by our social engineers as we weigh the benefits of offline classes versus online education during the pandemic.

The Politics of Restricting a Child’s Behaviour

Conceptions about the ideal body shape, as well as the norms of human movements, are shaped by the invisible dictums of a hierarchical social order. These conceptions mould our understanding of what people ‘should’ look like and how they should behave—especially while at school.

For example, societal conceptions about the ideal body shape of men and women, are, as we all know, shaped by our exposure to cinema, social media, and advertisements. Thinness is treated as the ideal body shape for women in India’s mainstream advertising culture (which bears significant urban, caste, and class biases), while the ideal male body is visualised through six-pack abs.

Similarly, monitoring the movements and actions of an individual is important to establish their cultural familiarity with the larger milieu. Simply put, every modern institution demands individuals to perform a specific set of actions and movements—which is what we eventually come to understand as ‘decorum’ in the classroom. For example, in India, most school teachers expect students to greet them and stand up when they enter the classroom. Doing homework and submitting it on time is another action expected from the students.

These carefully cultivated ideas eventually form what we believe to be ‘common sense’ about the body and its movements. This sways humans, and especially children, to conform to socially expected movements and actions—often out of fear of the consequences of breaking convention.

As a result, a student would most likely never break the habit of greeting a teacher, even if they are not in the mood to do so. A student who is unable to do homework, due to poor academic support at home or other learning difficulties, may simply obediently brace themselves for the consequences. They may never come to think that they deserve to be excused for their lack of expected ‘action’—which is often not their fault.

So, ‘common sense’ about the body and its movements and actions is often tacitly oppressive, in that it disciplines a student to simply accept motivated social ideals.

Such patterns are oppressive because ideals stem from a system laden with the interests of the dominant and powerful. That is, our actions are not ours, rather, they just mimic the accepted patterns of action in our society—which are heavily swayed by existing power structures.

In this framework, it is educational institutions that undertake the cultivation of how a student should behave. As the reproductive theory of education notes, they maintain the status quo of the dominant system without posing major challenges to it. In spite of the large amounts of money across the globe earmarked for education for all—in the hope that education will bring about a more equal society—institutions continue to conspicuously reproduce the existing inequalities prevailing in our societies. The social policing that takes place in our classrooms is emblematic of this fact.

The Potential  of Online Learning to Disrupt ‘Discipline’

The key question is: can online classes potentially transcend the violent politics of taming student actions in physical classrooms?

Online classes are largely reclaiming students’ rights to movement and action, taken from them by schools. The body is liberated from being trapped between the bench and the desk. To that end, online classes can and do enable the freedom of student bodies and their non-academic movements and actions. Students could enjoy a walk, run to the kitchen, or snuggle with their parents during breaks.

Empowering the rights and freedoms learners have over their actions is an exemplary ideal from online classes that real classrooms should emulate.

However, although online classes can liberate students from the shackles of surveillance, even in online classes, teachers find ways to overcome the surveillance block to ‘assess’ (not invite) students’ attention through unexpected calls. If not attended to immediately, a slipshod student is confirmed.

One student describes how they must pay heed to their mother’s mobile phone. “I must be super sensitive to the ping of the teacher’s WhatsApp messages, which come alongside Victers TV classes,” they say. Victers TV is an educational channel launched by the Kerala government in 2005; it is heavily relied upon during the pandemic as part of the state’s digital learning initiatives. “Any delay in responding to the instructions of the teacher attracts scolding. So, I keep my mobile phone close to me even when I support my mother with the chores.”

Clearly, in this scenario, students are remote-controlled by the instructions given by the teachers through mobile phones. Instructions come in the form of audio-video and texts, but all through the same device. Teachers sometimes demand compliance with these commands both immediately and in the future as well. Thus, devices are being transformed into channels of authority on how a student shall act.

In this way, technological devices become a natural extension of the physique of a student, or rather, another organ of their body. This added organ channels the instructions that control the actions of digitally distant students.

When devices become extensions of the human body, hacking humans becomes a piece of cake for the cybernetic system—that is, a system where specific outcomes are used to fuel its subsequent actions. This situation opens up new models of controlling and subduing the individual student from an early stage. Obedience to equipment leads students to a state of alienation from their education—this is exacerbated by hapless teachers who struggle online to encourage the intellectual pursuit that is quintessential to learning.

“Our textbook is full of activities,” says a Grade 9 student from a public school in Kerala. “But the teacher can only give us long lectures during online classes. She wants to help us, but it is impossible for her to attend to everyone as she does in the normal classroom. We often get confused about what to do with these activities in the textbook. For the activities to be performed, we need the support of our peers, because most of the activities are group activities. Many doubts pop up when we start doing them at home. In ‘real’ classes, the teacher would have been a great support in clearing such doubts when completing the activities.”

The helplessness of both teacher and students is clear here. And yet somehow, in the last year, students still managed to ‘complete’ group activities alone at home! This farce will repeat this year as well. Teachers are forced to promote it as the allotted scores for such assignments are considered critical for a child’s learning.

Both teachers and students make these compromises knowing that this is not what they are supposed to do, or how learning is supposed to happen. Clearly, digital alienation puts the future of coming generations at stake. A revised and organic teaching-learning process in the classroom is the only panacea.

Blending Learning for the Future

The models of education proposed by Rabindranath Tagore in Santiniketan, John Dewy in his experimental school in Chicago, and Paulo Freire in his path-breaking work Pedagogy of the Oppressed reiterate that freedom is not something to be ‘given’ to students—but to be taken by students in their pursuit of learning.

In a similar vein, the biggest takeaway of the digital classroom is the freedom of action it gives the student. Enabling this freedom in the classroom would be sweeter for our children when they begin attending their now-closed schools. As a teacher myself, the whole purpose of the ongoing COVID-19 vaccination drive should be to make this free and equal tryst between teachers and students in the social setting of a classroom a reality.