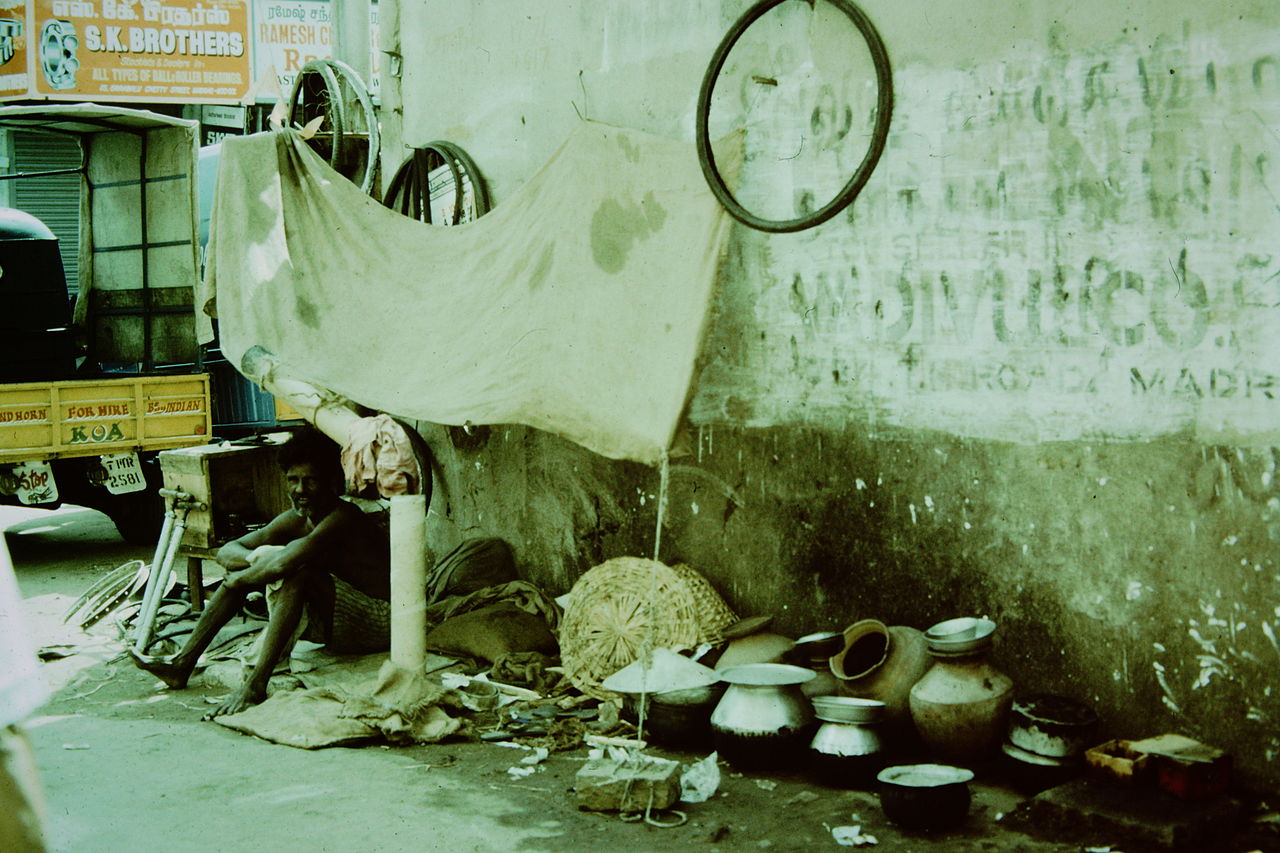 11:30 am: women begin entering a large rectangular hall. For most women, this space is familiar; although it is just an empty hall with minimal furniture, it has become a space of their own in a place otherwise unknown to them. Some women grab the jhadu (broom) and begin sweeping the dull, green tiled floor, while others roam around the space. Some sit in silence listening to the radio, reading the newspaper, colouring. There are also those who cry in fear of their fate, not knowing where they are or what is going to happen to them next. Most custodial institutions in India do not provide for a space that protects the dignity and enhances the worth of their inmates; to some extent, the confines of this large hall are an exception to that.

These women are inmates serving their custodial sentences at “Beggar’s Home” or Shaskiya Bhikshakari Graha, in Mumbai. This “home” is actually a detention centre for women charged under the Bombay Prevention of Begging Act of 1959.

As per the Act, “any police officer or other person authorised in this behalf in accordance with rules made by the State Government, may arrest without a warrant any person who is found begging.”

At the end of the large hall are two tables surrounded by chairs meant for the social workers of Koshish. The initiative was started in 2006 by Muhammad Taarique, with the primary objective of repealing the 1959 Act, which blatantly criminalises beggary. Koshish’s social workers liaise closely with these detained women; however, Koshish calls them clients as they provide them with free legal aid, counselling services, and some facilities for their rehabilitation.

Yet, despite the best efforts of Taarique and his team, nothing compensates for the fact that most of them do not deserve to be in this home. Every now and then, a few women rightfully go up to the two tables and ask Koshish’s team members, “When will I go home?”

A Brief History of the Bombay Prevention of Begging Act, 1959

The most pressing critique of the Act is that it is unreasonably punitive: that is, it does not account for the circumstances that lead a person towards deprivation, destitution, and “beggary”.

The Act is also dangerously oblivious to the historical discrimination faced by denotified communities in India. In doing so, it perpetuates a colonial mindset much like the Criminal Tribes Act of 1871, introduced during the British Raj. This infamous Act deemed many ethnic and social communities (most notably the hijra community) to be innately criminal and “addicted to the systematic commission of non-bailable offences.”

In other words, these communities were considered to have a tendency to be habitually criminal, and so, they needed to be monitored regularly, and punished when necessary.

This punitive disposition is reflected in the 1959 Act too. The police can not only arrest anyone who is found begging, but also, anyone “having no visible means of subsistence and wandering, about or remaining in any public place in such condition or manner, as makes it likely that the person doing so exist [sic] soliciting or receiving alms.” A slight suspicion is sufficient for the police to arrest someone, without any evidence of the “crime” itself. In most states, under different legislations aside from just the 1959 Act, courts also have the power to convict family members who are financially dependent on the person arrested for begging.

The wording of the 1959 Act specifically betrays a clear bias against beggars, extending disproportionate punitive force towards an arbitrarily defined “crime”. That states treat begging as a cognizable offence adds to the absurdity. How can begging be considered to be a cognizable offence in the same breath as offences like murder or kidnapping? Clearly, the fact that the police do not require a warrant under the Act has little to do with the nature of the crime, but more to do with conveniently disguising the failures of the State when it comes to providing for the country’s destitute.

For example, in 2018, the Delhi High Court decriminalised beggary in the national capital, perhaps in the aftermath of the 2010 Commonwealth Games. Amidst other controversies, the State drew flak for expediting the arrest of beggars in Delhi, in what was a desperate attempt to present a poverty-free image of India to the world. A few weeks before the Games were scheduled to begin, the Delhi government increased the number of mobile courts from one to three; a magistrate sat in a minibus and drove around Delhi prosecuting beggars to hasten the process and “beautify” the city.

Meet the Inmates at Beggar’s Home

Ahead of the 2010 Commonwealth Games, in 2009, an official from the Delhi government estimated that  95% of Delhi’s beggars came from outside the city, searching for  better economic prospects. The same seems to be true for those residing in Mumbai’s Beggar’s Home.

Most inmates at Beggar’s Home were not from Mumbai, nor were they all lifelong beggars. They were mostly poor, mentally ill, disabled, hearing-impaired, addicts, or victims of abuse. That being said, not all of them came from economically vulnerable backgrounds: one client was a cashier at a bank in Ooty, Tamil Nadu, and used to enjoy a stable life in the hill station. But, because of a few unlucky events that we don’t know of, she wound up at Beggar’s Home. Koshish was able to get in touch with her family, but nobody was ready to take her back.

Many other women at Beggar’s Home ended up there by mere “accident”. When Juhi* came to Beggars Home, she wouldn’t speak, or eat, and couldn’t remember details about her family or her home address. After months of counselling and rehabilitative efforts by Koshish, she regained her memory and was able to tell us bits and pieces of her address. Koshish was able to contact her family in a village in Bihar. Her family was not interested in taking her back, so Juhi was sent to a shelter home in Bihar, where she passed away in April of 2020, presumably from COVID-19—although delayed COVID-19 testing leaves her exact cause of death ambiguous. Juhi belonged to the Musahar caste, a Dalit caste.

So, how exactly do people like Juhi accidentally end up at Beggar’s Home?

The police conduct regular raids in certain spots across Mumbai and arrest people suspected of begging. For those who have not previously been detained under the Act, the Magistrate Court in Mumbai’s Kurla neighbourhood solicits a summary inquiry on the allegation of begging. Till the inquiry is made, the person is remanded in custody at a “receiving centre”—like Beggar’s Home. It is likely that this is what happened to Juhi.

Koshish plays an active role in representing their clients at this stage. Due to the arbitrary definition of begging, many remanded in custody at Beggar’s Home are not “beggars”: and so, Koshish works with the Probation Officer and every client to ensure the release of the wrongfully convicted. However, like in Juhi’s case, many clients that come to the Home are unable to remember key personal information. In that case, Koshish gathers as much information from the client as possible, and then follows up on leads with the help of the police and other women’s welfare departments.

Take the case of Maya*, who came to Beggar’s Home in remand custody. She was able to tell us bits and pieces of her home address, through which we were able to contact Inspector Jairam* at the Kurundwad police station in Maharashtra’s Kolhapur district, some 400 kilometres from Mumbai. Helpful and earnest, Inspector Jairam found Maya’s home in less than three hours. The very next day Maya’s husband and mother-in-law arrived at Beggar’s Home, relieved to see that she was safe. Her husband informed us that Maya had left the house a couple of times and that she had recently stopped taking her psychiatric medicine.

This is the other side of the coin, hidden behind the draconian nature of the Act: that despite the unnecessarily punitive framework of the law, some agents of the State work to help the vulnerable and unjustly detained.

However, while Maya’s case is not exceptional, it is hardly the norm. It is often difficult to find the families of the clients, and in the absence of these personal histories, arguing against the allegation of begging in Court is a challenge. In these cases, the Courts detain them for a year. Post their release, if they are found to be begging again, the law allows them to be detained for ten years.

This shows a lack of accountability on the part of the State: the Act places all the burden of identification and rehabilitation on the beggar, without providing necessary infrastructure for the impoverished.

Towards A Dignified Vocabulary for “Begging”

The only way to go forward from here is to redefine the problem: it is obvious that the issue is not begging and that defining it as such lends a negative connotation to the public perception of beggars. They are viewed as scammers, as lazy citizens who can make a living but choose not to. This could not be farther from the truth: clearly, the people affected by the Bombay Prevention of  Begging Act are not members of begging rackets and mafias, nor are they lazy.

Nevertheless, this perception enables the State’s evasion of rehabilitation. To address these issues in a fair way, a new vocabulary surrounding destitution needs to be developed to combat the negative connotations that terms like bhikhari and beggar elicit in current times.

Of course the reason this will prove to be a difficult exercise: as it will bring to the surface the fact that there’s more than one problem. What is now being clubbed under the umbrella term of “begging”, is actually the product of economic and caste-based disparity, a lack of employment opportunities, poor access to medical facilities, non-existent infrastructure for the differently abled, and lack of rehabilitative infrastructure for those who never make it back ‘home’.

This change will take a long time to materialise, but while we wait for the law to be repealed across the 20 states where it is used, there are still certain amendments that can be made to the overall policy ecosystem for India’s “beggars”. The Mukhyamantri Bhikshavriti Nivaran Yojana introduced by the Bihar government in 2020 is a great example of one of the many steps states can take to sensitise the process. Under the scheme, instead of convicting persons under the Act, open homes and rehabilitative centres are set up to welcome destitute populations in these homes—they were not forced to stay in them. The scheme also offers entrepreneurial opportunities and vocational training for beggars.

In the meantime, Koshish also works with many police officers, women’s welfare departments, NGOs, and shelter homes to provide some rehabilitative structure to their clients. It is heartening to see this alternate infrastructure emerge from within an oppressive framework to support the homeless. Without the effort of these outfits, many convicted under the Act would unjustly remain at Beggar’s home for many years.

*Names changed. | Featured image used for representational purposes only: the homeless in Chennai’s “slums”, captured  in the 1980s; courtesy of Hans Muller, the  Institute for Housing and Urban Development Studies (CC BY-SA 3.0).