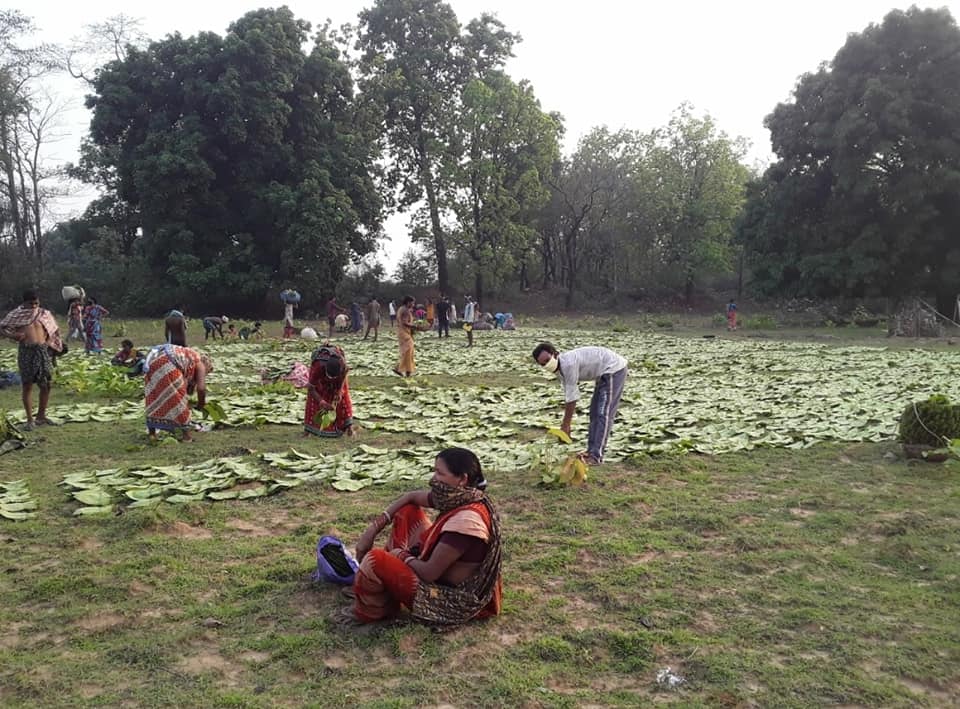 “We fear that we will run out of cash and food soon,” says Subhashree Madi, a member of the Mahila Jan Shakti Sangathan of Totrel village in Malkangiri district, Odisha.

For the four weeks since the nation-wide lockdown was announced on 24 March 2020, Madi and other women of the Koya tribe had been unable to collect flowers, fruits and firewood from the nearby forest. The area that they would visit every day to earn a living was being patrolled by police who urged residents to stay at home.

March and April was the peak season for harvesting the forest’s mahua flowers, taal leaves, koron seeds, siali leaves etc. Mahua (Madhuca Longifolia) is a tropical tree whose flowers are used to make jams, medicines and alcohol. The fruit usually sells at ₹15 per kg, with each family selling a quintal every week.

Sixty to seventy per cent of these tribal communities’ income comes from selling Minor Forest Produce (MFP) that is collected between March and June. According to the Scheduled Tribes and Other Traditional Forest Dwellers (Recognition of Forest Rights) Act, 2006 a Minor Forest Produce consists of all non-timber forest produce of plant origin and includes bamboo, brushwood, stumps, canes, tusser, cocoon, honey, waxes, lac, tendu/kendu leaves, medicinal plants and herbs, roots, tuber and the like. As per a report from Vasundhara, about 6 million Scheduled Tribes (which is 86% of the total Rural ST population) are critically dependent on forests and forest resources for their survival.

In Malkangiri district, 74 CFR titles have been recognized under the FRA 2006. This gives the local communities rights to collect NTFP from their forests for sale, apart from the rights to protect and conserve their forests. For Madi and 350-400 million other forest-dependent Indians, the lockdown has led to a loss of income, insufficient food and an uncertain future. “We can’t hold our weekly haats… the middlemen who connect us to the market aren’t allowed to meet us either. The forest products we have collected can rot and our labour will go to waste,” laments Madi.

“The MFP acts as the economic backbone for women,” says Giri Rao, the Director of Vasundhara, an environmental organization based out of Odisha. He goes on to explain how this economic loss has gendered consequences, citing that “eight out of ten MFP gatherers are women. The repercussion [this lockdown has] on their lives will become clear over time. Traders haven’t been able to purchase any produce from Deogargh, Kuchinda and Sambalpur districts.”

Although Scheduled Tribes comprised ~8.6% of India’s population as per the 2011 Census, they made up one-fourth of those living in the poorest wealth quintile, according to the World Bank. This wealth disparity disproportionately affects some families; the NFHS-4 (2015-16) found 45.9% of ST members to be in the lowest wealth bracket, compared to 26.6% of SCs and 18 .3% of OBCs.

In the view of the unprecedented situation due to #Covid_19 prevailing in the country, Ministry of Tribal Affairs has decided to offer support to the tribal gatherers by revising MSP for MFP & relaxing the existing provision in the scheme. @PIB_India @MundaArjun @renukasinghbjp pic.twitter.com/UYTlpbZHkQ

As of the 1st of May, the Ministry of Tribals Affairs has directed state governments to increase the Minimum Support Price of non-timber minor forest produce for 46 items. There has been an increase of 76.5% (₹17 to ₹30 per kg) for dried mahua flowers, 66.7% (₹30 to ₹50) for hill broom grass and 53.8% (₹130 to ₹200) for rangeeni lac. Malkangiri district has also been declared as a Green Zone, meaning small-scale trading may have hopes of resurrection soon.

“Since the lockdown was implemented we are eating rice, dal and potatoes. We haven’t been able to buy any vegetables or meat,” says 50-year-old Nalini Mahakul, an MFP collector in Netrabahal village of Deogarh in Odisha. She earns ₹40,000 annually by selling mahua, chuari and sal leaves. This income is supplemented with earnings from a small piece of farmland that she owns. Her 18-year old son Shivaji, who hasn’t been called back to Barbil for work on a steel plant, is unsure when they will see some money again. “My mother has developed a tumour near her jaw and the doctor has advised us to get it operated soon. I don’t know when work will start again and her medicines are also over. I have to find out how I can go [to town] and buy some medicines but I am afraid. My friends have sent me videos on WhatsApp of policemen hitting men who are out on the streets.”

Nalini adds, “we are currently surviving on the ration given under the Public Distribution Scheme. The quantity provided by the government has been calculated to last three months but I don’t think it is enough to last us till June”.

The fact remains that 63.5% of the Scheduled Tribes in rural Odisha fall below the poverty line. There are even districts that the PDS has not even reached, where people in need are considered ineligible for welfare by the Indian government. Even in the Maoist affected districts of Odisha – Malkangiri, Nuapada, Koraput, Gajapati and Sundergarh – attempts to supply ration under the PDS were made only after an audiotape surfaced of a man who identified himself as the secretary of the Maoist group known as Malkangiri-Koraput-Visakha Divisional Committee (MKVDC). He declared a ceasefire and assured government field officers, who usually refrain from venturing into these areas, that they can carry out relief work without any threat. Addressing the government in Telugu, he even asked for the provision of essential supplies, health-care services, pension and ration to deserving citizens via the PDS.

Life on the Margins

Several people struggling to arrange meals on an everyday basis during the lockdown are also excluded from benefiting from the PDS because they haven’t linked their Aadhar to their ration cards, which was made mandatory by the Odisha government in 2019.

“People are being excluded from the PDS because of spelling mistakes on their ration or Aadhaar card. In some families, one or two members benefit from the PDS and are able to share it with the rest of their family. But, there are many families where no one is eligible to benefit from the PDS,” says Laxmidhar Singh, a member of Indigenous Peoples Forum, Odisha.

For Madi and others from her community, this story of exclusion and erasure from government records is an old story. Under the Naveen Patnaik government tribal areas like Kalinganagar, Niyamgiri and Dhinkia have suffered from land sharks, forced displacement and violence for resisting industrial projects that disrupt their lives. From selling forest produce to accessing basic state-welfare like the PDS, the exclusion of tribal communities amidst the lockdown is hardly an aberration. If anything, the case of Madi and the Koya tribe represents the margins that tribal populations live within; they are stuck negotiating between an inertial State and daily activities that ensure their sustenance.