THE BASTION
Read Another
Opinion 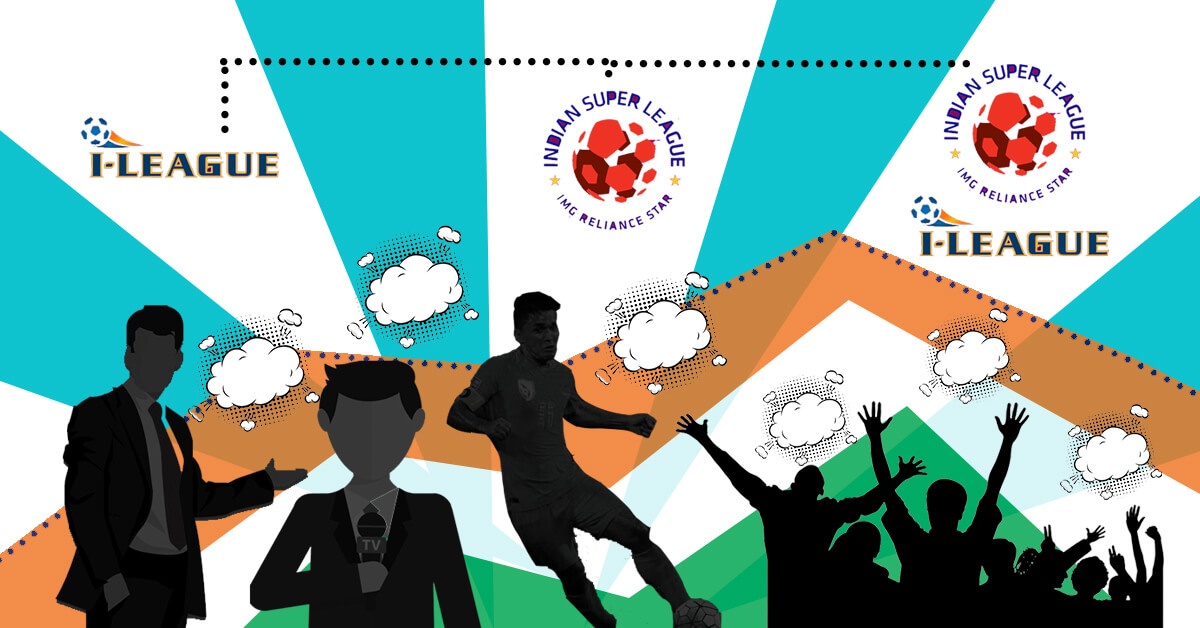 Our recently published analysis on How the AFC is Painting Indian Football’s Evolution discussed the role of the Asian Football Confederation in creating a new roadmap with the All India Football Federation (AIFF). The roadmap merges the ISL and I-League to create a multi-tiered league format with more teams featuring in the ISL, an increased number of games per season and promotion and relegation battles set to take place by 2024-25.

While our piece argued that the ISL has come under unfair scrutiny for metamorphizing football in India and how the Indian national team will have lots to gain from the proposed merger and increased matches, we were also privy to perspectives that went beyond these arguments. It seems clear that Indian Football’s canvas will be painted by many many more stakeholders in the years to come, from supporters and broadcasters to club owners and league administrators.

More matches mean broadcasting more matchdays across national television in an already packed sports calendar in India. Longer leagues are yet to be tested, especially given how Indian fans seem used to shorter formats of engagement with sports. So, although the proposed recommendations would give Indian footballers more international exposure and improve the level of domestic cup competition, the logistics of this transformation are unclear. With the canvas set, we ask our palette of football personalities a very simple question: how will this proposal affect different stakeholders, and what should we watch out for in the years to follow?

“…once they are included via the AFC roadmap, legacy clubs will bring a new culture to the ISL. The tradition of supporting clubs like East Bengal and Mohun Bagan are quite different… these [I-League] teams have had fan bases for almost 45 to 50 years now”

— Conrad Barreto, Chairman at Gaur Army & Co-Founder of The Football Dug Out

“The strategic evolution of the ISL hinges on it being backed by a major industrial group in the form of the FSDL. It will simultaneously have to keep an eye on the functioning of the I-League 1 and the 2nd division because they form the base and supply of the club football structure“

“…we are dealing with different categories of fans with this new roadmap. The ‘new-age’ fan is primed to be engaged for 2-3 months, the ‘old-age’ fan prefers the Kolkata League or the Goan League, and the European football fan sticks to their club from August till May. It will be interesting to see how Star takes up this challenge”

First off, think the roadmap is a great step ahead. Launching a unified system for the I-League and the ISL with promotion and relegation is the right step for Indian Football in the long run.

Having said that, I am unsure if the ISL will continue with the playoff system, wherein the top four teams play knockout games to win the title. As long as playoffs exist, there is always a possibility that fans may turn up in larger numbers closer to the playoff time, for teams that are near the top 4. There may also be a lull in the middle of the season.

However, the new proposal is likely to have a full-fledged league format with 16 teams in total. Once this happens, I do not believe there will be a lot of fluctuation in the number of fans attending games. Of course, it depends on what days of the week they decide to hold games; crowds are typically better on weekends because of work and other commitments. If anything, those teams which have nothing to play for or have already been relegated by the end of the season may see a fall in attendance numbers.

Of Traveling Supporters and Legacy Clubs

Supporters club are run in many ways. Some are supported financially by fans, some through sponsors, and some are even funded by the club itself. For example, FC Goa helps procure match tickets when we travel for away games. This is quite a large amount for the club, given that tickets are ₹300 or ₹400 and supporters clubs have about 80 to 90 travelling fans. So, even with 16 teams in the fray, I do not see fans getting ‘bored’ or ‘tired’ of travelling, especially if games are scheduled well.

While we’re on the topic of travelling, let’s also acknowledge the fact that the ISL seems to be trying to stick to a one-club-per-city kind trend, although the roadmap mentions nothing of the sort. This past season was supposed to see an increase in the number of teams, which is on hold for now. So, it is unclear where and how a club like East Bengal will figure in these plans. However, once they are included via the AFC roadmap, these legacy clubs will certainly bring a new culture to the ISL. The tradition of supporting clubs like East Bengal and Mohun Bagan are quite different from what most of the current ISL clubs experience — you cannot discount the fact that these [I-League] teams have had fan bases for almost 45 to 50 years now, which will definitely add value to the spectacle of the Indian Super League.

I’ve had the privilege of witnessing the Indian Football evolve over the last two decades as an industry professional. It is a privilege because not many can transform their passion into a profession; I have been fortunate to stay close to the game that we all love, right from playgrounds to boardrooms.

This journey also gave me a good look into FIFA and AFC’s efforts of collaborating with India’s apex body, the All India Football Federation (AIFF). These efforts culminated in the creation of the AIFF Football House, which is vital for managing and developing Indian Football. This collaboration has also created several opportunities for the Blue Tigers’ visibility and recognition at the international level. Qualification to the AFC Asian Cup in 2011 was a giant leap in that direction.

However painful it might be to endure, one cannot expect Indian Football to simply grow overnight. Around 2012, a disruption in the form of the Indian Super League came to life, which had a lasting impact on the league system of competing in India. The ISL was a bigger disruptor than the National Football League’s transition to the I-League way back in 2007-08. Around the same time, other club and state competitions like the Federation Cup, Santosh Trophy, Durand Cup, National Senior Men’s and Women’s Championships and lower-age-group tournaments also underwent major shifts in their relative importance and investments.

With this as the backdrop of Indian Football, I believe it is imperative to build a plan for the next 20 years in mind. The solutions put forth today need to be long-term and economically viable for all stakeholders, from the club owners to players in academies. The strategic evolution of the ISL hinges on it being backed by a major industrial group in the form of Football Sports Development Limited (FSDL).

The FSDL will simultaneously have to keep an eye on the functioning of the I-League 1 and the 2nd division because they form the base and supply of the club football structure.

Also, the erstwhile Federation Cup and newly branded Super Cup need to be seriously redesigned to integrate seamlessly with the regular league season.

One does not have to look far to recognise the advantages of having a cup competition parallel to the regular league season. More matches that cover larger geographies and garner greater attention are just a few benefits. Logistical challenges exist, but these are outweighed by the benefits of spreading ‘football fever’ via club competitions across our country.

The AIFF’s approach must be more inclusive for a competitive structure to bring in more action, engagement and resources that will drive the growth of football in India.

Let’s look at how the Indian Super League started off. It was an 11-week ‘tournament’ that resembled cricket’s IPL. Slowly, it evolved into a league that was played over five to six months. The first season of the ISL garnered interest in Indian football amongst a lot of people, but there was a drop in fan engagement in the subsequent seasons. This drop could be attributed to the general obscurity regarding the League’s future vis-a-vis the I-league and lesser money being spent on marketing.

So, tomorrow, with a longer and bigger league, the question becomes this: even if you are reaching out to larger audiences, will they stick throughout the season? Indian fans seem to have a short attention span, which is evident when you think of the success of the Indian Premier League, the Premier Badminton League or the Pro Kabaddi league.

The exception to this seems to be our interest in European football. If Indians can follow a season in England or Spain from August to the end of May, how can we do the same for Indian football, where a broadcaster looks at a long season and can say “not only do I have a steady audience, but it is one that is growing”?

Remember that we are dealing with different categories of fans with this new roadmap. The ‘new-age’ fan is primed to be engaged for 2-3 months, the ‘old-age’ fan prefers watching the likes of the Kolkata League or the Goan League, and the European football fan sticks to their club from August till May.

It will be interesting to see how Star takes up this challenge. As of now, the different sports leagues in India align perfectly within the calendar year, without overlapping as such. Now, with Indian football looking for a way to go from hosting 27 marches to 40 in a season, the dynamics of broadcasting is definitely set to change. Besides broadcasters, strategies for engaging each fan category is something that both leagues’ administrators and franchisees will have to take into serious consideration.

While on the topic of engaging viewers, an important factor with the new roadmap for Indian Football will be whether the ISL retains its playoff system. Proper leagues (think of European standards) do not have playoffs. However, from my personal experience, the playoffs are a special interest point for fans to rally around. This is because the team who finishes top of the regular season doesn’t necessarily win the playoffs and the title.

Things have become even more tricky with the COVID-19 pandemic sweeping the world. The past few ISL seasons have gone to show that clubs which are willing to spend money tend to engage more viewers at home and fans in stadia. For example, Mumbai City FC owes some of the fanfare surrounding its positive start in the inaugural season to marquee signings like Nicolas Anelka and a greater spend on marketing. Now, franchisees will have to exercise caution while opening their purses to ensure their businesses continue to operate successfully.